Five Kickers You Need to Play in Week 11 (and Two to Trade for!) 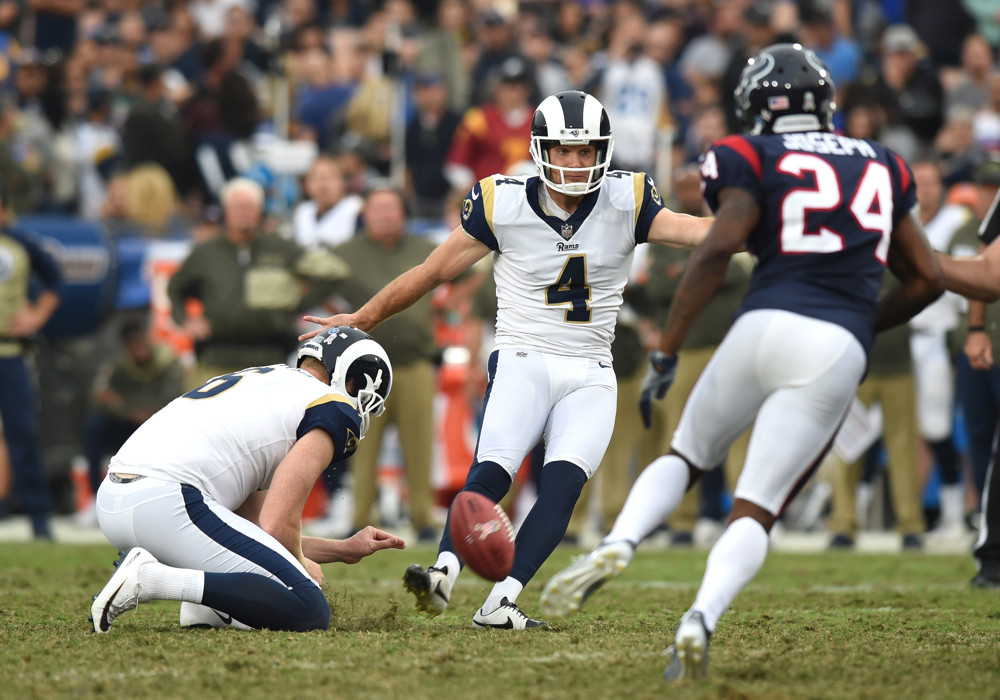 It might be time to talk about just how insanely good Greg Zeurlein has been this season. Zeurlein has made 28 of his 29 field goal attempts and all 30 of his extra point attempts. He leads the league in both field goals and extra points and has an absurd 114 points already. That's actual NFL points scored, which means that Zuerlein himself has scored only 23 fewer points than the entire Miami Dolphins roster. Zuerlein is on pace for an insane 203 points. The record for points by a kicker is 166, so Zuerlein is on pace to break the record by 22% and do so in his 13th game. The record for points by any player was 186 by LaDainian Tomlinson, so he may well beat that too. Like it or not, Greg Zuerlein is one of the most valuable fantasy assets at any position in 2017, and he won't slow down here against a Vikings defense that has allowed the sixth most field goals of any team.

A lot of folks draft a kicker in the last round and never look at the position again outside of a bye week. Those guys don't even know who Harrison Butker is, since he wasn't on the Chiefs roster in August, and that's a mistake. Butker has kicked a whopping 19 field goals in his six games with Kansas City. His 11.7 points per game is second among all kickers behind only Zuerlein. In fact, his 11.7 points per game would pace to an NFL record point total for the season over 16 games, and yet Butker is still on waivers in some leagues. Pick him up, or for heaven's sake, make a trade offer. Kickers are people too.

If you had to sit down and make a list of kickers, Tucker would probably be one of the first (if only) guys you'd come up with. He's been kicking for the Ravens for years and is as steady as they come, and just as good from distance as up close. This week he'll face a Packers defense that is one of seven teams in the league to have allowed at least 20 field goal attempts and extra point attempts. Baltimore should be healthier coming off the bye and see plenty of scoring chances in this one.

The Cardinals haven't fallen off a cliff with Carson Palmer out as Drew Stanton has more than held his own. Old guys Adrian Peterson and Larry Fitzgerald are still helping the team move the ball up and down the field, and that should give Dawson plenty of chances against a Houston defense that has allowed more points to opposing kickers than any team in football, just over nine per game. Dawson has a shot at double digits here.

Denver finally got their offense moving against the Patriots and should find some success against a Cincinnati defense that has slowed down since their early strong start. The Bengals have allowed the second most field goal attempts in the league at 21, so McManus should get his chances. All the better that he'll do it in the thin Denver air, especially if your league awards bonus points for distance.