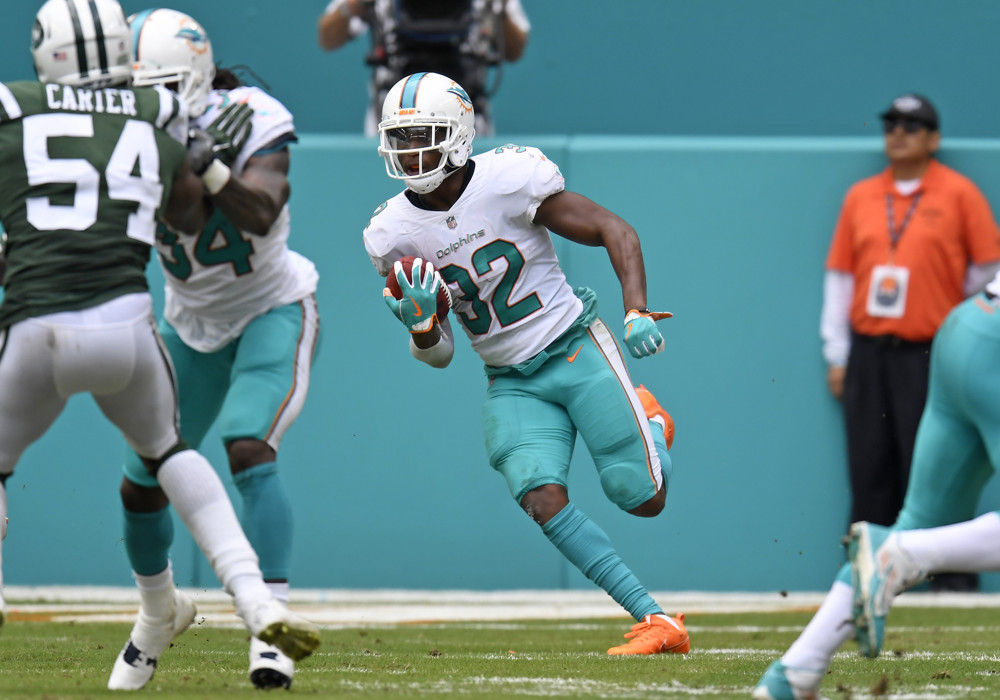 Two games into the post Jay Ajayi era at Miami, there's little question as to which runner looks better out of the Dolphins backfield. Damien Williams has run 16 times for 33 yards, bringing his career yards per carry down to a miniscule 3.1. Kenyan Drake has 16 carries too, but for 151 yards, almost ten yards a pop. He's been explosive and should be in line for more work, and Tampa's run defense is there for the taking. Drake could be one of this year's hot running backs down the stretch, and this could be his breakout game.

The Bears weirdly threw Benny Cunningham out there for almost as many snaps as Jordan Howard this week, but Howard is still the guy for this Bears team and he should get back on track against a leaky Lions run defense. Detroit has already allowed eight rushing touchdowns this season, second most of any team, so Howard has a great chance to find the endzone. He's ranked outside the top ten running backs this week but could be one of Sunday's top plays.

Don't look now, but Dion Lewis has actually taken over the New England backfield over the past month. He's had double digit carries in four straight games with a pair of touchdowns during that span, and he's been getting the goal line carries too. Now Lewis faces Oakland, a team that has allowed the fourth most rushing yards in the NFL. This is what the Patriots do they change the offense every week to take advantage of their opponent's biggest weakness. Last week against a stout Denver rush defense, the Patriots turned to Rex Burkhead and the short passing game. This is a Lewis game. He should be a solid play with a high floor.

The Patriots offense is rolling, and sometimes the best defense is a good offense that keeps the other team off the field. And that's where Marshawn Lynch comes in for the Raiders. Lynch had his best game as a Raider before the bye week with 57 yards and a pair of touchdowns, and he's seen his yards per carry tick over 4.0 in three straight games as he's slowly gotten into game shape. Now he's rested coming off a bye week and should be ready to rumble in a script that should feed him often. Lynch is all but forgotten in some leagues, but it could be Skittles times in fantasy again this week.

Like Lewis and Lynch, Doug Martin too is ranked outside the top 30 this week but looks like a solid spot start. Martin was back to his usual snap count, playing around 55% of them this week, and he continues to see around 20 touches a game and all of the touches near the endzone. That should finally pay off against a bad Dolphins run defense that was just gashed Monday night by the Carolina rushing attack. Only three teams in the NFL have allowed more running back touchdowns than Miami, so Martin will hope to keep that trend going in this hurricane makeup game.