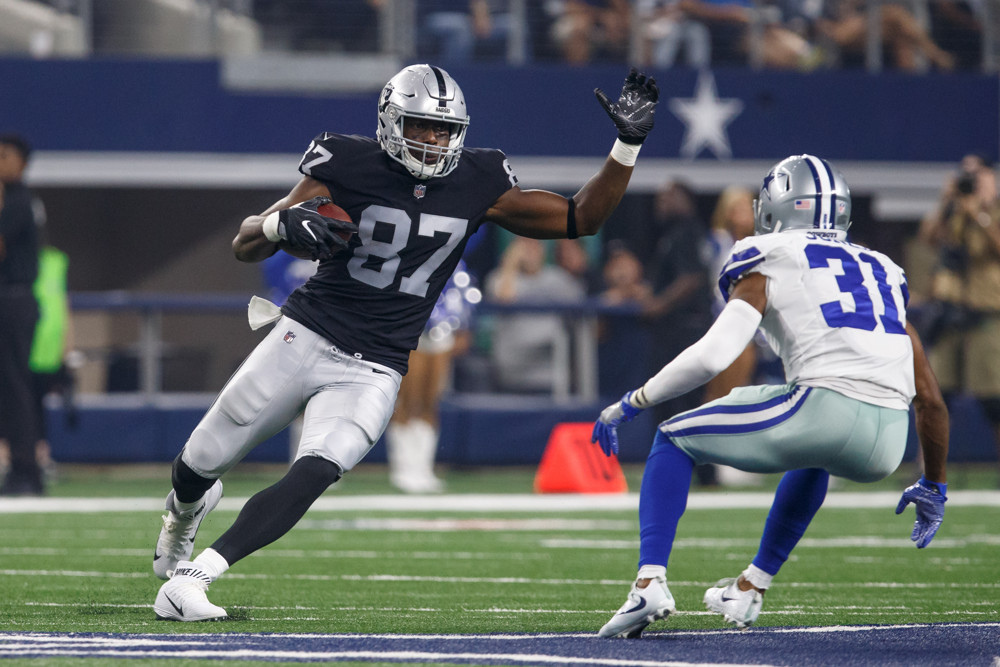 Denver and Oakland match up in what looks like the game of the week, a tough AFC West battle that lost a bit of its luster after both teams lost on the road in Week 3. Denver couldn’t move the ball in Buffalo, and Oakland didn’t even have a hundred yards in Washington. Both teams need a bounce back offensively, so which players might step up?

Denver’s pass defense isn’t as tough as it was a year ago with seven pass TDs allowed already, but they’ve held opponents to 214 yards per game and Carr is averaging 203 himself. He’s not worth a start on a week with 31 other teams playing.

Lynch has played fewer snaps and seen fewer carries each week, down to just 16 snaps and six rushes against the Redskins, and Denver has allowed the second fewest points to opposing RBs in 2017. You should consider another option if you have one.

Cooper has seen his receptions decline each game but is still playing more snaps and seeing more targets than Crabtree. Cooper was the better Raiders WR in both matchups last year so he’s still the better play but probably won’t have a big game.

Denver was the #1 pass defense in the league last year. They haven’t been as stingy this year, but Crabtree had just 7/74 in two games against the Broncos and struggled through injury last week. He’s a low-end play this week.

Cook is the surprise Oakland reception leader so far, with at least five targets each game, and one rare Denver weakness is against tight ends. He’s worth picking up, and probably playing.

Siemian stumbled against Detroit but still has six TDs in three games, and Oakland continues to allow a lot of points to opposing QBs, just like last year. He could be a back end start with upside for more.

Anderson had a quiet Week 3 but isn’t losing playing time or touches to Jamaal Charles, and he should bounce back for a steady RB2 week, though Oakland and Denver are two of three teams that haven’t allowed a rushing TD in 2017.

Thomas and Sanders continue to be 1a and 1b for Denver, but Thomas posted the best numbers among Broncos WRs against the Raiders in both games last year. He’s a WR2 with upside.

Sanders leads the Broncos in targets and trails Thomas by only one reception. He has been just as good a play as Thomas for a couple seasons now and looks like a good WR2.

You drafted Denver’s defense high to play them every week, but the Broncos D/ST only scored five points in two games against Oakland last week. The Raiders tend to limit mistakes, so this might be a week to look another direction.