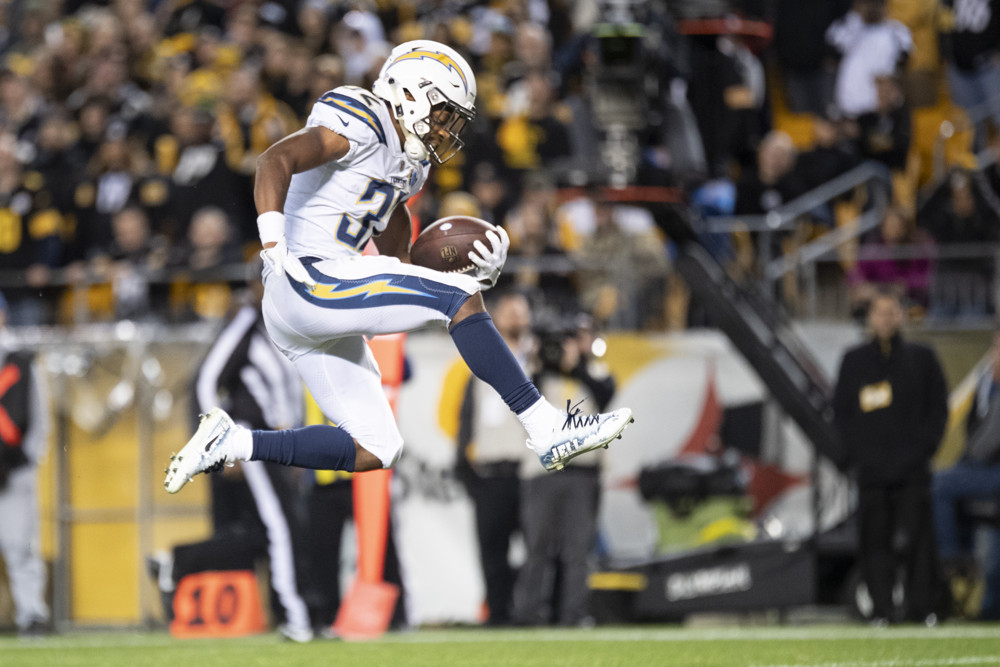 Playoffs are officially upon us, and if you survived some flops from your star players (I'm looking at you Gurley, Cooks, Brees, Kamara, Brown etc etc), you may be looking elsewhere for an answer. Others of you that are playing random players just to try and survive might have lived to see another week of playoffs. For most of you, you probably aren't looking to make too many changes to the team that got you here in the first place. Either way, here are some players to look at if you are in need, and some players you should grab as handcuffs in case your guy misses time.

Justin Jackson saw his success from Week 13 destroyed in Week 14, carrying the ball 7 times for 12 yards and catching 2 passes for 23 yards against the Bengals. It was a very disappointing day for Jackson (and fantasy owners). The Chargers seemed to favor RB Austin Ekeler and Jackson did nothing with the opportunities he was given. That being said, Ekeler was injured late in the game and may miss Week 15 since they have a short week. If Ekeler and Gordon both miss, Jackson is a must start against a very susceptible run defense. Jackson should be added if you are the Gordon/Ekeler owner just in case.

Elijah McGuire handled a majority of the workload in Week 14 against a tough Bills' defense. He rushed 17 times for 60 yards and 1 touchdown. He also caught 3 of 4 targets for 23 yards. The good news for McGuire is that he may see a majority of the work again in Week 15 thanks to an Isaiah Crowell injury. The bad news is he faces a tough Houston defense. If Crowell does sit, McGuire will be a decent volume addition if you are in need of a RB.

Dante Pettis continued his touchdown streak in Week 14, catching 3 of 7 targets for 49 yards and 1 touchdown. This makes three games in a row with at least 7 targets and 1 touchdown. The nice thing is he did this even with the return of WR Marquise Goodwin and the ridiculous performance by TE George Kittle. The 49ers have looked good lately, and should have decent success against a Seahawks' defense that is the middle of the pack in points allowed to WRs.

The last time TE Greg Olsen went out with an injury, Ian Thomas didn't really show us anything that made us want to pick him off waivers. This time around it seems a bit different. Thomas now has 16 targets and 14 catches over the last two games. In Week 14 Thomas caught 9 passes for 77 yards. Unfortunately for Thomas, he faces one of the best defenses against the TE position: The New Orleans Saints. That being said, Cameron Brate did just catch 2 touchdown passes against them and QB Cam Newton will have to throw a lot to keep up with the Saints' offense (and terrible Carolina defense). Thomas is a decent option for those of you in the playoffs without Kelce, Kittle, Gronk, or Ertz.

The Kansas City Chiefs have a short week this week, playing Thursday night against division rival Los Angeles Chargers. On top of that, RB Spencer Ware may not play due to a shoulder injury. Now this is a stretch/rumor as of now, so don't get too excited. If you do own Ware, or have the space to do so, grab Damien Williams. Williams rushed 8 times for 14 yards and caught 4 passes for 16 yards and 1 touchdown in Week 14 against a tough Ravens' defense. Williams has shown flashes of greatness in the past, so if Ware can't go, Williams is a solid start in your playoffs.

You may be surprised that I don't have Atlanta's defense here, but I just don't trust them next week, even against the Cardinals. So instead I opted for a defense that has now put up double digit points five weeks in a row. The Saints sacked Winston 4 times, forced 1 interception, and only allowed 14 points against a team that put up 48 points in Week 1. The Saints have turned it around since then, and they take on a Carolina Panthers team that seems to only be able to use RB Christian McCaffrey. If the Saints shut him down, they should have an easy time defending the Panthers.