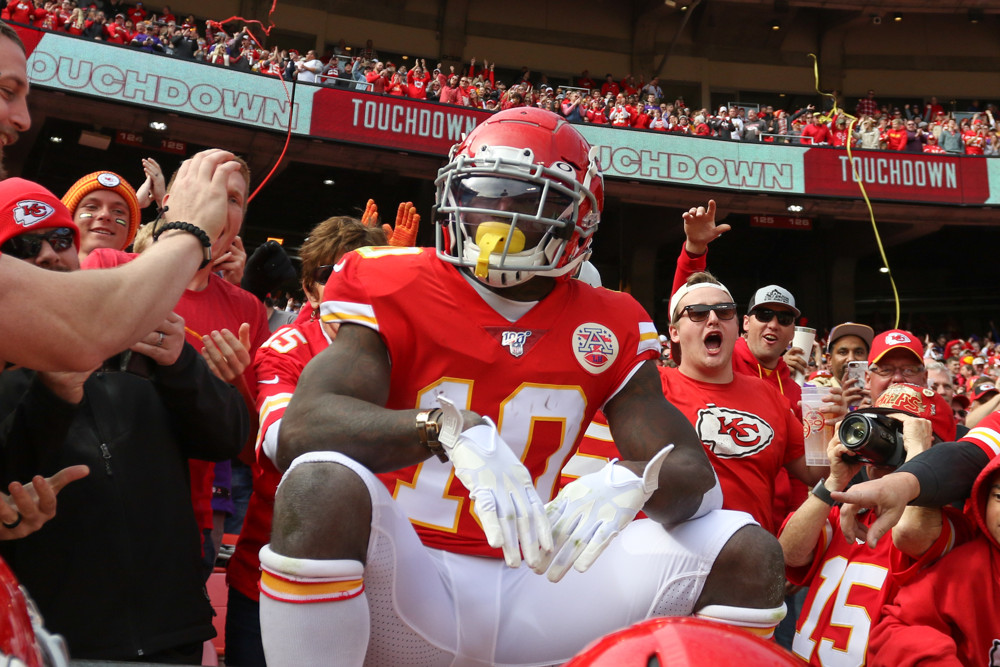 There’s a lot of articles out there about the standard half-PPR leagues for 10 and 12-team leagues, but what about when you are in a smaller 8-team league with some hometown friends and you don’t know what the best draft strategy is? Should you be the last to select a QB since the position has a ton of depth, go RB and WR heavy from the get-go, or if you should take a chance and draft the best tight end available during the first round or two?

Let’s explore some options on what you should do if you have a league with only 8 teams involved. Let’s look at one potential draft strategy that can be utilized in a league of this size. For this article, it is assumed the starting positional requirements are QB, RB, RB, WR, WR, WR, Flex, DEF but a similar approach would work with one more flex spot.

Load up on Running Backs with the First Few Picks

If you’re in a smaller league with a couple of flex spots, I would recommend loading up on running backs early, even in a half-PPR league. While there are only 8 players, the position will still fly off the board and there will be a ton of WR1 potential in rounds 4-8 to select from who will see a lot of targets, just without the flashy names of Tyreek Hill or Davante Adams. When it comes down to it at its core, wide receivers are much more easily replaceable off the waiver wire than running backs will be. First, the running back waiver wire adds will be in much more demand than a WR2 or WR3 on a team, and it’s a lot harder to get a safe floor at the position, where at WR, a few catches can get you a reasonable floor if you are looking to fill a flex position.

Be Open to Drafting a Tight End Early

In a small league with only 8 teams, you need to differentiate and gain an advantage somewhere since every team is pretty much guaranteed to look elite at the end of your draft. One way you can do this is by gaining an advantage at the tight end position - more specifically, Travis Kelce. In an 8-team league, there will be enough depth at RB and WR and you won’t be too far behind if you decide to select Travis Kelce early (late first-round or early second) but you will be (all but) guaranteed the TE1 who is more like a top-end wide receiver. Similarly, I would take Kittle or Waller early as well if Kelce is selected before your 2nd pick, and while you won’t have the top TE, the positional advantage will still remain in 6/8 weeks. When you compare your team to your opponent’s every week, you will feel similar at the RB/WR positions, but have a huge edge at TE which is what you need to pull away in smaller leagues.

Wait Until the Late-Middle Rounds to Find Your QB...and Pick a Couple

Quarterbacks are the most predictable position in fantasy football and we can use this to our advantage in an 8-team league. When we roster 2 or 3 QBs and don’t land one of the top-5 (where we feel obligated to play them regardless of the matchup) can play the QB that has the best matchup and the likelihood of maximizing our output at the position. Since QB is the easiest position to stream, I would rather load up on two or three quarterbacks than have to roster 5-6 running backs and wide receivers each and not know who to play. Once you have your RBs and WRs, there are no guessing games on who to start.

If you were to utilize the above strategy, you can end up with a roster that looks like this from the 3rd overall pick:

This strategy isn’t perfect but it gets you what you’re looking for - a stable of elite running backs to give you a weekly floor, a star tight end to have a positional advantage every week, wide receivers that have a chance at seeing well north of 100 targets each, and QBs that could finish as top-5 options with the availability to stream as needed. On top of this, you later add some depth to the RB and WR positions and you have yourself a great-looking team.

In an 8-team league it can become quite easy to fall into choice overload if you have 6-8 great RBs or WRs and, while depth is nice, I would rather stick with my core lineup and not have to make several lineup decisions every week if I can avoid it.