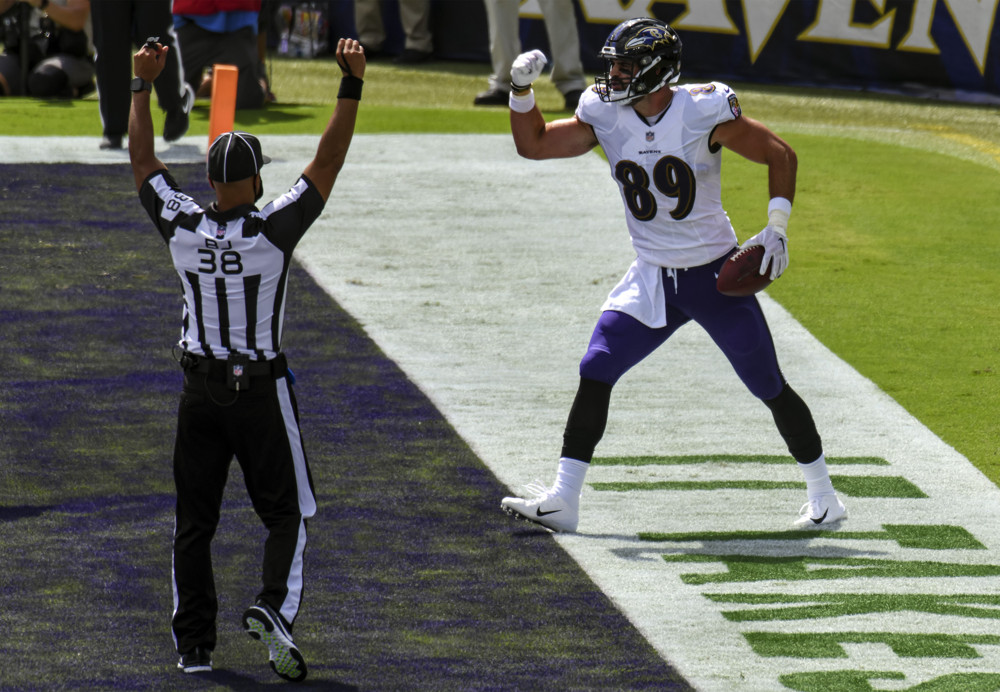 Mark Andrews had a prolific career at Oklahoma. He was a touchdown machine from the jump, catching 7 TDs in his freshman and sophomore years. However, his real breakout was his Junior year. On a team with both CeeDee Lamb and Marquise Brown, Mark Andrews had the most receptions in 2017, catching 62 passes for 958 yards and 8 touchdowns on the way to winning the John Mackey Award as the nation's top tight end. Despite the award, there were some questions about his overall athleticism and his blocking ability, pegging him simply as a slot TE. Because of these questions, and a relatively strong pass-catching TE draft, Andrews dropped to the third round and was selected by the Ravens with the 86th overall pick.

The Ravens were devoid of tight-end talent and they sought to address that issue in 2018 drafting both Hayden Hurst in the first round and Andrews in the third. With the only other tight ends on the roster being Maxx Williams and Nick Boyle who are pass/run-blocking tight ends by trade, and Hurst nursing an injury heading into the season, Andrews quickly became the go-to pass catcher in his rookie year catching 34 balls for 552 yards and 3 touchdowns.

Firmly entrenched as a pass-catching option, and with emerging chemistry with Lamar Jackson, Mark Andrews broke out in a big way in 2019, catching 64 passes for 852 yards and 10 (!) touchdowns. He finished fifth in the PPR fantasy rankings and looked poised to become a fantasy force moving forward in an emerging offense.

The sky appeared to be the limit for Andrews, especially after the Ravens decided to move Hayden Hurst to Atlanta. Unfortunately, that's not exactly how 2020 played out for Andrews. As a whole, the Ravens offense took a major step back in 2020, regressing from arguably the best offense in the league (second in total yards, first in touchdowns) in 2019 to a middling offense that ended last in passing offense. Not a great development for your pass catchers.

With little, to dare I say it, no support from the receiving core, teams keyed heavily on Andrews, providing bracket coverage consistently throughout the year. Not surprisingly Andrews also took a step back, catching 58 passes for 701 yards and 7 touchdowns. He remained a red zone force and still saw a steady rate of targets, but scored 17% fewer fantasy points and finished behind Logan Thomas in the final tight end fantasy rankings. Not the output that fantasy players were looking for when they spent considerable fantasy capital on Andrews in an attempt to gain a competitive advantage against a weak tight end position.

So uh, what to make of Andrews in 2021? I think that question really starts and ends with how you think the Ravens offense will progress. And that question has a couple of layers that we should look at. From a roster perspective, the Ravens had made key improvements to bolster their passing game. They've reshuffled a line that should be improved and more consistent in 2021, especially in pass protection. They've also overhauled the wide receiver position, an area of major weakness last year. With the additions of Rashod Bateman and Sammy Watkins, Lamar Jackson will have significantly more consistent options on the outside.

The other big question is, how much do you believe in the development of Lamar Jackson as a passer? Personally, I think he has plenty of development left and will continue to mature as a passer. That maturity accompanied by some real WRs should pay big dividends for Mark Andrews. But if you are skittish on his ability, then I can understand you not wanting to buy in for 2021.

I think the final two pieces of Mark Andrews' 2021 equation are his snap count and target share. Starting with his snap count, Andrews was still only on the field for 58% of the snaps last year. The Ravens are a run-heavy offense, but I think you can safely assume they will continue to get their best weapon on the field more often in 2021. Add in a monster target share of 25%, behind only Kelce and Waller, and Andrews is one of the safest buys at the position.

So add it all up and what do you have? In my opinion, Mark Andrews is an undervalued asset heading into 2021. With a solid offensive line, an offense ready to rebound, and a QB who still has significant passing upside, Andrews looks to be poised to be a top-tier tight end. Considering Andrews is being drafted around the 7th round, I would consider him a firm buy with 2020 being his absolute floor and exceeding 2019 as a very real upside.