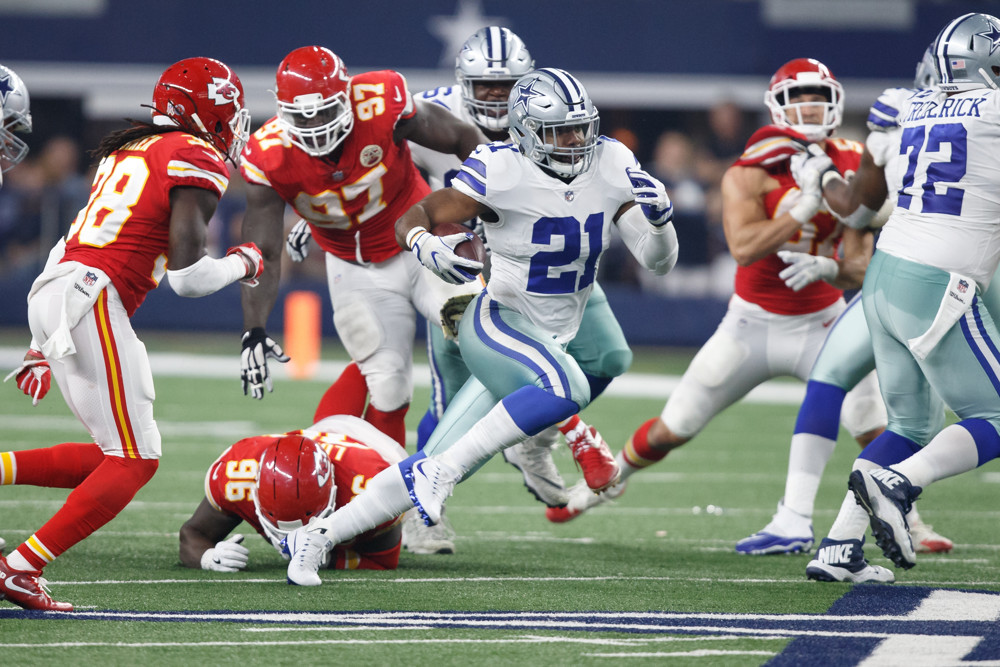 If you are anything like me, August 2018 seems way too far away. Another fantasy year has sped by us, and you may now find yourself checking your lineup or fantasy sites out of habit, only to find tumbleweeds and crickets. With that said, it's still always fun to scratch that fantasy itch with a mock draft. Now I understand the NFL playoffs haven't even started yet, but let's take an early look at what 2018 could potentially look like. We will look at some steals and potential reaches in a 12 team PPR mock draft. The arrows indicate the direction of the picks (snake draft). 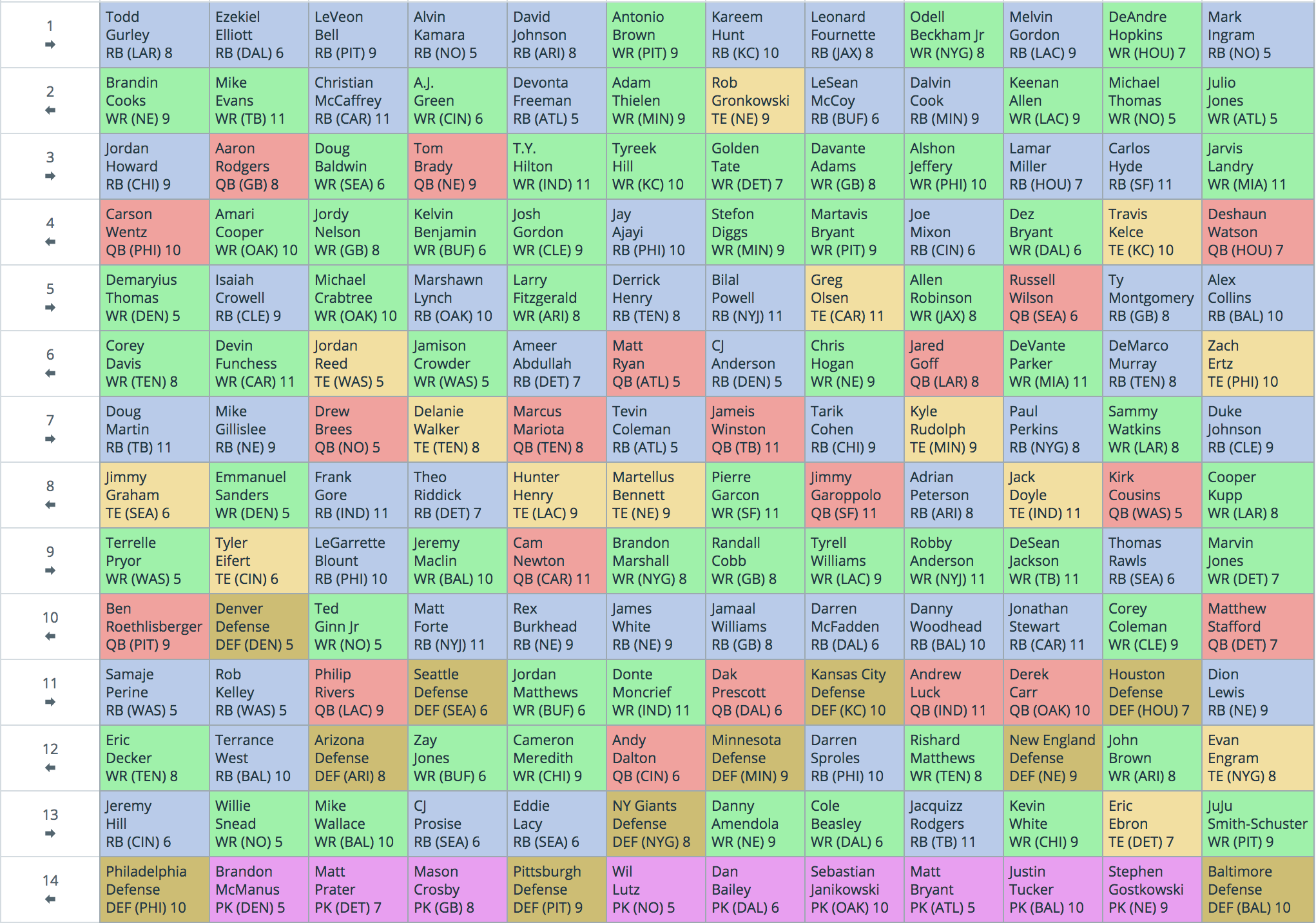 Todd Gurley #1 overall? Sign me up. Overall I think you'll be happy with any of Gurley, Elliott, or Bell so this is a great start to the draft. Hopkins is also great value at 1.11 based on how many targets he will get and the fact that he should have a healthy DeShaun Watson. Kamara at #4 seems a bit high since he will probably regress a bit, and I just don't trust Fournette's injury history to go in the 1st round.

I'd prefer Michael Thomas and Keenan Allen over Julio Jones personally. I think Thielen is a little high at 2.07, but other than that this is a pretty solid PPR round.

Round 3 was pretty WR heavy. T.Y. Hilton is a risky pick and the value really depends on if Andrew Luck is back. If Luck plays in 2018, a 3rd round pick for T.Y. is a steal. If we are unsure about Luck, T.Y. in round 3 is a HUGE risk. Davante Adams seems to be the top WR in Green Bay now, so I really like that pick too. I'm not a fan of Lamar Miller, and believe D'onta Foreman could take that job in Houston, so a Round 3 pick is way too high.

I really hope Deshaun Watson doesn't go this high, especially before Carson Wentz and Russell Wilson (see Round 5). That is way too early for a rookie QB coming off an ACL tear. Jay Ajayi is also too high in this draft. He is in a committee and no one knows who will get the carries. Jordy Nelson is a risky pick here, as well as Kelvin Benjamin. Travis Kelce and Joe Mixon in Round 4 seems fair, especially if the Bengals stick with Mixon as their main back.

There were a lot of unknowns in Round 5. Will Isaiah Crowell be a Brown? Will Larry Fitzgerald retire? Where will Allen Robinson end up? Will Crabtree get cut? Will the Titans stick with the Murray/Henry tandem that annoyed fantasy owners? All that being said, it's too hard to really say if any of these picks are good value. Russell Wilson is a steal in Round 5. Demaryius Thomas seems fair at the 5.01 spot. Ty Montgomery shouldn't go anywhere near this high. He seems unlikely to stay the RB for Green Bay.

Another TE steal in Round 6, Zach Ertz was the #3 TE and was extremely consistent. 6.01 seems like a good deal. I also like CJ Anderson and Jamison Crowder in this round. Corey Davis is a bit too high after a disappointing rookie season, and the Lions may look to draft a RB so Ameer might be out of the job soon. I'd keep an eye on the draft for that.

Oh boy I don't like this round at all. Doug Martin and Mike Gillislee might not even be the starters next year. I mean Gillislee was inactive most of the season. Marcus Mariota and Jameis Winston are too high as well. Both QBs struggled in 2017. Tarik Cohen is irrelevant with Mitch Trubisky, and Paul Perkins probably won't be the starter in New York. The only highlights here are Drew Brees at 7.03 and Duke Johnson at 7.12. Johnson has been great in PPR (and extremely undervalued).

I absolutely love the Jimmy Garoppolo and Pierre Garcon picks in Round 8. I think SF will have a solid offense next year. I don't like Adrian Peterson or Martellus Bennett; neither will be fantasy relevant barring injury to the main starter. Jimmy Graham at 8.12 is interesting, since it is rumored that he won't return to Seattle. Depending on where he goes, this draft spot could be a steal.

Terrelle Pryor and Tyler Eifert are huge question marks. Pryor was just awful in 2017, and Eifert can't stay healthy. I probably will avoid these two altogether unless they fall further. Robby Anderson and Marvin Jones are steals this late in the draft. Robby Anderson was the main WR for the Jets (941 yards) and Marvin Jones had a great 2nd year in Detroit (over 1000 yards receiving). Thomas Rawls might be a bit too high here, depending on the RB situation in Seattle.

The first defense came off the board, and I think it's a bit early, especially for the Denver Defense. They weren't as dominant as they were in the past. Matthew Stafford is a great late round QB pick, and Jamaal Williams in Round 10 would be amazing value for a potential starting RB. Darren McFadden isn't on the Cowboys, and James White was fantasy irrelevant in 2017, so both of these guys shouldn't be drafted.

Both Washington RBs going at the same time is strange, and I believe whoever is named the starter will be drafted quite a few rounds higher. Matthews and Moncrief are iffy here, unless Luck comes back and Moncrief stays in Indy. Philip Rivers is great value in Round 11, and Andrew Luck would be a steal if he actually plays. Dion Lewis at 11.12 is absurd based on how he ended the year. He most likely will go in the first 5 rounds once we get closer to the 2018 season.

The best pick this round goes to Evan Engram. He had one of the best seasons for a rookie TE in recent history, and it sounds like Eli Manning will be back as the QB next year. He could be 2018's Zach Ertz. Rishard Matthews seems to have a hold on the WR1 spot in Tennessee so I like that pick. John Brown is also interesting, but only if Larry Fitzgerald retires. Darren Sproles may never play again, so I wouldn't draft him. Zay Jones, Terrance West, and Eric Decker were all pretty irrelevant, so I'd avoid them as well.

I normally would avoid Jeremy Hill, but with Marvin Lewis returning, Hill could still see the field a lot if he stays in Cincinnati. The rest of the round is pretty lackluster. Lacy is just bad, Jacquizz Rodgers might not have a job, and Kevin White spends more time in the hospital than on the field. The best pick of this round is JuJu Smith-Schuster. He had an amazing rookie season and should have a huge role in Pittsburgh moving forward.

This round is extremely boring. The kickers seem to be in a good draft order so I have nothing more to say here.

The last round is normally used to draft a kicker personally, but it may be a good round to pick a lottery ticket player. Sterling Shepard is a great value here, as is Kenny Golladay. Jay Cutler is probably out as the QB in Miami, and Carson Palmer just retired. Eli Manning is not a bad choice here as a backup QB for your fantasy team. I would look for RB Chris Carson (SEA) in your draft as a sneaky pick.