Leading the league in receiving, Hilton caught 91 balls for 1,448 yards and 6 touchdowns. These numbers were strong enough for Hilton to finish as the WR5 in both PPR and Standard leagues.

This type of production is common for Hilton though. He has finished each of the past 4 seasons over 1,000 yards and between 5 and 7 touchdowns.

The graph below shows his slight rise in fantasy football ADP over the past month. Data is from 12-team standard mock drafts. 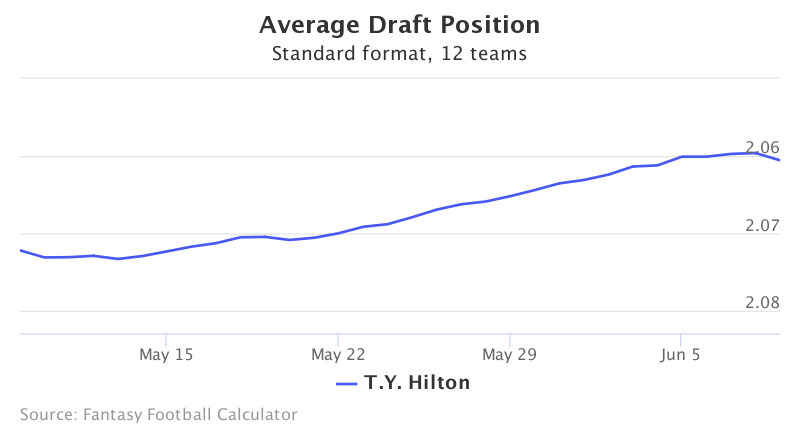 Hilton's ADP has remained consistent over the past month, rising just one position. However, he may present a value on draft day going in the second round.

Hilton plays a valuable role in Andrew Luck's offense. Not only is Hilton the number one receiving option, but he is also the preferred deep target. In 2016 Hilton commanded a 27% overall target market share. However, on deep passes, this number rose to 40%.

This role is extremely valuable in the Colt’s offense. Andrew Luck excelled throwing deep in 2016, recording a passer rating of at least 110 or better in all deep areas of the field. In addition, his adjusted completion percentage was 54.1% on deep passes (4th highest in the league).

This matches Hilton’s skill set perfectly. Hilton had a 51.5% catch rate on deep passes (12th highest in the league) and recorded 528 yards on deep catches. Hilton also led the NFL in catches beyond 20 yards with 17.

Given his production and role in the offense, Hilton is going at a value at 2.06. The resurgence of the running back and the hype surrounding Michael Thomas has caused his ADP to sit in the middle of the second round.

His consistency will allow him to return value in this range, but with hype surrounding other player, his ADP should not rise more than a few spots.