In recent drafts, Akers's current ADP is 4.12, which indicates that his fantasy outlook is in the 12th pick of the 4th round, and 48th selection overall. 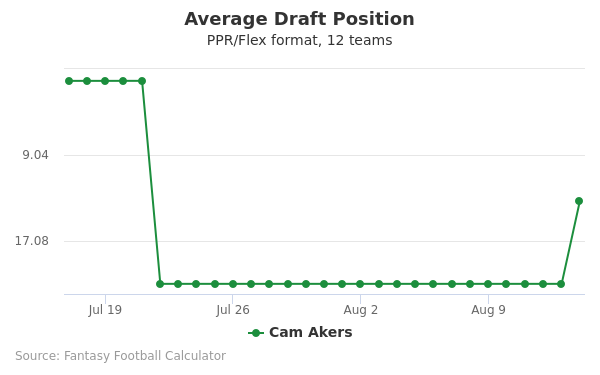 The code below will display a graph that updates every day to show the ADP data for Cam Akers for the past 30 days in 12-team PPR leagues.

Akers is aiming to make "big strides" this offseason after making a quicker than expected recovery from a torn Achilles suffered last July, Greg Beacham of the Associated Press reports.

Analysis: Despite picking up the serious injury just before training camp, Akers was given a chance to return at some point during the 2021 campaign when the Rams opted to place him on the reserve/non-football injury list on Aug. 31 versus injured reserve, the latter of which would have made him ineligible to play. He eventually was activated prior to Week 16 and made his season debut Week 18, and during the Rams' run to a Super Bowl LVI victory he served as the team's primary running back. In those five games, though, Akers averaged just 2.4 yards on his 72 carries, corralled 11 of 13 passes for 86 yards and didn't score a touchdown. During Thursday's media appearance, he relayed, "I wouldn't say I did well. ... I did what I was supposed to do, but obviously that's not enough for me." As he puts the injury further in the rearview mirror, the soon-to-be 23-year-old (in June) will look to fulfill his standing as a 2020 second-round pick, with his primary competition Darrell Henderson, a three-year pro.

Should I start Cam Akers?