In recent drafts, Beasley's current ADP is 9.12, which indicates that his fantasy outlook is in the 12th pick of the 9th round, and 108th selection overall. 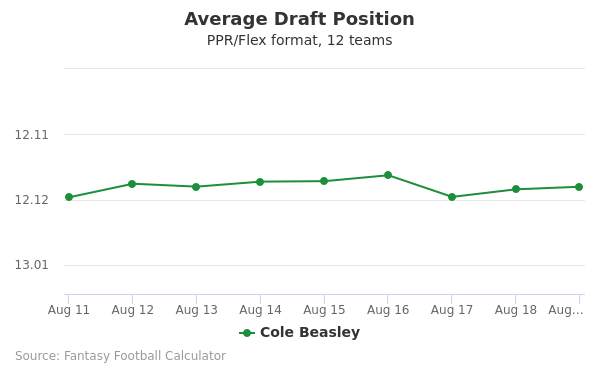 The code below will display a graph that updates every day to show the ADP data for Cole Beasley for the past 30 days in 12-team PPR leagues.

Beasley played through a fractured fibula during the playoffs, Michael Giardi of NFL Network reports.

Analysis: The Bills listed Beasley with a knee injury from Week 17 through the AFC Championship Game, never revealing any details. The slot receiver missed only one game (the regular-season finale) but said the injury bothered him during the first two rounds of the playoffs. Beasley felt better during the AFCCG loss to Kansas City, and he expects to have a normal offseason after catching seven passes in his final appearance of the campaign. The 31-year-old should be safe in Buffalo for the third season of his four-year, $29 million contract, considering he finished 2020 with career highs for catches (82), receiving yards (967), targets (107), yards per catch (11.8) and yards per target (9.0) and catch rate (76.6 percent).

We are down to just 4 teams, and Kansas City may have been dealt a huge blow with the concussion to Patrick Mahomes.  So far he is...
Read more »

Should I start Cole Beasley?