In recent drafts, Robinson's current ADP is 7.05, which indicates that his fantasy outlook is in the 5th pick of the 7th round, and 77th selection overall. 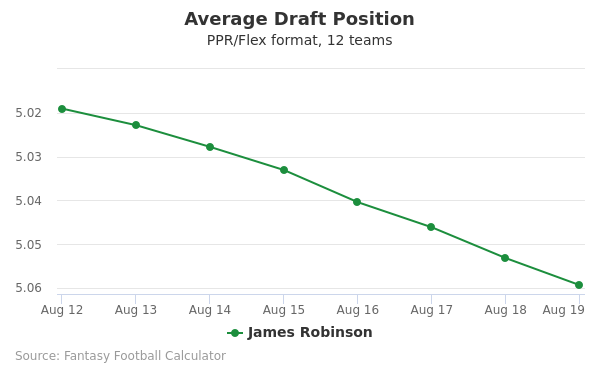 The code below will display a graph that updates every day to show the ADP data for James Robinson for the past 30 days in 12-team PPR leagues.

James Robinson: Out until training camp

Analysis: Meanwhile, Pederson noted that Travis Etienne (knee), the other Jacksonville running back recovering from a long-term injury, is on track to rejoin the team for workouts early during the offseason program. Robinson's recovery from the torn left Achilles' tendon he suffered in late December looks as though it'll extend into training camp in late July, and it's far from a given that he'll be a full participant in practices by then. The track record of players returning from Achilles surgery isn't overly encouraging, and the fact that Robinson suffered his injury late last season and faces strong competition from Etienne -- a 2021 first-round pick -- renders Robinson a risky fantasy investment heading into 2022.

Should I start James Robinson?