Matt Ryan's fantasy value is measured by his average draft position (ADP) in fantasy football mock drafts. In recent drafts, Ryan's current ADP is 10.10, which indicates that his fantasy outlook is in the 10th pick of the 10th round, and 117th selection overall. 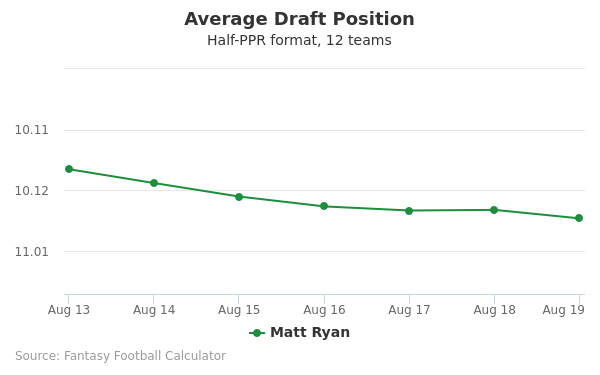 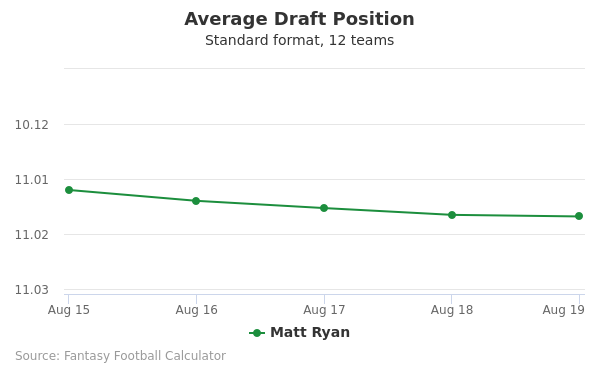 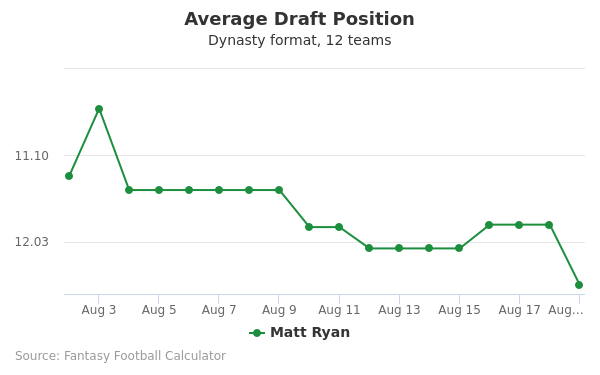 The code below will display a graph that updates every day to show the ADP data for Matt Ryan for the past 30 days in 12-team PPR leagues.

Should I start Matt Ryan?

Should You Start Matt Ryan This Week?

His high school football career began  when he attended the William Penn Charter School in Philadelphia, Pennsylvania. What’s known as the “bible” of college football recruiting, the Larunt Lemming Prep Football Report, lists him as a three-year starter who earned All-East honors.

He attended  Boston College from  2005 to 2007,  and as starting quarterback  he helped his team achieve three bowl victories and a 25–7 record in 32 starts. He threw for 200 or more yards 15 times and is third all time in school history in passing yards (9315) and in pass completions.  In 2005,  he was named MVP at the MPC Computers Bowl.  In 2007 the team got an Atlantic Division championship and Matt Ryan , with 31 touchdown passes,   was declared  ACC Player of the Year.  He won the Johnny Unitas Golden Arm Award for the nation’s top senior quarterback, and  also the Manning Award for the nation’s  top quarterback. To this day, when Boston College is trying to recruit new players, they immediately let them know that Matt Ryan played there.  His #12 Boston College jersey has been retired.

Ryan was drafted by the Atlanta Falcons in the first round of the 2008 NFL draft, as the third overall pick.  His first contract (with a total value of $72 million)   made him one of the four highest paid quarterbacks in the NFL.  He proved his worth.  His first N.F.L. pass was a 62-yard touchdown, and when the Falcons went to the playoffs he was named Rookie of the Year in a landslide vote of broadcasters and sportswriters.

He has been a  Diet Pepsi Rookie of the week and he went from that to being named NFC Rookie of the Month for a winning streak that gave the Falcons a 2-1 record. This was a first in history for the Falcons!

In the 2012 season, after four tries, Matt Ryan got his first playoff victory, over the Seahawks, but the next week the Falcons lost to the 49ers.

For season  2016, the Falcons averaged 33.5 points per game, and led the league in turnovers in the red zone.   Ryan's  achievements include being recognized as the NFL Most Valuable Player by the Pro Football Writers Association.  He is the first Falcons player to win this award.  He was also named offensive player of the year.

Finally, after helping the Falcons get to the postseason four times out of five, they won the NFC Championship Game – 44-21 over Green Bay, taking the team to Superbowl 51.

Ryan is also on the verge of perhaps winning the Associated Press MVP award, because of his 38 touchdowns with seven interceptions, a 69.9 completion percentage,  4944 passing yards and a 117.QB passer rating.

Ryan  is not the only athlete in  his family. His wife Sarah, who he met at Boston college, is a former Maine high school basketball legend.