In recent drafts, Blankenship's current ADP is 13.03, which indicates that his fantasy outlook is in the 3rd pick of the 13th round, and 147th selection overall. 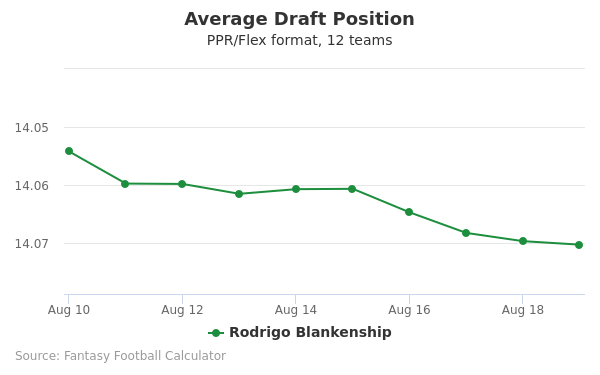 The code below will display a graph that updates every day to show the ADP data for Rodrigo Blankenship for the past 30 days in 12-team PPR leagues.

Indianapolis will have an open competition at placekicker between Blankenship and Eddy Pineiro, the Indianapolis Star reports. " Hot Rod had a good season for us last year, so that's obviously taken into consideration. He'll have to earn it again this year. ... It is open competition," said head coach Frank Reich.

Analysis: Blankenship had a solid year, missing only five kicks (including PATs) inside of 50 yards. However, he had a 33-yard miss late in the third quarter against Buffalo in the playoffs. He doesn't have great range (1-for-3 on kicks of 50-plus yards), so the Colts could decide to go with a stronger leg. Still, Blankenship has to be considered a heavy favorite to retain the job.

Should I start Rodrigo Blankenship?