In recent drafts, Wilson's current ADP is 7.12, which indicates that his fantasy outlook is in the 12th pick of the 7th round, and 83rd selection overall. 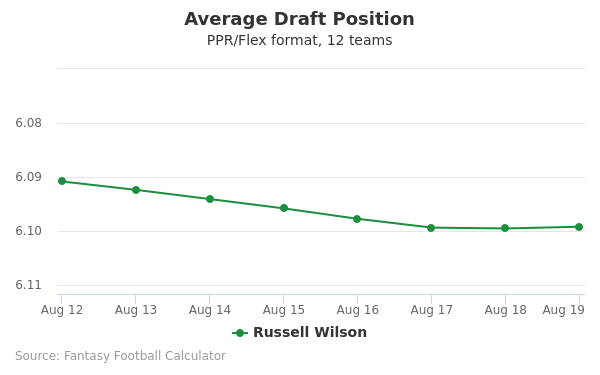 The code below will display a graph that updates every day to show the ADP data for Russell Wilson for the past 30 days in 12-team PPR leagues.

The Broncos' trade for Russell Wilson from the Seahawks became official Wednesday.

Analysis: In one of the landmark transactions of the offseason, Denver finally landed its first big-name quarterback since Peyton Manning retired after winning Super Bowl 50. Wilson will have a bevy of pass catchers at his disposal, moat notably wide receivers Jerry Jeudy, Courtland Sutton and Tim Patrick, tight end Albert Okwuegbunam and running back Javonte Williams. Wilson is coming off a subpar season by his standards, as he missed the first games (three) of his career due to injury and the playoffs for just the second time in 10 pro campaigns. Still, he completed 65 percent of his passes, averaged 7.8 yards per attempt and had 25 touchdowns versus six interceptions in 14 appearances.

Should I start Russell Wilson?

Russell Wilson is currently the quarterback of the Seattle Seahawks and one of the most respected passers in the game. Growing up in Virginia after being born in Ohio, he played football at Collegiate School in Richmond Virginia. Here, he was a very successful high school player, scoring 40 passing touchdowns in his junior year and 15 rushing. In his senior year, he scored 34 touchdowns through the air and 18 on the ground.

Wilson started his college career at North Carolina State in 2008 and played there three years before transferring to Wisconsin in 2011. His freshman year saw him throw for 150 completions for a percentage of 54.5. Of those passes, 17 were touchdowns and only one an interception. His total yardage was 1,955.

After transferring to Wisconsin in 2011, he had 225 receptions on 309 passes for an astonishing 72.8 completion percentage. His yards dipped slightly to 3,175, but his accuracy increased as he scored 33 touchdowns and gave up only four interceptions. View highlights.

Wilson, like the legendary Tom Brady, is one of those great quarterbacks that sneaked through the cracks in the draft. In spite of solid combine numbers, scouts had issues with Wilson's height and rated him fairly low as a result. The Seahawks then picked him in the third round of the 2012 season. Amusingly, he then tied Peyton Manning's record for passing touchdowns by a rookie (26) and led the Seahawks to their first Super Bowl victory of all time in 2014.

So why would so many teams pass on a quarterback with a 40 time of 4.55 seconds and a vertical of 34-inches? It's hard to say, but when he was recently re-signed to a four-year contract, he received an $87.6 million salary. He is currently the second most highly played player in the league.

As mentioned above, Wilson had an almost immediate impact on the fortunes of the Seahawks. In his rookie year of 2012, he went 11-5, had a completion percentatge of 64.1 percent for 252 passes. He picked up 3,118 yards and scored 26 touchdowns on just 10 interceptions. In just his second season, his team went 13-3 and won their first ever Super Bowl. His completion percentage stayed around 64 percent as he made 257 passes. Yardage jumped up to 3,357 as he scored 26 touchdowns with just nine interceptions, the first of three straight years when he gave up just single-digit interceptions.

In 2014, he went 12-4 and picked up 3,475 yards on 285 completions. After scoring 20 touchdowns with just seven interceptions, he went to the Super Bowl again, but lost on an interception on a two-point conversion in the final seconds of the game. Since then, the Seahawks have remained competitive, going 10-6 and 10-5-1 in 2015 and 2016. Wilson has topped 4,000 yards both seasons and improved his already remarkable completion percentage (a career high of nearly 70 percent in 2015). View highlights.

Wilson is a well-known and outspoken Christian who stated he was remaining a virgin until marriage. He was married in 2016 to singer/songwriter Ciara and they are currently expecting their first child. Wilson is also very active in Seattle, devoting much of his time to various charities. His Twitter account showcases a dedicated and serious young man who loves God and is serious about his career.