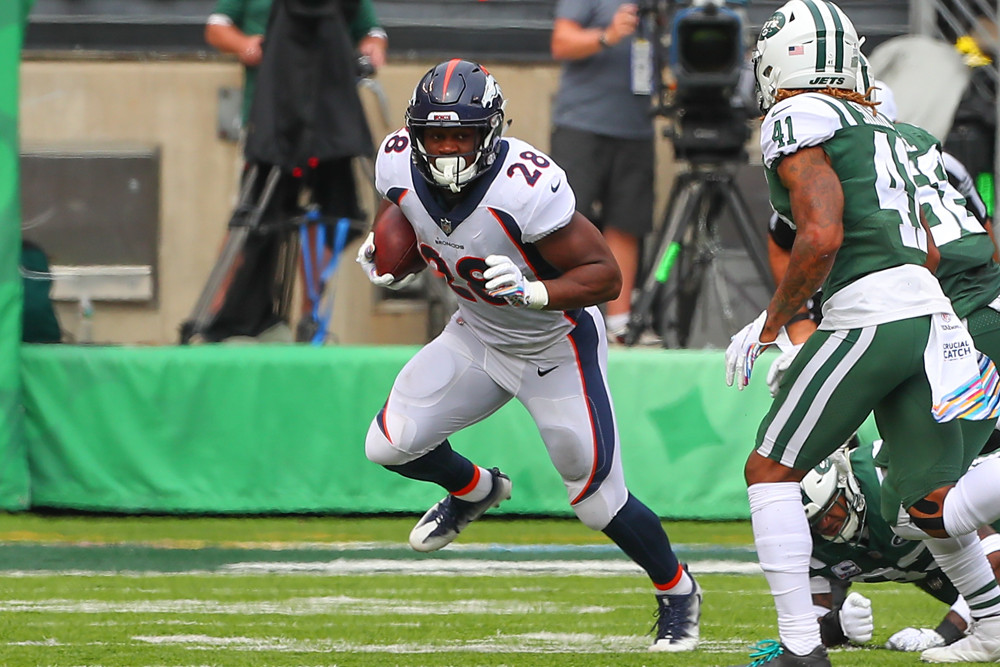 With all of the weapons at his disposal, Eli Manning hasn't lived up to expectations and has looked downright awful during certain games this season. This week, however, Manning has an excellent matchup against the Falcons D that has just been demolished with injuries. Atlanta's defense is currently giving up an average of 25.7 fantasy points to quarterbacks (2nd most in the league) and continues to be a defense to target on a weekly basis when streaming the position.

While he has been stuck in a timeshare for the past few weeks, now is not the time to give up on Royce Freeman. He has a fantastic matchup this week against the Cardinals who are allowing the 2nd-most fantasy points to teams' RBs per week (35.4). While he does share the backfield with Lindsay, there should be enough points to go around for Freeman this week.

If you haven't been starting John Brown up to this point in the season, you've got to start, beginning this week against the Saints, who are giving up the highest amount of fantasy points to opposing WRs this season (51.9). The Saints D cannot stop any offenses and with many starting wide receivers on bye-weeks John Brown is a no-brainer at the position this week and beyond.

With Baker Mayfield at QB, David Njoku has come alive in the Browns offense, averaging 6 receptions and 59 yards over the past three games, and he was able to find the end zone for the first time this season. This week he faces the Buccaneers defense which is allowing the most fantasy points to the position through their 5 games played. Look for Njoku to have another productive week and take advantage of a weak defense.

In to replace Matt Bryant for the time being, Giorgio Tavecchio takes over kicking duties on a top-10 scoring offense. This week the Falcons host the Giants who are allowing the second-most fantasy points to kickers this season. Tavecchio should have more than enough opportunity to provide double-digit points this week for those who may need an upgrade or bye-week replacement.

The Indianapolis Colts defense will be licking their chops entering this week's game against the Buffalo Bills who will be rolling out Derek Anderson who hasn't played a game for them yet this season. The Bills have the lowest team total entering the week and the Colts D should score well in the double-digits this week.

After a bounce-back week against the Falcons, Jameis Winston faces a tougher defense in the Cleveland Browns in Week 7. The Browns have been sneaky-good against the QB this season, allowing an average of only 14.6 fantasy points to the position this season. While there are many QBs on byes this week like Roethlisberger, Rodgers, and Wilson, there are much better streaming options this week such as Mayfield, Flacco, and Trubisky.

Alfred Morris was nothing short of disappointing on Monday night against the Packers and only saw the field on one snap, in which his run got called back for a hold. Morris ended the day with a big fat 0 fantasy points and ruined owners' weeks who trusted him. Matt Breida has a firm grip on the offense's number one running back position and don't rule out rookie Raheem Mostert from completely eliminating Morris' role with the 49ers. With there being zero upside in sight for Morris, he is a definite sit this week against the Rams.

Should everyone be excited moving forward about Tyrell Williams' 3-118-2 performance last week? Much like Robby Anderson last week, we should be pumping the breaks with Williams as well. His season-high in targets is 3, and his season-high in yardage before last week's performance was only 66. He's been unreliable and wide receivers will have outlier games. Unless teammate Mike Williams gets hit with the injury bug which keeps him out for an extended period of time, Tyrell cannot be trusted even with several teams on bye weeks.

Greg Olsen has been an injury concern all season long and has only played in two games this season. In those games, he's averaging 3 catches for 40.5 yards. This week he's up against a tough Eagles defense that is allowing a league-low 8 fantasy points to the position. Like in past articles, players who carry name value (Jordan Reed) simply cannot be trusted every week, especially when facing a defense that excels at covering the position, which is the case this week for Olsen.

The Cowboys square off against the Redskins this week and Brett Maher is coming off a 21 fantasy point performance. The Washington defense is only allowing 4 fantasy points to the position which is the lowest in the league. Whether or not this continues is to be seen, however, there are plenty of other great kickers to stream this week, so there is no need to play a kicker in what will be a tight, divisional matchup.

The Chicago Bears defense, with a bye week under their belt and a negative 1 performance last week against the Dolphins, still remain as the highest-scoring fantasy defense entering Week 7. However, they should be played with caution entering this week against the Patriots, especially with Khalil Mack not 100% - we saw he wasn't the same last week against Miami and showed he is, in fact, mortal after all. The Patriots are gaining momentum and are a week removed from putting up 43 points. The Bears D has the potential to score in the negatives in back-to-back weeks and a better matchup should be exploited.