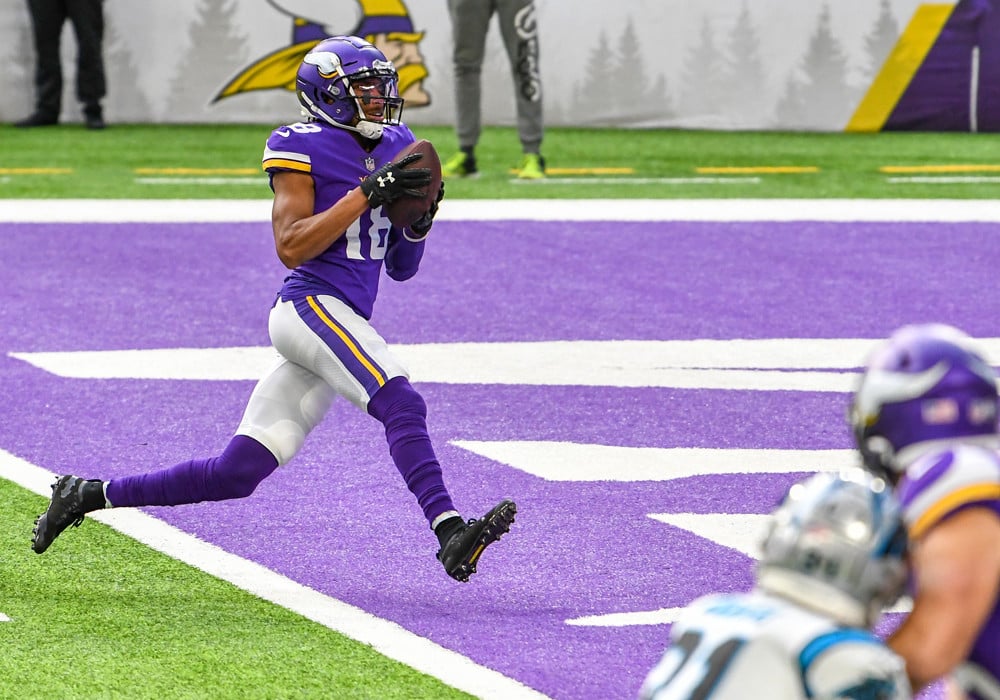 Justin Jefferson had a quiet start to his college career, playing only two games and catching one pass for four yards in his freshman year. However, things quickly changed with a year under his belt and Joe Burrow at the helm, as he caught 54 passes for 875 yards and 6 touchdowns his sophomore year. All of that was an introduction to his true breakout campaign in 2019 with one of the most prolific offenses in college football history. Alongside Burrow, Ja'Marr Chase, Terrace Marshall, and Clyde Edwards-Helaire, Jefferson caught an absurd 111 passes for 1540 yards and 18 touchdowns.

Not surprisingly, Jefferson was highly sought after in the draft albeit in one of the strongest wide receiver drafts in years. Still, questions on his size and route-running (yes, this really was a question) saw Jefferson taken as the 5th wide receiver off the board to the Vikings at the 22nd overall pick.

The fit couldn't have been better for Jefferson. The Vikings needed wide receiver help after sending Stefon Diggs to the Bills and Jefferson landed with an established offense and an (ever so slightly) above average Quarterback. With teams unable to stack the box due to Dalvin Cook, and Adam Thielen pulling coverage, Jefferson had an opportunity to make an immediate impact.

And make an impact he did. I think we all know the story by now, but Jefferson set the world on fire in 2020, dropping the griddy across the country. He caught 88 balls for an even 1,400 yards and 7 touchdowns on the way to setting the rookie receiving record for yards.

However, Jefferson actually got off to a bit of a slow start as the Vikings eased the rookie into playing time as he didn't see over 70% of the offensive snaps in the first two games. That changed after his 175-yard outburst in week 3. From there the Vikings put their trust in the rookie and he rewarded them with the best receiving campaign of a year one player in modern history.

Jefferson did this through elite separation skills, sure hands, and being an absolute menace in the open field. Jefferson constantly got behind the defense and showed fearlessness going over the middle, playing both a deep threat and possession role for the Vikings. He ranked 8th in total yards after the catch among wide receivers as well, leaving a trail of defenders in his wake. Considering he was doing all these things at age 21, the sky certainly seems like the limit.

So where does Justin Jefferson go from here? Setting the all-time rookie receiving record is a pretty tough act to follow, not to mention trying to best a campaign where he was the sixth-best fantasy wide receiver. And does he repeat his huge 28% target share that he saw after week 2 of 2020?

As far as the Vikings are concerned, the skill position players remain basically the same. While they did add Ihmir Smith-Marsette through the draft, he'll likely take development time to break into the offense. Still, you're in pretty good shape with Jefferson, Thielen, Cook, and Irv Smith as your top 4 offensive options. The biggest change came in the form of some big bodies. The Vikings addressed their below-average offensive line with two top 100 picks, taking Christian Darrisaw at 23 and Wyatt Davis at 86. Both players have a good chance to start, and the Vikings might be looking at having an average offensive line for the first time in what seems like forever.

Both the continuity of the skill positions and the improvement of the offensive line bode well for Jefferson. And we generally know who Kirk Cousins is as a quarterback, which is completely fine. I think the biggest question is, how much more can you expect from Jefferson who finished third in receiving yards and sixth in overall fantasy points for wide receivers? And the answer maybe not much, which is totally fine. At his going rate, you're looking to take a sure-fire WR1 and that's exactly what Jefferson is. He's not quite a top-tier guy but I would have supreme confidence taking him in the second round and locking him in as my top fantasy receiver every week. Draft with confidence.