Is Jordan Howard worth a high second round draft pick?

Chicago Bears’ Jordan Howard had a fantastic rookie campaign, amassing 1,313 yards on the ground and rushing for 6 touchdowns – this ranked him second in the league in rushing yards and his 5.2 yards per carry ranked him 4th in the league. This was pretty spectacular considering Howard only started 13 games, and did so behind an often-injured offensive line. He also added 29 receptions for 298 yards and caught 1 touchdown.

Howard was a threat to take it to the house every time he touched the ball -- he finished 3rd in the NFL in carries of 15+ yards with 19, only bested by LeSean McCoy and Ezekiel Elliott (both had 22).

Howard finished as the 9th and 10th running back in standard and PPR leagues, respectfully, and could be in line for just as much work, if not more, in 2017.

Howard is currently being drafted as the 13th player off the board at a current ADP of 2.02. This makes him the 8th running back taken in standard mock drafts and his value has slid over the past month. 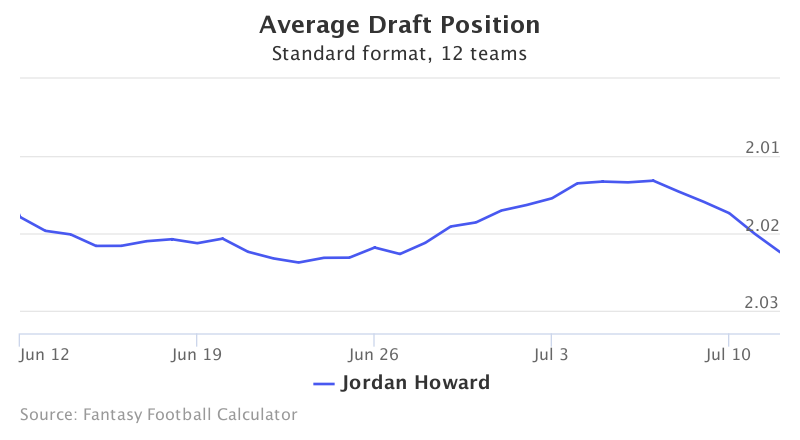 A month ago his ADP was 1.12 – a first round pick in fantasy football. Throughout the month his ADP has gone as low as 2.02, however the difference in ADP may be decided by who was selected in the first round. Without a doubt, Howard will solidify himself by draft time in late August as a top 15 pick in drafts.

Howard’s Value in the Bears’ Offense

Now that wide receiver Alshon Jeffery is out of the picture and with Mike Glennon or rookie quarterback Mitchell Trubisky at the helm, the Bears’ offense may need to rely on Howard more than last year.

Howard proved last year he could handle the heavy workload and will need to continue to be versatile in the backfield. Per Pro Football Focus, no running back gained more yardage between the tackles in 2016 than Jordan Howard and no rookie running back forced more missed tackles on running plays.

Howard will need to keep the pressure off of his rookie QB by running early and often, as well as receiving short dump off passes. This will, in turn, force Howard to face defenses who will stack the box to take away the Bears’ best offensive weapon, thereby forcing the unproven rookie, Trubisky, to beat them. This is certainly a concern for Howard as last year he struggled with just 3.36 yards per carry against eight-plus defenders in the box.

Make sure to check his value in mock drafts to stay up to date with where he is being drafted.