Our take: Richardson returned from major shoulder surgery for the start of training camp and seems to have stayed healthy up to this point. With Richardson and Trey Quinn (thumb) both likely to miss Thursday's preseason game against Cincinnati, there's a nice opportunity for Terry McLaurin, Cam Sims, Kelvin Harmon and/or Darvin Kidsy to get some run with the first-team offense.

Trey Quinn Recovering from thumb issue: Quinn is dealing with a thumb injury but should be healthy by next week, Craig Hoffman of 106.7 The Fan reports.

Our take: It doesn't sound like Quinn will play in Thursday's preseason game against Cincinnati, but he could make it back for the following week versus Atlanta. Absences from exhibition games shouldn't be a major concern, as coach Jay Gruden has been adamant about Quinn's security in the slot role. The bigger question is whether a young receiver like Terry McLaurin or Cam Sims can put pressure on Josh Doctson for a starting job outside.

Fantasy impact: There's presumably some type of injury involved, as Parker doesn't seem to have the necessary status for a veteran rest day during training camp. His absence should open up extra practice reps for undrafted rookie Preston Williams, who caught four passes for 97 yards in Miami's preseason opener against Atlanta. Parker and Kenny Stills were the starting wide receivers in that contest, with the former logging 13 snaps and catching his lone target for a 14-yard gain.

It's possible to track the change in DeVante Parker's fantasy value over time by looking at where he's drafted. According to the latest PPR average draft position data, he's being drafted in at the 14.05 spot.

Watch out to see if Parker's value changes in light of this update. 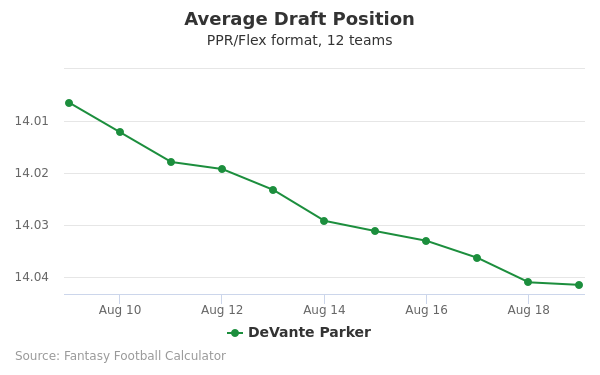 Fantasy impact: Renck also notes that the 32-year-old wide receiver appears poised for a big season, based on his heavy usage with the first-team offense in practice. Sanders confirmed Monday that he's on track for Week 1 and doesn't expect to have a limited snap count at the beginning of the season. His rapid recovery from a torn Achilles and a minor ankle procedure is great news for the Denver offense, though Joe Flacco 's presence under center hints at limited upside for the passing attack as a whole.

It's possible to track the change in Emmanuel Sanders's fantasy value over time by looking at where he's drafted. According to the latest PPR average draft position data, he's being drafted in at the 10.02 spot.

Watch out to see if Sanders's value changes in light of this update.

Amari Cooper May not practice until next week: Cooper (heel) may not rejoin practice until after training camp in Oxnard is completed and the Cowboys return to Dallas next week, Nick Eatman and Rob Phillips of DallasCowboys.com report. "I don't anticipate him [at] practice today," head coach Jason Garrett said Tuesday. "He's handled his rehab well. We're being deliberate with him. We don't want him to take any backward steps."

Fantasy impact: Garrett did indicate Cooper was getting "closer and closer" to returning to action, and if he is able to practice again next week, he would have time to get back up to speed for Week 1. All signs suggest the team is simply being cautious with its top wide receiver, and that the heel issue is not a long-term concern.

It's possible to track the change in Amari Cooper's fantasy value over time by looking at where he's drafted. According to the latest PPR average draft position data, he's being drafted in at the 3.07 spot.

How much this impacts Cooper remains to be seen. 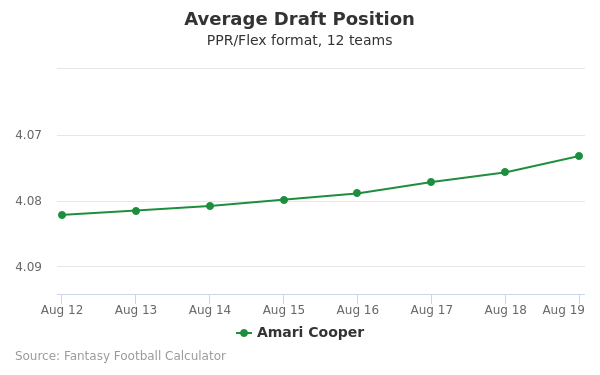