In recent drafts, Burrow's current ADP is 5.02, which indicates that his fantasy outlook is in the 2nd pick of the 5th round, and 50th selection overall. 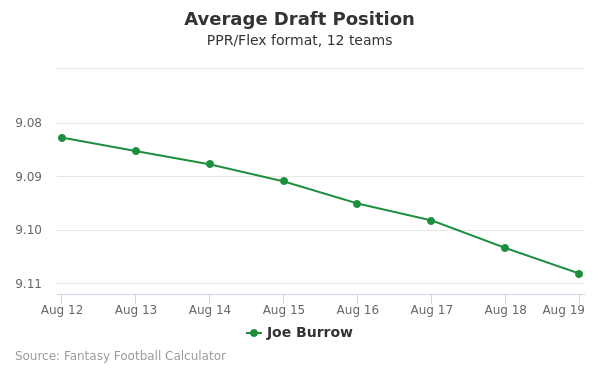 The code below will display a graph that updates every day to show the ADP data for Joe Burrow for the past 30 days in 12-team PPR leagues.

Burrow (knee) is practicing Wednesday without a brace on his left leg, Tribune-ReviewSports reports.

Analysis: Burrow wore a brace on his left knee all last season, after suffering ACL and MCL injuries to that side as a rookie. The 25-year-old also battled an MCL sprain in his right knee down the stretch of 2021's playoff run, which culminated in a narrow Super Bowl loss to the Rams, but he didn't need to undergo offseason surgery. Burrow has been taking part in spring practices, and though the Bengals haven't yet officially announced the quarterback receiving full medical clearance, everything appears to be trending in the right direction. Burrow was the most-sacked quarterback in the NFL last season (51), but he heads into the 2022 campaign with a revamped offensive line. Cincinnati kicks off training camp July 30.

Another football season is coming to a close, and what better way to celebrate the end of the fantasy year by throwing in some picks to...
Read more »

Should I start Joe Burrow?