In recent drafts, Brown's current ADP is 7.03, which indicates that his fantasy outlook is in the 3rd pick of the 7th round, and 74th selection overall. 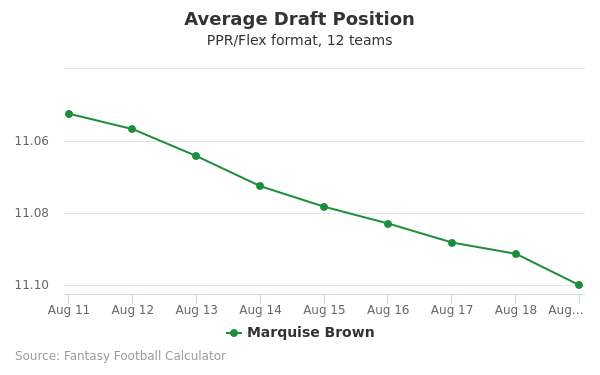 The code below will display a graph that updates every day to show the ADP data for Marquise Brown for the past 30 days in 12-team PPR leagues.

Brown may need to take on a larger role in the Cardinals offense to begin the upcoming season after DeAndre Hopkins was suspended six games Monday for violating the NFL's policy on performance-enhancing substances, Lindsay Jones of The Athletic reports.

Analysis: Arizona made a splash on Day 1 of the 2022 Draft when it acquired Brown and a third-round pick for the team's first-rounder. He was slated to operate with Hopkins and A.J. Green at wide receiver in the base offense, but Brown now should assume No. 1 duties as of Week 1 of the campaign. Brown is coming off the first 1,000-yard season of his pro career in 2021 and previously worked with quarterback Kyler Murray at Oklahoma in 2018, compiling a 75-1,318-10 line in a high-powered scheme. With Hopkins out of the picture for six contests, Brown's primary competition for targets will be Green, Rondale Moore and Antoine Wesley at wide receiver, tight ends Zach Ertz and rookie second-round selection Trey McBride and top running back James Conner.

Should I start Marquise Brown?