In recent drafts, McLaurin's current ADP is 5.02, which indicates that his fantasy outlook is in the 2nd pick of the 5th round, and 50th selection overall. 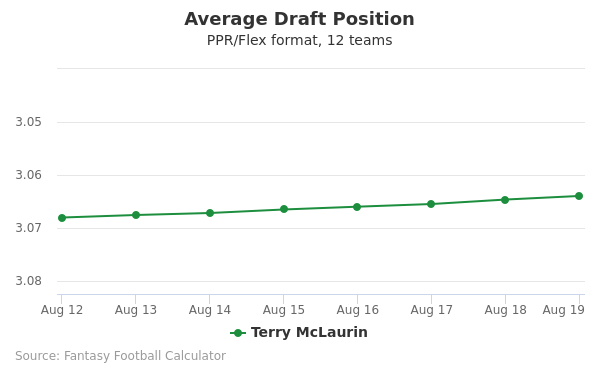 The code below will display a graph that updates every day to show the ADP data for Terry McLaurin for the past 30 days in 12-team PPR leagues.

Washington general manager Martin Mayhew said Monday that the organization is currently in ongoing talks with McLaurin and his agent about a possible contract extension, Nicki Jhabvala of The Washington Post reports.

Analysis: McLaurin is currently with the team, but he isn't participating in any voluntary on-field workouts this offseason. Mandatory minicamp doesn't start until mid-June, so the two sides have some time to figure out a deal, but it's possible the wideout could continue to hold out until an extension is signed. The acquisition of Carson Wentz -- who's owed $28 million in 2022 -- has certainly hindered Washington's moves and likely has been at least part of the reason McLaurin hasn't signed an extension yet. Regardless, Mayhew said, "We're really excited about the opportunity of having Terry continue with us for a long time," so it appears there are no intentions of trading the fourth-year wideout ahead of the draft. Commanders head coach Ron Rivera added that Washington's draft process won't be impacted by McLaurin's ongoing situation.

The 2021 fantasy football season comes down to Week 17! There have been countless amount of injuries and absences this year that have...
Read more »

Should I start Terry McLaurin?