In recent drafts, Kelce's current ADP is 2.01, which indicates that his fantasy outlook is in the 1st pick of the 2nd round, and 13th selection overall. 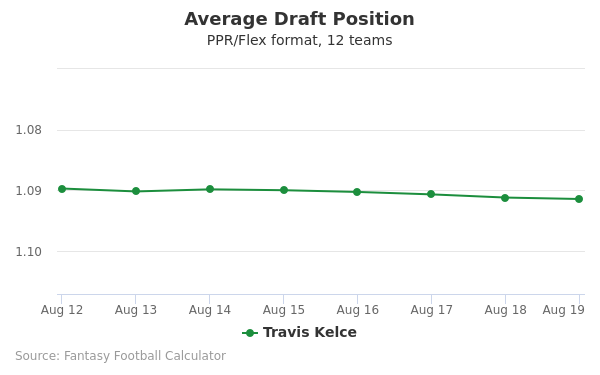 The code below will display a graph that updates every day to show the ADP data for Travis Kelce for the past 30 days in 12-team PPR leagues.

Kelce caught 10 of 11 targets for 95 yards and a touchdown in Sunday's 27-24 overtime loss to the Bengals in the AFC Championship Game.

Analysis: Kelce was Kansas City's leader in targets, catches and receiving yards, producing yet another superb playoff performance -- he racked up at least 95 receiving yards in all six of Kansas City's playoff games over the past two seasons while scoring six touchdowns in those games. The tight end's five-yard touchdown catch in the second quarter gave the Chiefs a 14-3 lead, but the Bengals stormed back from an 11-point halftime deficit to pull the upset. Coming off a sixth consecutive 1,000-yard receiving season, Kelce's poised to remain one of the league's most productive tight ends next season.

Just like Quarterbacks, the Tight End position seems to be an all-or-nothing draft pick year after year.  Either you grab the top three...
Read more »

Should I start Travis Kelce?

Travis Kelce was born October 5th 1989 in Westlake Ohio. Kelce would go on to become an athlete at the Cleveland Heights high school in Ohio. There he would serve as a triple threat playing football, baseball, and basketball respectively. His athleticism especially shined on the football field in which Kelce would have 2,539 yards his senior year of high school. His success on the field set him up to be a phenomenal choice for a college team. Kelce was a letter-winner for a total of three years in which he would complete massive 1,523 passing yards with 10 touchdowns and 21 scores during his senior year. Scouts easily were able to place Travis Kelce onto a college team and begin his serious career as an outstanding football player.

Travis Kelce presented with many offers from rival schools eventually accepted an offer to compete with the University of Cincinnati under a scholarship. In 2008, Kelce would make the tough decision to redshirt, allowing him to focus on his college studies and not get distracted by his football career. Kelce finally would play in the 2009 season in which he would have the fortune of starting in 11 games. Those eleven games saw Travis Kelce obtaining 47 yards worth of rushes and two touchdowns. His college career was also shared with his brother Jason Kelce, who played center on the team.

Travis Kelce's pre-draft 40 time was4.61s. His vertical jump was 35 inches. His previous performance in college as well as his pre-draft stats poised Kelce to become an easy draft pick for the Kansas City Chiefs. Kelce was chosen in the third round as the 63rd overall pick. Andy Reid was familiar with Kelce as he had previously drafted Jason Kelce His experience with the brothers made the choice easy, and Travis Kelce would fall into place in the team as a strong player. Kelce would go on to sine a 5 year salary that would combine his pay at $46,842,000.

In 2015, Travis Kelce would play one of his best seasons allowing him to eventually be selected to compete in the Pro Bowl. Kelce competed in all 16 games of the NFL season with 72 catches and 875 yards. This ultimately established 2015 as one of Travis Kelce's best recorded seasons. Having played with the Chiefs since 2013, 2015 was the year in which Kelce would finally begin to shine and prove his worth as a valued player on the football team. Those who are interested in viewing his rookie highlights can easily do so through this video by clicking here.

In 2016, Kelce would once again be selected to compete in the Pro Bowl as one of the Kansas City Chiefs's start player. This was his second straight year being selected to compete in the prestigious football event. Kelve also signed a contract extension that would result in a $46 million increase. The 2016 season would be fantastic for Kelce as he would be named All-Pro as well as go on to complete over 1,125 yards in rushing, a career high for Kelce Travis Kelce would also be named one of the top 100 players within the league establishing himself as an extremely valued player for the Chiefs.

Travis Kelce is the brother to pro-football player Jason Kelce With football running in the family, it is no surprise that Jason has excelled at the sport. Jason competes as a center for the Philadelphia Eagles. Travis Kelce would also go on to host his own show in which he would date a slew of women similar to the show the Bachelor. In his show, he ended up choosing Maya Benberry Unfortunately after the show, the relationship did not pan out as well as Kelce had hoped, and the couple ended up splitting.

If you want to view Kelce's daily live tweets, you can do so by visiting his twitter handle here @tkelce.

Travis Kelce also has a wide variety of gear that can be purchased in order to cheer him on during games. Fans who are interested in supporting Kelce can purchase his jersey and more by visiting here.