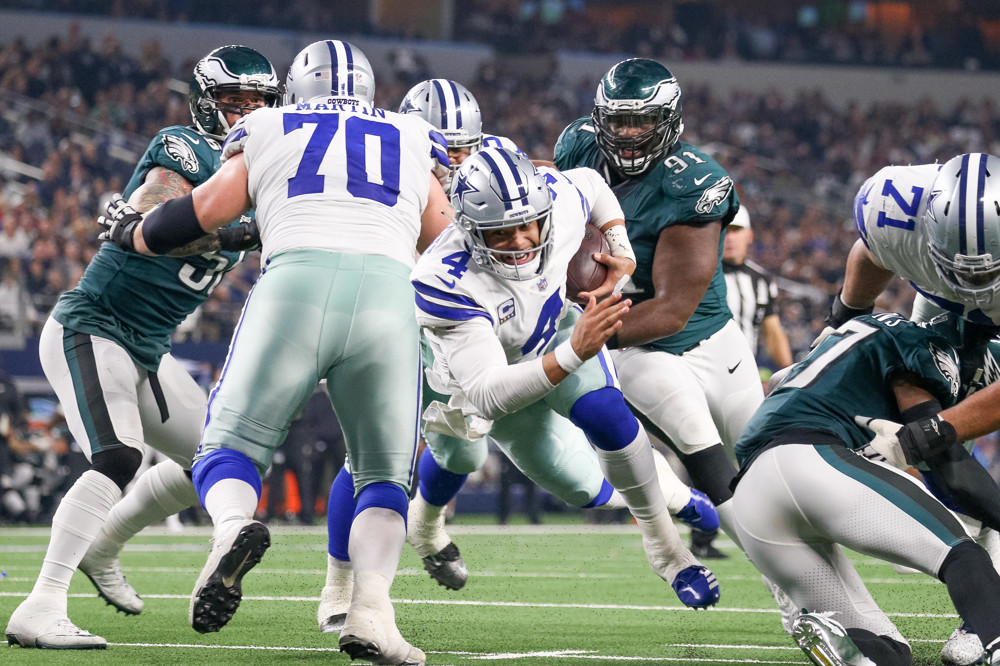 Week 14 brought fantasy playoffs for most, and it brought a lot of craziness across the fantasy scene. Many of the usual studs came up short as teams like the Rams, Chiefs, and Saints struggled to score, while names like Derrick Henry and Amari Cooper carried some shocked owners to victory. Let's go around the league.

Dak Prescott had his biggest passing day as a pro with a monstrous 455 yards and 3 TDs. Tom Brady turned back the clock with 3 TDs and 358 yards of his own. Matt Ryan, Ryan Tannehill, Carson Wentz, and Eli Manning each had 3 TDs too. Patrick Mahomes and Andrew Luck had only 2 TDs but were boosted by almost 400 passing yards. And the shock performance of the day came from Washington backup QB Josh Johnson who threw a TD, ran for another, and added two 2-point conversions to finish as one of the day's top QBs in under one half of play.

There were some big time Week 14 duds, but Jared Goff was an absolute stink bomb. He threw four interceptions and didn't find the end zone. His opponent Mitch Trubisky wasn't much better with 3 picks and only 110 yards, though he did get a TD. Matthew Stafford played turnover-free football but had only 101 yards and no TDs. Cam Newton was also held scoreless, and Drew Brees had a disappointing day considering the tasty matchup.

Derrick Henry was a shock Week 14 stud, running for a whopping 238 yards and 4 TDs on Thursday night. Saquon Barkley and Ezekiel Elliott were yardage monsters again, each of them coming just short of 200 combined yards while Barkley added a TD too. Christian McCaffrey had a pair of TDs and just cleared 100 yards combined.

Todd Gurley had his worst fantasy game of the season, failing to break 30 yards rushing or receiving and being held out of the end zone. Leonard Fournette busted in his return with 14 rushes for just 36 yards. Adrian Peterson was even worse, turning 11 touches into only 19 yards. Josh Adams got the ball only 7 times and had just 36 yards, an Eagles TD-dependent version of LeGarrette Blount who basically matched those numbers. Chargers rookie sleeper Justin Jackson disappointed after his Week 13 breakout, tallying 9 touches for 35 yards.

Amari Cooper continued his Cowboys renaissance with 10 catches for 217 yards and 3 TDs, including the overtime winner. JuJu Smith-Schuster and Julio Jones each had huge 8-catch days for over 100 yards and 2 TDs. Jarvis Landry had 2 TDs and a hundred yards too, though his yards were split between rushing and receiving. T.Y. Hilton had one of the finest days of his career with 9 catches for a massive 199 yards. Kenny Stills had 8 catches for 135 yards and a TD.

Brandin Cooks was one of many Rams to disappoint, with just 3 catches for 22 yards. Antonio Brown's 5 catches for 35 yards wasn't horrible, but it's certainly not what you wanted against the Raiders. Neither was Courtland Sutton's 2 catches for 14 yards in his first game as the lead WR with Emmanuel Sanders hurt. Corey Davis and Kenny Golladay each had only two catches, for 21 and 5 yards respectively.

Week 14 was a huge one for tight ends, but no one was bigger than George Kittle who put up an incredible 210 yards and a TD. The old Rob Gronkowski was back with 8 catches for 107 yards and a TD, though he didn't quite get that tackle for IDP owners. Tampa's Cameron Brate had only 2 catches for scored a TD on both. Jared Cook had another 100 yard game for the Raiders, and Travis Kelce and Eric Ebron both cleared 65 yards and a TD.

Zach Ertz had 5 catches for 38 yards, which is fine for most tight ends but not for him. Trey Burton and Jimmy Graham had 2 catches each, both under 25 yards. Jordan Reed didn't have a catch before leaving injured, and popular streamer Mark Andrews was held catchless too.