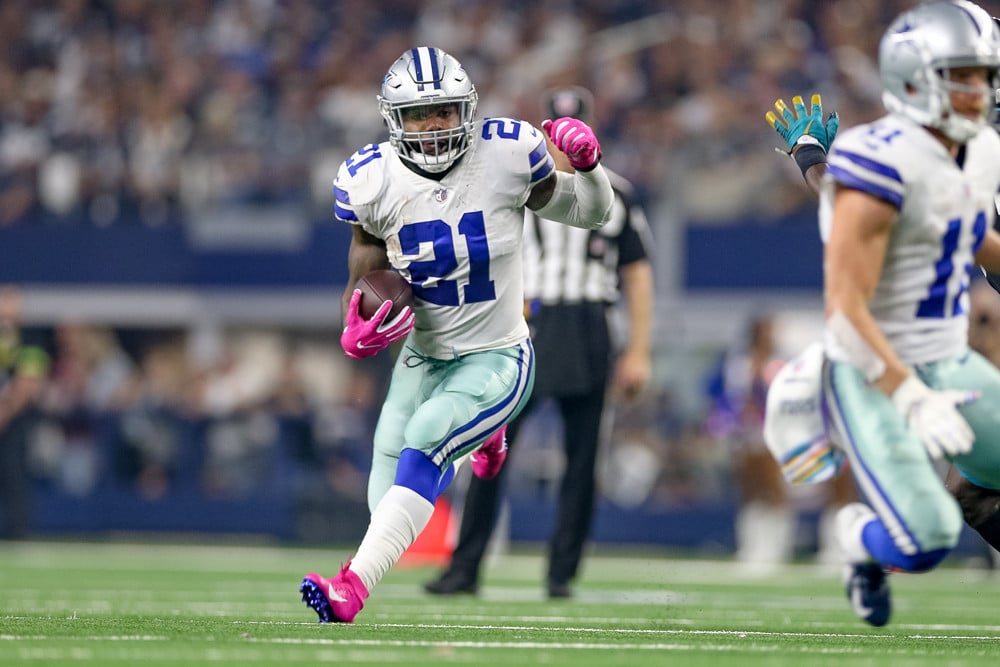 Through six weeks, the NFL's primary bell-cow running backs have dominated the field. Todd Gurley, Saquon Barkley, and Melvin Gordon appear in winning lineups week in and week out. With touches coming at a premium this season, interesting lineup configurations, like Brock Osweiler at QB, have taken down large field tournaments. With that said, here are a few notable players on the Week 7 DraftKings main slate.

Paying down for quarterbacks often provides an avenue to the top running backs. This looks especially true in Week 7 with C.J. Beathard. Beathard has tallied 19.82, 27.66, and 18.90 DraftKings points and thrown at least 245 yards in three games this season. Coinciding with injuries to Aqib Talib and Marcus Peters, the Rams have allowed the eighth-most yards to quarterbacks (1,168) in their last four games. In a potential shootout, C.J. Beathard provides a solid foundation in cash.

Don't get cute. Play Todd Gurley. In the second running back slot, Ezekiel Elliott should be strongly considered. Elliott has handled 89.2 percent of the Cowboys running back touches (2nd-most in the league), along with 30 targets (2nd-most on the team). Washington has played solid run defense of late, but Zeke's volume keeps him in consideration for cash and GPPs this week.

After seeing his snaps jump to 49 percent, Tarik Cohen remains a strong play in a potential shootout against New England. For the fourth consecutive week, Cohen's snaps have increased, while Jordan Howards have fallen. Cohen parlayed his increased role into 17 targets in his last two games. The Patriots have shown vulnerability to receiving backs, allowing the third-most receiving yards (257) over the last four weeks. Cohen can be used as a salary saver in cash and a pivot off Sony Michel in GPPs.

Leading the Rams in targets (49), receptions (34), receiving yards (503), and air yards (570), Robert Woods remains too cheap at 7k. The Rams will be without Cooper Kupp, condensing the target share, while facing a 49ers defense with Ahkello Witherspoon, Jimmie Ward, and K'waun Williams all banged up. Playing in the second-highest scoring offense in the league, Woods should be a cash game target.

Nursing a hamstring injury early in the season, Josh Gordon finally broke out and played 81 percent of New England's snaps and received 9 targets. The Bears have played stout defense to date, but they are fresh off an overtime road trip to Miami, in 100-degree weather. The Bears have also shown cracks in the receiving game, allowing Albert Wilson and DeSean Jackson to rack up 155 and 112 yards respectively. Gordon provides week-winning upside and warrants GPP exposure.

With injuries to Quincy Enunwa and Terrelle Pryor, Jermaine Kearse projects to receive the bulk of the Jets targets in Week 7. Playing in the slot, Kearse draws a winnable matchup against Mackensie Alexander, with Mike Hughes tearing his ACL last week. The Vikings recently allowed slot receiver Cooper Kupp to record 162 yards receiving. At a bargain-bin price of 4.1k, Kearse offers another way to get to Gurley in cash.

Playing a particularly bleak position, David Njoku has taken a big step forward in year two with the Browns. In three Baker Mayfield starts, Njoku leads the Browns in targets (30) and receiving yards (176). In that span only Eric Ebron and Zach Ertz have more targets. To further improve matters, Tampa Bay has allowed the second-most receiving yards to tight ends this season (486). Njoku should hold down the tight end position in cash lineups this week.