In recent drafts, Kupp's current ADP is 1.04, which indicates that his fantasy outlook is in the 4th pick of the 1st round, and 3rd selection overall. 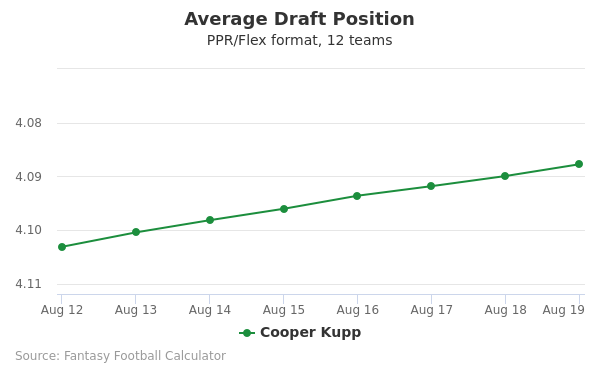 The code below will display a graph that updates every day to show the ADP data for Cooper Kupp for the past 30 days in 12-team PPR leagues.

Kupp agreed to a three-year, $80 million extension with the Rams on Wednesday, Tom Pelissero of NFL Network reports.

Analysis: The 28-year-old was already under contract for the next two seasons for more than $29 million, and he's now set to receive nearly $110 million from the Rams over the next five years. Kupp was the most productive wide receiver in the NFL in 2021 after catching 145 of 191 targets for 1,947 yards and 16 touchdowns in 17 games, and he's now paid like one of the top receivers in the league.

Today we will jump in and review a recent draft I completed from the 9th position. Compare this to how my draft went when I was drafting...
Read more »

Half-PPR leagues are obviously smack in the middle of Standard and PPR leagues, but good Wide Receivers and pass-catching Running Backs...
Read more »

I spent some time mock drafting in a 12-team Non-PPR (Standard) league and I had the 6th spot. Here is a look at the finished draft. You...
Read more »

Should I start Cooper Kupp?