5 Tight Ends to Target for Week 8 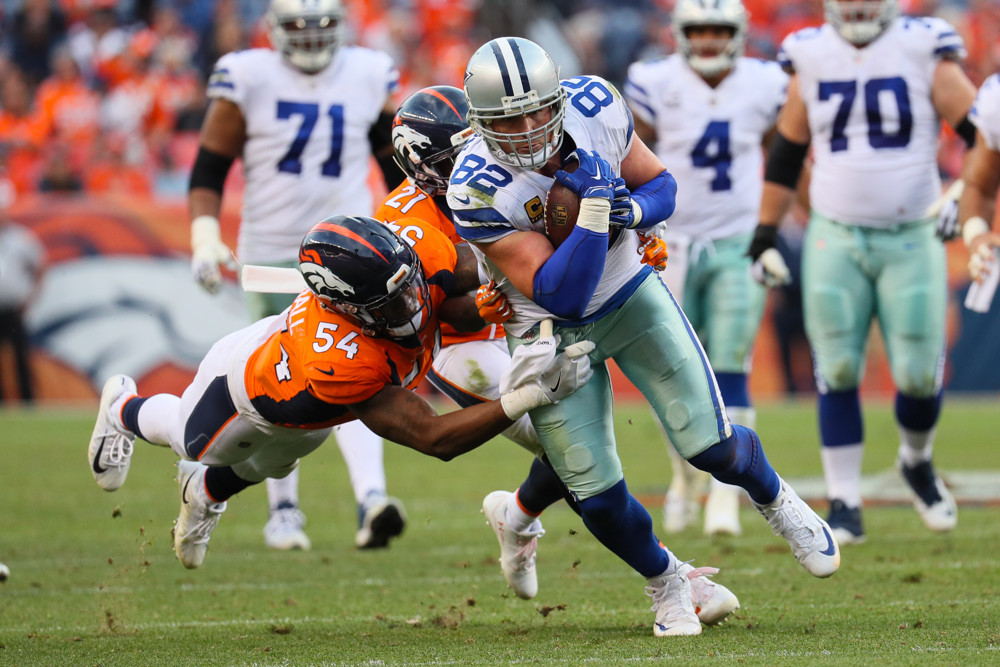 There should be plenty of options this week for Tight Ends, with Evan Engram and Martellus Bennett being the only fantasy relevant TEs on Bye. The TE position has actually been pretty easy to plug and play, unlike last year where a good TE was a dime a dozen. Here is a look at some tight ends that should be able to exploit good matchups in Week 8.

Jason Witten had another solid day in Week 7, catching 4 of 4 targets for 54 yards and 1 touchdown in a blowout of San Francisco. Witten and the Cowboys travel to Washington in Week 8 to take on the 30th ranked defense in points allowed to TEs. Washington has allowed at least 100 yards receiving to the TE 4 out of 7 games, so Witten is primed for a decent game. If Josh Norman comes back next week, QB Dak Prescott will have to look away from Dez Bryant as well.

Kyle Rudolph has had a solid 3 weeks in a row, getting at least 7 targets in every game. In Week 7 against Baltimore, Rudolph caught 5 passes for 43 yards. This may not look promising, but Minnesota takes on a Cleveland Browns' defense that is currently ranked 31st in points allowed to TEs. The Browns have actually had a very solid run defense, so Minnesota may have to throw a little more often to get the ball moving. Rudolph should have a solid day in PPR.

QB Andy Dalton has been known to target his TE, especially in the redzone. An injury to Tyler Eifert has allowed Tyler Kroft to be the go to guy for Dalton. In Week 7, Kroft caught 4 passes on 4 targets for 23 yards and 1 touchdown. The Bengals take on the Colts in Week 8, who currently rank 21st overall in points allowed to TEs. The Colts have allowed 1 receiving touchdown to the TE in 4 of the last 5 games, so Kroft has a solid chance to score in this one.

Cameron Brate's touchdown streak ended in Week 7 after 4 straight weeks with 1 touchdown. He still had 9 targets, catching 6 of them for 60 yards. He may have been outshined by OJ Howard, but Brate was still a favorite of Jameis Winston. The Buccaneers get Carolina at home in Week 8, who currently rank 7th in points allowed to TEs. It may be a little easier for Brate if Luke Kuechly misses another week. Either way, Brate will see his fair share of targets, and hopes to get back on the touchdown streak.

Hunter Henry has been a solid option, getting double digit fantasy points in PPR in each of his last 3 weeks. In Week 7 against Denver, Henry caught 4 of 5 targets for 73 yards. Henry will take on New England in Foxborough in Week 8. NE is currently ranked 25th in points allowed to TEs, moving up from dead last after stuffing Austin Hooper last week (don't look too much into it yet, Atlanta as a whole was a mess). New England has allowed a receiving touchdown to a TE in 5 out of 7 weeks, so there is a good chance Henry gets one in this matchup.