Kyle Rudolph's fantasy value is measured by his average draft position (ADP) in fantasy football mock drafts. In recent drafts, Rudolph's current ADP is 14.02, which indicates that his fantasy outlook is in the 2nd pick of the 14th round, and 157th selection overall. 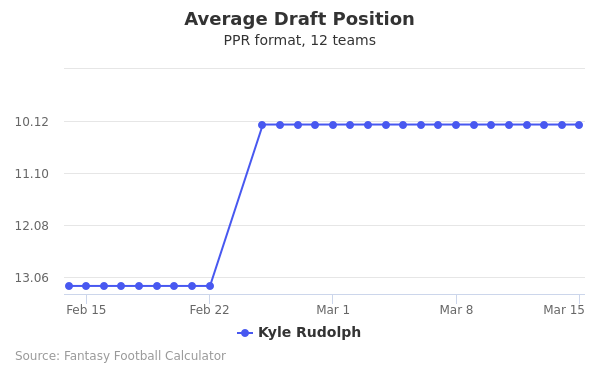 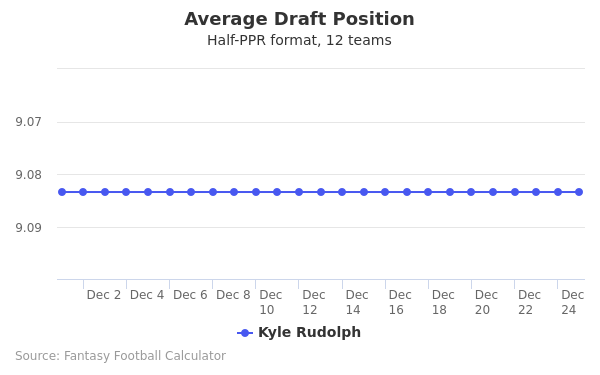 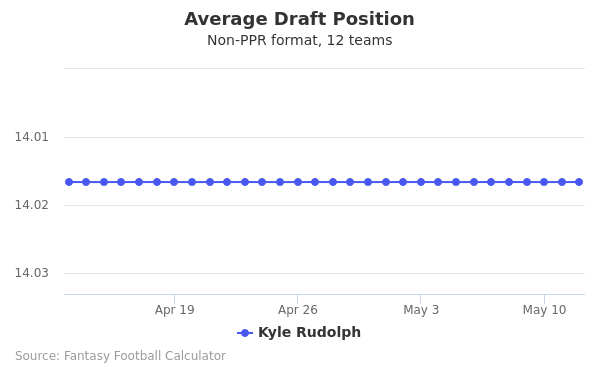 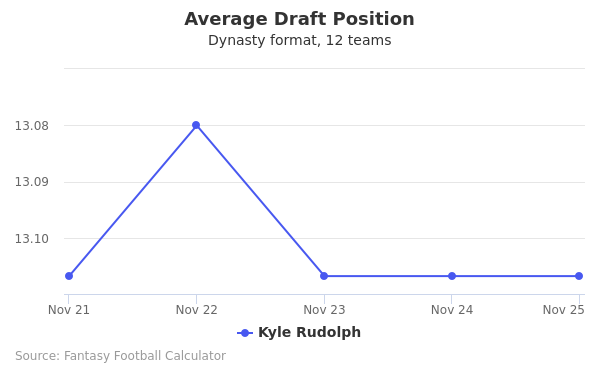 The code below will display a graph that updates every day to show the ADP data for Kyle Rudolph for the past 30 days in 12-team PPR leagues.

Should I start Kyle Rudolph?

Should You Start Kyle Rudolph This Week?

Kyle Rudolph was born on 11/9/1989 in Cincinnati, Ohio. He attended Elder High School in his hometown. At 6'6" and 229 Rudolph was an imposing figure in high school. He grabbed the attention of many of the top scouts and was rated as the the 105th player nationwide on the ESPN top 150 list. In his Senior year, he was selected to play in the US Army All-American Bowl in San Antonio.

Kyle Rudolph sat out most of the 2010 season due to a hamstring injury. As a result, he wasn't able to participate in the combine and doesn't have an official 40 time or vertical. Rudolph was selected by the Minnesota Vikings in the 2nd round of the 2011 NFL Draft. He was the 43rd pick overall.

In his rookie season with the Vikings, Rudolph played in 15 games, but started only 8. He had 249 yards and 3 touchdowns. While he didn't make the Pro Bowl, he was a valuable part of the Vikings' offense. His rookie contract was for 4 years and a salary of $3.9 million.

In 2013, Rudolph fractured a bone in his foot and wasn't able to play most of the season. Despite this, he still had 30 catches, 313 yards, and 3 touchdowns. In 2013, Rudolph was selected for the Pro Bowl for the first time. He took advantage of the opportunity and was named the 2013 Pro Bowl MVP.

Rudolph returned to health in 2015. He participated in 16 games and hauled in 49 receptions for 495 yards and 5 touchdowns.

The most recent NFL season was another success story for Rudolph. He played in all 16 games, and while his team failed to make the playoffs, he almost doubled his catches with 83. He went for 840 yards and 7 touchdowns. Rudolph was one of quarterback Sam Bradford's key targets and was regarded as one of the top tight ends in the NFL and on fantasy football teams.

While Kyle Rudolph may not be the most outgoing person in the world, he's a leader on and off the field. His twitter account is @kylerudolph82. He can be found on instragram at kylerudolph82. Rudolph is married and has twin girls.