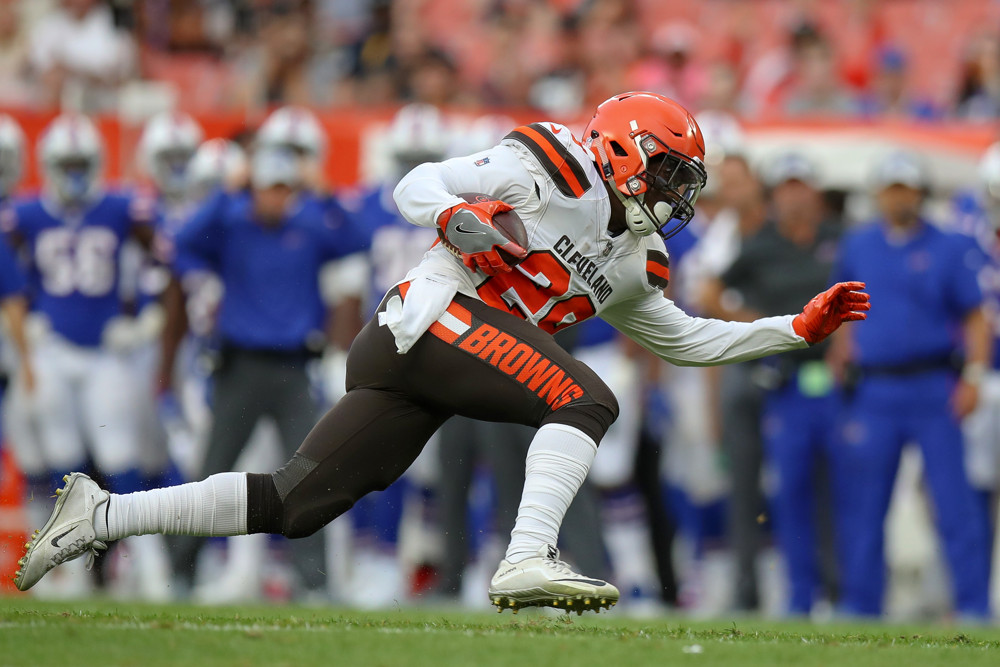 Death, taxes, and FanDuel undervaluing Alex Smith and Tyrod Taylor. Honestly, I think the general public is so uninspired by these quarterbacks that FanDuel can't drop the price enough to get people to buy them. Regardless, both make solid plays while saving you at least $1,500 on the premium quarterback choices. Alex Smith was solid in his debut with Washington, a team that has a sneaky amount of offensive weapons. Not to mention the Colts are not a good defensive club. As for Tyrod Taylor, he was less than inspiring, but his running ability puts an appealing floor on his fantasy points and the Saints were a tire fire last week against the Bucs. Take the cheap points and comparative value.

Oh man, I'm about to suggest Browns back to back. Brace yourselves. Anyway, the simple yardage numbers for Duke Johnson Jr were not pretty in Week 1, but if we go a little deeper, things are looking up. He was on the field for 41 offensive snaps, (only 7 fewer than Carlos Hyde) and saw 6 targets on top of his 5 rushes, meaning he was still actively involved in the game plan. Look for Johnson to capitalize more on those targets this week and supply an above value bump for the somewhat competent Cleveland offense.

The biggest mistake that FanDuel players make is overreacting to Week 1 performances and try to get cute with their picks. Clearly FanDuel doesn't believe in Phillip Lindsey. But unlike a number of other flash in the pan candidates, Lindsey looks like he is here to stay. It's tough to guess how touches will trend moving forward in Denver, but Lindsay appears to be relatively secure in the pass catching role, meaning he will be on the field enough to make an impact. For the paltry price of $4,900 against a less than stellar Oakland defense, those touches should be enough.

The Lions are dead to me, but the only player with a pulse in Detroit last week was Kenny Golladay. Technically the third receiver, Golladay out targeted Marvin Jones and played 65 offensive snaps. All three receivers will get looks but Golladay likely will still draw weaker coverage assignments (for now.) And considering how bad the defense is, the Lions are going to be throwing so much that all the receivers will be involved.

It was a nice game for Quincy Enunwa, who returned from a potentially career ending neck injury to be an important cog in the epic beatdown of a franchise who will no longer be named in this blog. But there is room for improvement here. Many view Robby Anderson as the top wide receiver on the Jets, but it is Enunwa who clearly has a chemistry connection with Sam Darnold. In a closer game, there will be more emphasis on the pass. Expect another valuable performance by Enunwa against the Dolphins.

I KNOW I'm going to regret this suggestion. Just by the fact that I'm putting this on the internet guarantees an 0fer night for Jared Cook. But the passes have to go somewhere in Oakland, and outside of Amari Cooper, they have to get creative. Don't expect nearly the performance he had against the Rams, but for this price, it's tough to do better than Cook.