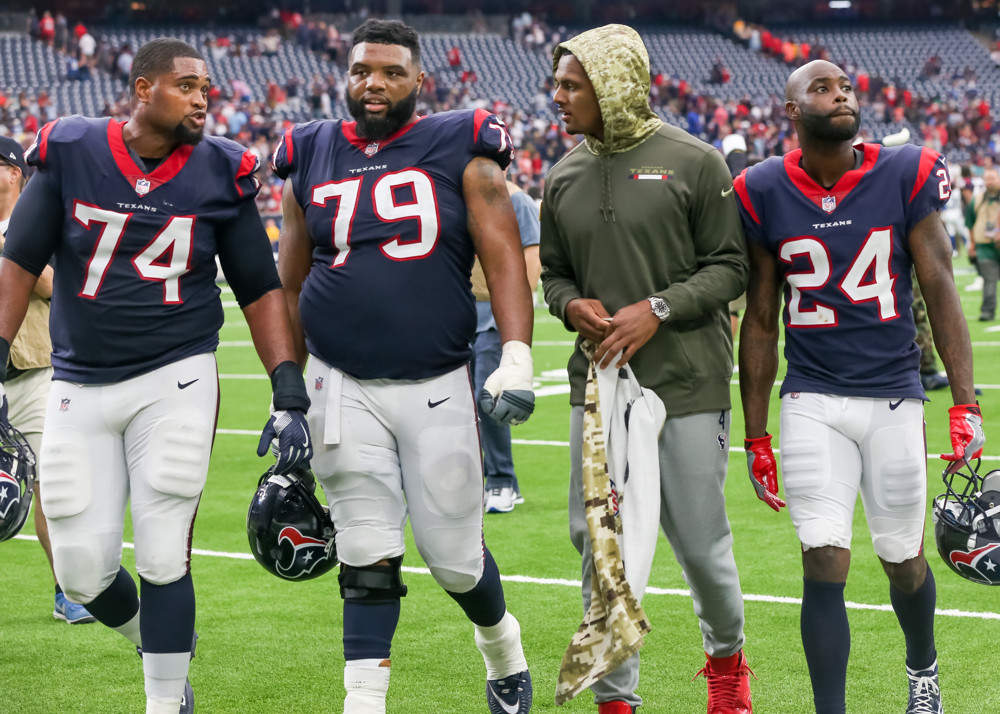 Week 9 started out on the wrong foot with a slew of injuries before game action even took place. The Colts finally placed Andrew Luck on injured reserve, Deshaun Watson tore his ACL in practice, and Pierre Garcon suffered a neck injury, ending his season. If that wasn't enough, this weekend's games only added to the early week carnage. This week's Injury Update will analyze the fallout from each of these situations and what you can expect going forward.

Promising young rookie Deshaun Watson tore his right ACL in Thursday's practice, ending his season. Perhaps the most devastating injury of year, the Texans season is all but over. Watson will rehab and push to be ready for the start of 2018. Barring a setback, he should be ready for game action immediately next season.

Jordan Reed missed Week 9 with a hamstring injury suffered in Week 8. The Redskins ruled out Reed early on Friday, suggesting he was not close to game action. Practice time will be critical for Reed this week, but he appears on the wrong side of questionable. Look for another week of Vernon Davis at tight end for the Redskins.

Pierre Garcon originally injured his neck in Week 8's loss to the Eagles. Early in the week he was listed as a non-participant in practice. However, GM John Lynch announced on Thursday that Garcon would be placed on injured reserve. He also noted that Garcon would not be a candidate for return, ending his season. For now, Garcon's future looks murky, with neck injuries ranging widely in severity and recovery times.

Dez Bryant came up lame on a route late in Sunday's game against the Chiefs with an ankle and knee injury. Although he was unable to return to the game, Ian Rapoport reported that Bryant's injuries are not believed to be serious. Bryant said after the game that his ankle was merely bruised and sore. Coach Jason Garrett also commented that the knee is not too troublesome. Bryant looks to have avoided something serious and should play in Week 10, barring a setback.

Jameis Winston initially suffered a sprain to his A/C joint in week 6, but has consistently played through the ailment. However, coach Dirk Koetter pulled Winston from the game for the second consecutive week. On Monday, Koetter revealed that the Buccaneers will be shutting Winston down for at least two weeks, after an MRI showed additional structural damage. With the Buccaneers season all but lost, there is no guarantee that Winston plays again this season.

Eddie Lacy injured his groin early in the first half of Sunday's game and was unable to return. The injury occurred just after Coach Pete Carroll committed to Lacy as the team's lead back. The Seahawks listed Lacy as a non-participant on Monday, making his chances of returning for Thursday Night's game bleak. Lacy should be considered doubtful for the time being.

The Browns designated Corey Coleman as one of their players to return from injured reserve on Monday. Coleman broke his hand in Week 2, but began practicing for the first time on Monday. Coleman will be eligible to play immediately in Week 11. Barring some sort of setback, Coleman should be active for that contest and slot in as the Brown's number one receiver. He is a speculative add in all forms of fantasy.

Jamison Crowder popped up with a hamstring injury following Week 8's breakout game. Crowder was unable to practice all of last week and ended up missing Sunday's contest against the Seahawks. The decision to hold Crowder out did not come till the Redskins put him through a Saturday workout, suggesting he was at least close to returning to action. For now, Crowder needs to be considered questionable, until he can retake the practice field.

Per ESPN's Chris Mortensen, Teddy Bridgewater will be activated to the Viking's 53-man roster sometime with week. He also reported that the Vikings are considering placing Sam Bradford on injured reserve in a corresponding roster move. Bradford will reportedly see Dr. James Andrews this week and discuss potential surgery. The Vikings have named Case Keenum the starter for this week, but it's possible that Bridgewater makes starts in the near future.

Chris Hogan missed the Patriots first practice following their bye with a shoulder injury. Hogan originally sustained the injury at the end of Week 8. The original belief was that Hogan would miss a few weeks. With no real update, Hogan is highly questionable for Week 10 and it could come down to a game time decision. A return to limited practice will also be crucial to Hogan's availability this week.