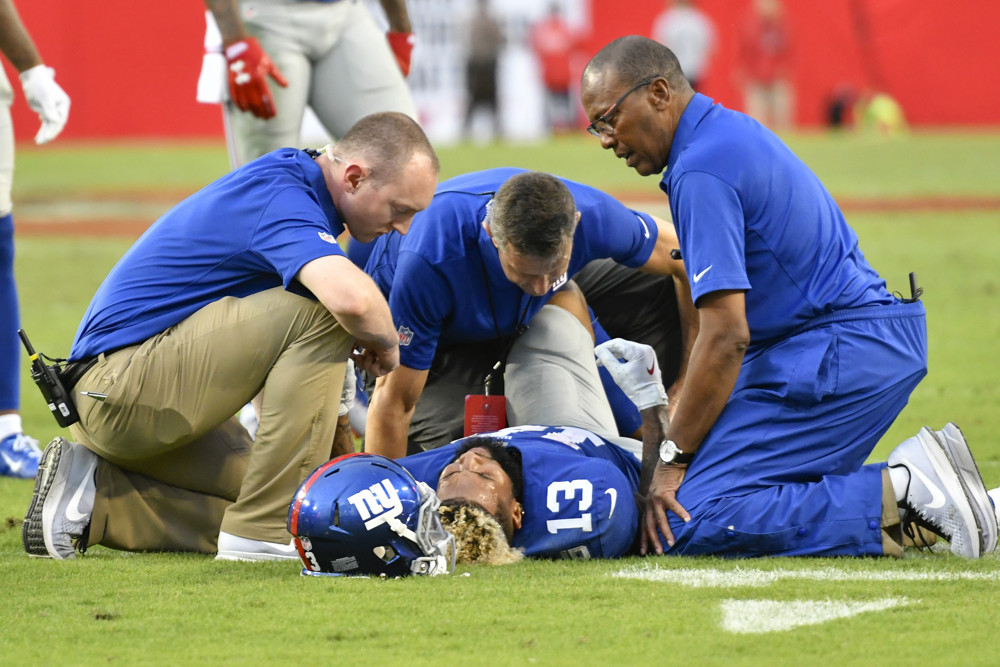 Week 5 marked the beginning of bye weeks in the NFL season and they could not have come at a more opportune time. Multiple players will be looking to the upcoming byes to heal from injuries sustained throughout the season. In what has been a year with numerous devastating injures, week 5 proved to be no different.

After an 0-5 start to the season, the Giants will now be without star receiver Odell Beckham Jr. After suffering a broken ankle on Sunday, Beckham will end the year playing in only four games. Beckham underwent surgery to repair the ankle on Tuesday and while coach Ben McAdoo did not offer a timeline, Beckham is expected to be fully healthy for the start of next year.

In addition to Beckham, the Giants also lost Brandon Marshall for the season with an ankle injury. Marshall announced on his Twitter account that he will undergo surgery to repair his injured ankle. The extent of the damage is unknown at the moment. Next season Marshall will be 34, if he decides to return to the field.

A disaster overall for the Giants, second year receiver Sterling Shepard also suffered an ankle injury in Sunday’s loss. The Giants labeled Shepard day-to-day, indicating his injury is not as severe as his teammates. However, Shepard was spotted in a walking boot on Tuesday. At the moment, there a good chance the Giants will be without their top three receivers against Denver this week.

Charles Clay suffered a knee injury early in Sunday’s game and had to be carted off the field. On Monday Bill’s coach Sean McDermott announced that Clay will miss multiple weeks after undergoing arthroscopic knee surgery. It is believed that Clay is dealing with a torn meniscus and a sprained MCL. It appears Clay had his meniscus trimmed and not repaired, based on the timeline McDermott gave. Expect Clay to be sidelined for at least a month.

Playing only three snaps, Parker suffered an ankle injury early in Sunday’s game. Ian Rapoport of NFL Network reported that Parker’s injury is minor and that he may be able to play this weekend. Practice time will be important for Parker this week, but for now consider him questionable for week 6.

Coming as a surprise, Derek Carr was listed as questionable for week 5. Although he did not play, this suggests that Carr is progressing quickly through his back injury. Originally given a 2-6 week timetable, it appears he has a legitimate shot to play this weekend. Barring a setback, it looks like Carr will be on the low end of that recovery time.

After suffering a hamstring injury in week 4, Marcus Mariota missed Sunday’s contest against the Dolphins. Although he practiced on a limited basis last week, Mariota did not appear close to suiting up for week 5. According to coach Mike Mularkey, Mariota could be a game time decision this week. With the Titans playing on Monday night, this is a situation to avoid for fantasy. For now consider Mariota on the wrong side of questionable for this week’s game until he shows more work in practice.

Suffering a head injury in the first half, Travis Kelce was initially allowed to return to Sunday’s game before being pulled at half time. Now in concussion protocol, Kelce will battle to be ready for this week’s game. Consider him day-to-day, with a good shot to play this week.

Jordy Nelson appeared to aggravate an existing hamstring injury in Sunday’s game after he did not appear on the Packer’s game-winning drive. Following the game, coach Mike McCarthy conceded that Nelson had an injury, but he would not elaborate on what the injury could be. Nelson said, “I’m good” after the game, tentatively suggesting he will be ready for week 6. Practice time will be a good sign for Nelson’s availability this weekend, but he must be considered questionable for the time being.

After struggling to finish the Lions’ contest on Sunday, the Lions announced that Matthew Stafford dealt with ankle and thigh injuries during the game. They also noted that they are optimistic that Stafford will be ready for week 6. After gutting out the injury, Stafford is likely to suit up this week, barring a setback.