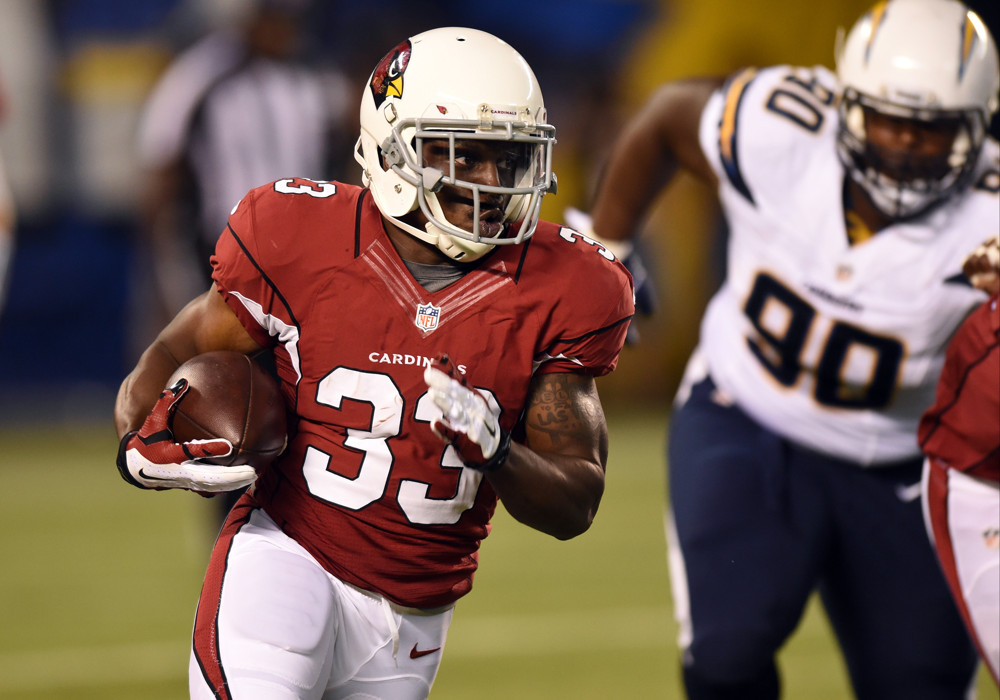 If you are making waiver wire pickups at this point, you must have had a pretty good Week 15. Hopefully you were not the Antonio Brown owner. Besides Brown, it seems most fantasy teams were saved from any serious injury this week. Your team is probably set, so this article will focus more on some streaming options for those desperate to claim a championship title.

Kerwynn Williams continued his workhorse role in Arizona Week 15, rushing 17 times for 61 yards. This makes 3 straight games with 16 or more carries. Williams might not win you a week with a huge day, but he is a solid play with a decent floor that can be used as a safe option if needed. Williams gets the Giants in Arizona in Week 16, so he should have an opportunity for a better game.

Martavis Bryant was a bit of a disappointment this season, never living up to the hype while newcomer Juju Smith-Schuster took the lime light. Now Bryant has his chance to shine thanks to a calf tear to Antonio Brown. Bryant caught 4 of 6 targets for 59 yards and 1 touchdown in Week 15 against the Patriots. Bryant gets a great matchup in Week 16 against the Texans, so he should be added in all leagues if you need a WR.

Eagles' fans can breathe easy now that they've seen that Nick Foles can lead this offense efficiently. Foles completed 24 of 38 passes for 237 yards and 4 touchdowns. The numbers might not look amazing (besides the TD's) but Foles made safe throws and didn't turn the ball over. He has had a history of being a solid backup QB in the NFL, so he can be trusted as a streamer if need be in fantasy leagues. He also has plenty of weapons there in Jeffery, Agholor, and Ertz, so Foles should have no problem in Week 16 at home against the Oakland Raiders.

Blake Bortles continued his late season hot streak by destroying the Houston Texans 45-7 in Week 15. He completed 21 of 29 passes for 326 yards and 3 touchdowns. He didn't even have to finish the game. The Jaguars travel to San Francisco in Week 16 to take on the 31st ranked defense in points allowed to QBs. The 49ers have actually had a solid run defense the past few weeks, so Fournette could have a tougher time than most would think. If that is the case, Bortles will have to throw a little more often. He is a solid streaming option for the championship weekwho would have guessed?

Detroit Defense has gotten back to its' winning ways the past two weeks, and takes on a struggling Cincinnati Bengals team that has benched Andy Dalton twice in consecutive weeks. That's pretty promising for the Detroit defense; either they get a struggling Andy Dalton or a backup AJ McCarron. If Cincinnati struggles again, you could be in for a nice day with this defense.

Another solid streaming option, Washington takes on the Denver Broncos in Week 16, in Washington. Josh Norman should take on Demaryius Thomas, and Emmanuel Sanders departed Week 15 early with an ankle injury. With Siemien out for the year, the Broncos will most likely be starting Brock Osweiler. Osweiler + Washington at home + Sanders out equals a disaster waiting to happen for this Denver offense.

The Chargers had a rough go of it in Week 15 against the Chiefs, but it was mostly thanks to Kareem Hunt having a career day. Otherwise the Chargers have been rather solid on defense. They get the Jets in Week 16, who have nowhere near the talent that Kansas City did. The Jets will also be starting Bryce Petty, who threw 2 interceptions to New Orleans this past week. The Chargers saw many injuries this past week, so this is probably the riskiest streaming option in Week 16.