In recent drafts, Mooney's current ADP is 7.03, which indicates that his fantasy outlook is in the 3rd pick of the 7th round, and 74th selection overall. 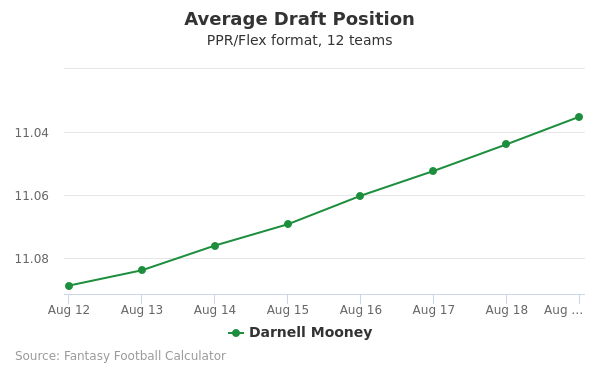 The code below will display a graph that updates every day to show the ADP data for Darnell Mooney for the past 30 days in 12-team PPR leagues.

Analysis: Despite the Bears having a mostly anemic passing attack throughout the season, Mooney showed that is on his way to becoming a star player. On four occasions, he recorded more than 120 yards and although he had just four receiving scores, the lack of touchdowns had more to do with the lack of quality at quarterback than his talent. He'll enter the third year of his four-year rookie deal in 2022, and he could be in line for a breakout season who'll likely be drafted as a top-30 wide receiver.

With six teams on a bye this week, all of which have several fantasy-relevant options, we’re going to need some streaming options. Do...
Read more »

Should I start Darnell Mooney?