In recent drafts, Waddle's current ADP is 4.04, which indicates that his fantasy outlook is in the 4th pick of the 4th round, and 40th selection overall. 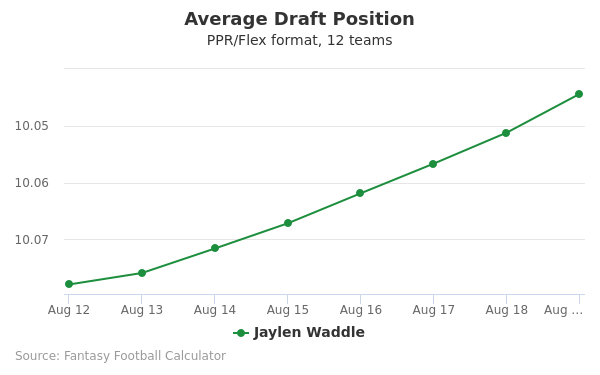 The code below will display a graph that updates every day to show the ADP data for Jaylen Waddle for the past 30 days in 12-team PPR leagues.

Waddle is likely to slide down the wide receiver depth chart following Miami's acquisition of Tyreek Hill in a trade with the Chiefs, Travis Wingfield of the team's official site reports.

Analysis: Waddle set an NFL rookie record with 104 catches last season, while also surpassing 1,000 receiving yards and scoring six touchdowns, but he no longer seems like the favorite for the No. 1 wideout spot entering the 2022 season. Hill, whose skillset inspires obvious comparisons to Waddle's, established himself as one of the top playmakers in the league during his time in Kansas City, and figures to operate as a pillar of new coach Mike McDaniel's scheme. The six-time Pro Bowler commanded 159 targets in 2021, while surpassing 1,100 receiving yards in four of the last five seasons. While there's still plenty of reason for excitement about Waddle's future, especially in dynasty formats, Hill's arrival could serve to limit the second-year pro's production upside for 2022. Mike Gesicki, Cedrick Wilson, and incumbent DeVante Parker also all stand to demand a share of targets, as well.

Having a strategy coming into a snake draft is extremely important to set yourself up for success. Obviously, you need to be flexible as...
Read more »

Should I start Jaylen Waddle?