In recent drafts, Pitts's current ADP is 3.12, which indicates that his fantasy outlook is in the 12th pick of the 3rd round, and 35th selection overall. 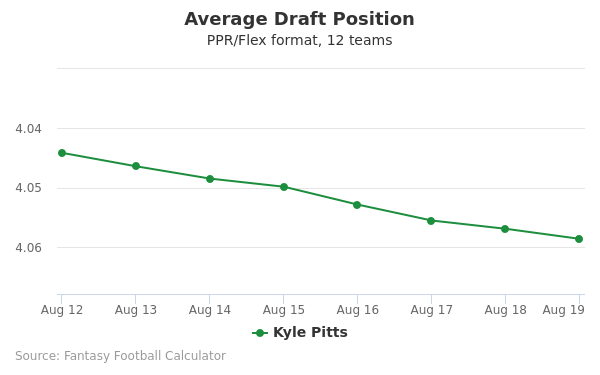 The code below will display a graph that updates every day to show the ADP data for Kyle Pitts for the past 30 days in 12-team PPR leagues.

Pitts caught two of five targets for eight yards during Sunday's 30-20 loss to the Saints.

Analysis: Pitts came into the contest listed as questionable due to a hamstring injury, but the rookie first-round pick was ultimately able to suit up. However, the tight end produced his worst performance of the season. He finished the 2021 campaign with 68 catches for 1,026 yards, but he only scored one touchdown. Pitts was as advertised during his first season in the NFL and was one of the lone bright spots on the Falcons' sporadic offense, but he will likely have to improve as a red zone threat in year 2 if he's going to takeover as a bona fide star.

Having a strategy coming into a snake draft is extremely important to set yourself up for success. Obviously, you need to be flexible as...
Read more »

Should I start Kyle Pitts?