In recent drafts, Mostert's current ADP is 5.08, which indicates that his fantasy outlook is in the 8th pick of the 5th round, and 55th selection overall. 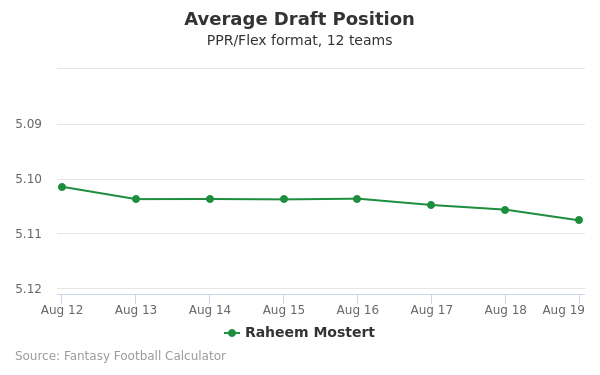 The code below will display a graph that updates every day to show the ADP data for Raheem Mostert for the past 30 days in 12-team PPR leagues.

Analysis: The main takeaway is that Mostert returned healthy for the start of training camp after dealing with a minor knee injury during OTAs. He's never returned a punt in a regular-season game and isn't likely to start at this point in his career, though he was largely valued for his work on special teams prior to a late-2019 breakout. Mostert then made eight starts for the Niners in 2020, but he left two of those games early and missed eight others, held back by knee and ankle sprains. He did put up 65.1 rushing yards per game and 5.0 YPC, and he displayed his trademark speed on an 80-yard TD run and a 76-yard receiving score in September. While the explosiveness may keep Mostert atop San Francisco's depth chart, Tim Kawakami of The Athletic suggests rookie third-round pick Trey Sermon "already seems to be pretty much 1B to [Mostert]'s 1A at the tailback spot."

Should I start Raheem Mostert?