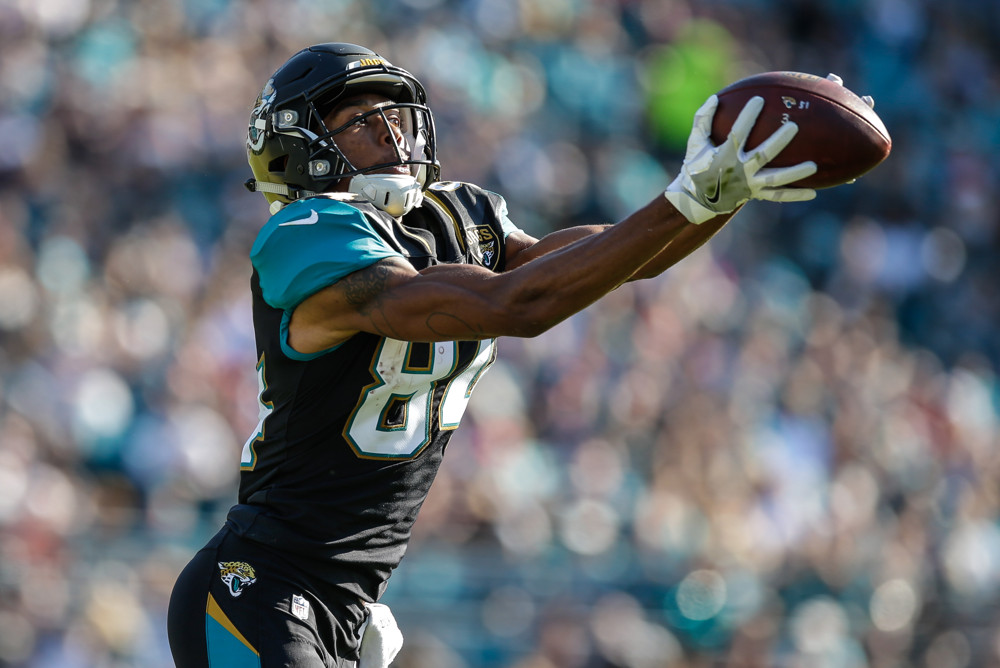 It's been four weeks since we last brought up a few PPR Wide Receiver Sleepers, which means we have four more weeks of news and data. The wide receiver ADPs in 12-team PPR drafts may have not changed a ton, but enough preseason games have happened to show what WRs might break out this season.

As many of you mock drafters have probably seen, the middle rounds seem to be dominated by solid wide receivers. As you continue on in your draft, however, there are plenty of wide receivers with decent upsides that may be overlooked entirely. Let's take a look at five more of these sleepers that may be worth taking a late round flyer on this 2018 season.

Most people have probably been looking at Michael Crabtree as the Ravens' number one receiver in 2018, but don't sleep on WR John Brown. So far through preseason Baltimore coaches have had nothing but praise for the fifth year wide receiver, and he seems to be building a nice rapport with QB Joe Flacco.

Brown has flashed in the past, catching 65 passes for 1003 yards and seven touchdowns in 2015 with Arizona. After that he never seemed to live up to the hype, but that was mostly due to a previously unknown sickle cell disease.

Now that Brown has managed the disease, look for him to possibly be the number one target for Flacco. Brown is currently going late in the 11th round as the 51st WR off the board. If Brown can stay healthy, he could easily outdo his ADP.

Unfortunately for the Jaguars, Marqise Lee went down with a gruesome knee injury in their third preseason game. Lee was predicted to be the number one receiver in Jacksonville, but QB Blake Bortles will now have to look elsewhere. The only problem is that it feels like Jacksonville has twenty receivers, so who will take Lee's place?

Well, we are going to take a guess and say that second year WR Keelan Cole will take that spot. Cole had a solid year in 2017 as a rookie, catching 42 of 83 targets for 748 yards and three touchdowns. There was a stretch late in the season where he had 99 yards, 186 yards, and 108 yards in consecutive games.

Cole is currently being drafted as the first pick in the 13th round. He is the 58th WR off the board. A 13th round ADP for a potential WR2 or WR3 is a massive selling point for Cole. If Bortles has the chance to throw a lot, Cole could be in for a huge season and you'll have spent almost nothing to get him.

Chris Godwin is another second year WR that has the potential to explode this year. His numbers may not look all that impressive when you look at the season, seeing as how he only caught 34 passes for 525 yards and one touchdown.

What is more impressive is how he finished 2017, catching 10 passes for a total of 209 yards and one touchdown (almost half his production). He looked electric in those two games, and through the preseason seems to be gaining QB Jameis Winston's trust more and more. Godwin has already caught multiple touchdowns this preseason.

If Godwin can become one of Winston's favorite targets, he will be in line for a ton of work this season. He is currently being drafted in the 13th round, two spots behind Keelan Cole as the 60th WR. Godwin is fast, athletic, and electric enough to have huge games for the Buccaneers. He may have to wait a few weeks for Winston to return from suspension, but once Jameis does, Godwin could return a great value.

Taywan Taylor was pretty much unknown in 2017, only catching 16 passes for 231 yards and one touchdown. But recently Taylor has been gaining some notoriety, having a huge preseason game where he caught four passes for 95 yards and two touchdowns. This is on top of his already good preseason camp; Taylor has been earning praise all summer.

Taylor is currently being drafted early in the 14th round as the 63rd WR off the board. With WR Rishard Matthews coming off of a knee injury, Taylor may have to impress early in order to keep a spot in the starting lineup.

That being said, Taylor has shown that he has some breakout potential in the Tennessee offense. If the Titans can have as good of a season as many think, Taylor could be a nice sleeper pick.

John Ross will probably be forever remembered as one of the only players to ever finish a season with negative fantasy points. Coach Marvin Lewis has always been against starting rookies, and he seemed to overreact when his first round rookie fumbled early in his first game.

This year it looks much more promising for Ross. In his third preseason game against the Bills he caught two passes for 66 yards and one touchdown came on a long 57 yard bomb that Ross caught and then juked multiple defenders.

Ross is currently being drafted mid-14th round as the 65th WR off the board. It seems like Ross is being trusted in 2018, since Cincinnati cut WR Brandon LaFell this offseason and Ross is getting more playing time. Ross should be a nice addition to WR A.J. Green, and his speed could turn him into a deep threat in the Bengals' offense.

Ross is a nice late round flyer as the WR2 in a potential bounce back offense.