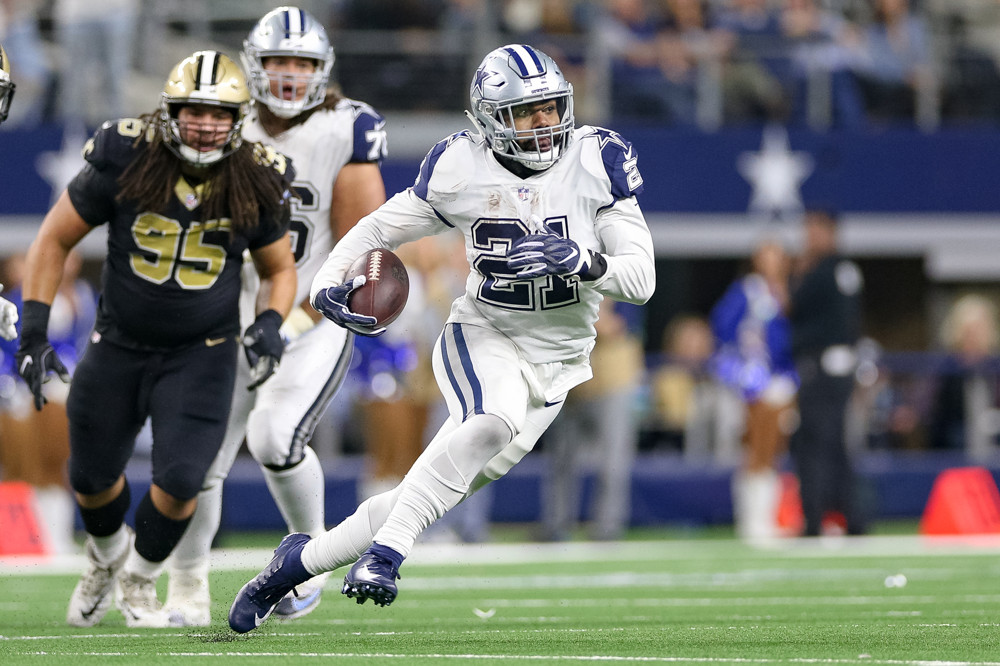 Like last week, a few late injury announcements created a number of value plays on the DraftKings' main slate. However, salaries appear much tighter this week, with byes in the rearview mirror. Heightening the importance of roster construction, a few key decisions could make the difference in cashing this week. With that said, here are this week's standout plays on the DraftKings' main slate.

Entering the week as the tenth highest paid quarterback, Baker Mayfield draws a winnable matchup against the Carolina Panthers. Carolina has allowed the fifth-most passing yards to quarterbacks over the past four weeks (1,133) and Mayfield has averaged 292 yards through the air in that span. With Cleveland also struggling on defense, Baker Mayfield warrants cash consideration in this sneaky shootout spot.

Priced slightly cheaper than the other stud backs, Ezekiel Elliott provides an immense ceiling against a collapsing Philadelphia Eagles defense. The Eagles have allowed the third-most yards to running backs over the last four weeks (556) and Elliott has touched the ball at least 25 times per game in that span. With arguably the highest touch projection on the slate, Elliott should land in cash and GPP lineups.

Supposedly stuck in a three-man time-share, Sony Michel has touch counts 23 and 18 in his last two games. With Rex Burkhead returning last week, the Patriots used two running backs on a league-high 32% of their plays, boding well for Michel's outlook. Earlier this year, Michel roasted the Fins for 112 yards and a score. With Miami allowing the fourth-most yards to backs (1,404) and the Patriots favored by 7.5-points, Michel should see ample running opportunities, keeping him in play in GPPs.

After two consecutive 6-target weeks, DeAndre Hopkins drew 12 targets in Week 13. On the year, his 115 targets ranks tenth in the NFL and his 1,460 air yards ranks sixth. Earlier this season, Hopkins tore up Indianapolis for 169 yards and a score on 10 catches. Truly one of the league's un-guardable receivers, Hopkins offers an ideal pivot off the other receivers in this range in GPPs.

Running it back on the other side, T.Y. Hilton remains too cheap at 6.3k for his target projection. With his targets rising on a weekly basis, Hilton has 27% of the Colts' targets and 39% of their air yards over the last four weeks. Hilton had 115 yards receiving in this matchup before leaving with an injury earlier this season. In a potential game stack situation, Hilton and Hopkins can be used in the same GPP lineups.

With DeSean Jackson not catching passes again this week, Chris Godwin could be in line for another big game. Last week without Jackson, he played 80% of the Bucs' snaps and recorded 5 catches for 101 yards and a score. Playing with the highest over/under on the slate (55.5-points) as 8-point underdogs, Tampa Bay projects to air it out in this game, boding well for Godwin. Godwin belongs in the cash conversation this weekend.

Still coming at a slight discount, Eric Ebron has seen elite usage without Jack Doyle on the field. In six games as the full time starter, Ebron has a massive 65 targets and 557 air yards. He takes this elite usage against a Houston defense that has allowed the sixth-most yards to tight ends (769). Ebron deserves consideration across game formats.