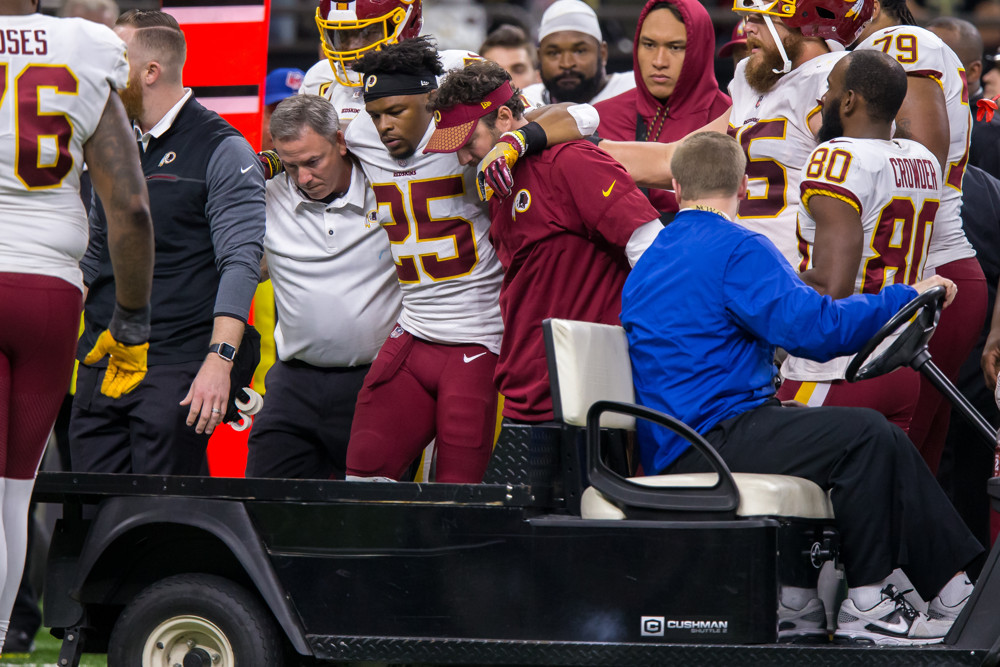 The gruesome nature of the NFL reared its ugly head once again in Week 11. On top of a few season-enders, many other players sustained multi-week injuries. This weeks Injury Update will examine the fallout from these injuries and what can be expected of the players going forward.

Chris Thompson suffered a broken leg in Sunday's loss to the Saints and will need surgery. Specifically, Thompson fractured his fibula. Thompson was having a career year before injury, but now the Redskins will now feature rookie Samaje Perine to close out the season.

Robert Woods left Sunday's game in the 4th quarter with an injury to his left shoulder. Woods was spotted after the game with his arm in a sling. According to coach Sean McVay, Woods will miss a couple games but avoided serious injury. This falls in line with an Ian Rapoport report, saying Woods avoided structural damage to the shoulder. While the specifics of Woods' injury remain unknown, Woods appears to be week-to-week.

Kelvin Benjamin left Buffalo's game against the Chargers with a right knee injury. Benjamin was carted to the locker room after a brief trip to the sideline medical tent. Benjamin reportedly avoided damage to his ACL, but will still miss some time. Benjamin is week-to-week for the time being, until the Bills release more updates.

Matt Forte hopes to return this week following the Jets' bye. Before the bye Forte had been dealing with swelling in his surgically repaired knee. In Forte's words, the injury had been getting significantly worse, which suggests he could be dealing with a multi-week injury. Perhaps the swelling has subsided during the bye, but Forte is legitimately questionable for Week 12.

Following a two-week absence, the Buccaneers again ruled out Jameis Winston for Week 12. Winston originally sprained his A/C joint in Week 5 and has missed the two previous games. According to Dirk Koetter, it will be at least another week until Winston begins throwing. The Buccaneers have been very cautions with Winston, so there is no guarantee he plays again this season. However, Koetter's has been positive, indicating Winston is likely week-to-week.

Jordan Reed first pulled his hamstring in Week 8, but has missed his last three contests. Reed admitted that he had a setback before Week 10, which caused him to miss the last two games. Reed practiced on a limited basis again last week, showing he is trending in the right direction. However, the Redskins ruled him out on Saturday last week, suggesting Reed was not all that close to playing. Consider Reed questionable for Week 12

Chris Hogan has missed the Patriots' last two games with a shoulder injury. Hogan originally sustained the injury at the end of Week 8 and reportedly would miss a few weeks. Hogan has yet to practice, but it is safe to assume the injury is more serious than originally thought. Hogan remains week-to-week until he can return to practice.

Devonta Freeman missed Monday's game with a concussion sustained in Week 11. Freeman did not practice at all last week and was ruled out early over the weekend. Freeman is not out of the woods with this injury, but he has a better chance to suit up in Week 12. He could come down to a game time decision.

Ty Montgomery missed Sunday's loss with a rib injury. Montgomery aggravated the injury in Week 11 and has yet to practice. Ribs often come down to pain tolerance, so Montgomery's practice time will be important this week as he prepares for game action. He likely will come into the game as questionable.

On Monday, Coach Bill O'Brien said he was unsure if Will Fuller would suit up for Week 12. Fuller is suffering from cracked ribs, sustained in Week 10. The injury often comes down to pain tolerance, but can take multiple weeks to heal. Like Montgomery, practice will be crucial for Fuller. For the time being, consider him questionable.

Greg Olsen started out the week on the right foot with a full practice. Olsen broke his foot in Week 2, but appears ready to make his return. Foot injuries can be troublesome and have been known to linger. Watch Olsen's status throughout the week as a precautionary measure in case he suffers a setback.

Added to the injury report late last week, Sterling Shepard missed Week 11 with migraines. Shepard participated in a limited practice on Monday, but was downgraded to a non-participant on Tuesday. Coach Ben McAdoo said the team was trying to determine the source of Shepard's migraines for the time being. Shepard appears to be on the wrong side of questionable for Thanksgiving's game.