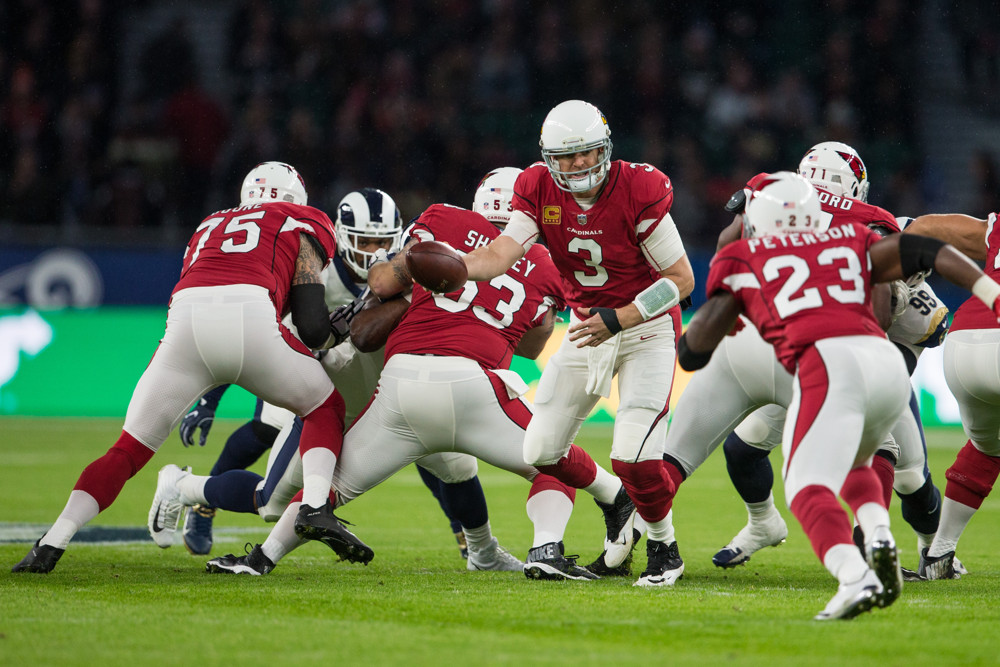 For the first time this season, week 7 resulted in a limited amount of injuries. Despite the reduced carnage, a few key stars continue to nurse various ailments. Week 8's Injury Update will feature a few new injuries and a slew of nagging injuries that continue to plague a few players.

Carson Palmer suffered a broken left arm in the second quarter of Sunday's loss. Initially given an 8-week recovery diagnosis, Palmer is going in for a second opinion in hopes that he can play again in 4-6 weeks. The second opinion may not matter, if the Cardinals are out of playoff contention before his return. However, this could decide whether Palmer plays again this season or even again in his career.

Like the Cardinals, the Dolphins also lost their signal caller early on Sunday. According to Adam Schefter, Jay Cutler cracked two ribs and will be sidelined for 2-3 weeks. In Cutler's absence, Matt Moore led the Dolphins to a comeback victory. If Moore continues to play well, there is no guarantee Cutler retains the starting job once he returns.

Initially spraining his ankle in week 6, Emmanuel Sanders missed Sunday's game against the Chargers. Coach Vance Joseph said on Monday that Sanders is day-to-day and has a chance to play this week. Sanders needs to make it onto the practice field before he returns to game action. For now, consider him on the wrong side of questionable.

The Vikings ruled out Stefon Diggs early ahead of week 7. Dealing with a groin injury, Diggs has missed the last two games. He has yet to practice and should be considered week-to-week until he is able to return to at least a limited session.

Initially spraining his ankle in week 5, Parker hopes to return for Thursday's primetime game. He was listed as a non-participant for Monday's session, but he appeared on the field on Tuesday. While it is a step in the right direction, Parker is far from a lock to play this week. Parker will likely draw the questionable tag and should be considered day-to-day.

After suffering a setback to his surgically repaired throwing shoulder, Andrew Luck's return this season appears doubtful. Luck experience soreness in the shoulder, following a practice session last week. He has already been ruled out for week 8, but Ian Rapoport reported that Luck will return this season if healthy. This is a big if and Luck's return should be considered doubtful until he returns to practice. He has been droppable for weeks in fantasy leagues.

CJ Prosise aggravated his sprained ankle on his first snap of this weekend's game. Playing a mere two snaps, Prosise ended the game without a touch. After costing him two games earlier in the season, Prosise is on the wrong side of questionable for week 9. It would be wise for Seattle to allow Prosise to fully heal before he steps back onto the field.

Delanie Walker suffered an ankle injury late in Sunday's game and was seen on crutches in the locker room. Despite the scare, coach Mike Mularkey announced on Monday that Walker is dealing with a bone bruise. This is good news for Walker, who was thought to be dealing with an ankle sprain. Playing will come down to pain tolerance for Walker. On bye this week, there is a good change the Titans have their star tight end for week 9.

After missing the past two weeks with an injured shoulder, Jeremy Maclin is finally expected to return this week. Maclin practiced on a limited basis on Monday and Tuesday, but he may be listed as questionable before Thursday's game due to the short week. Either way, he appears likely to return and will provide a boost to the Baltimore receiving unit.

Golden Tate initially injured his shoulder in week 6 against the Saints. He was spotted on Saturday wearing a sling and the Lions listed him as a non-participant for Monday's practice. Although the Lions have not given a timetable for Tate, he appears doubtful for this weekend's game. For now, he should be considered week-to-week.