In recent drafts, Diggs's current ADP is 2.06, which indicates that his fantasy outlook is in the 6th pick of the 2nd round, and 17th selection overall. 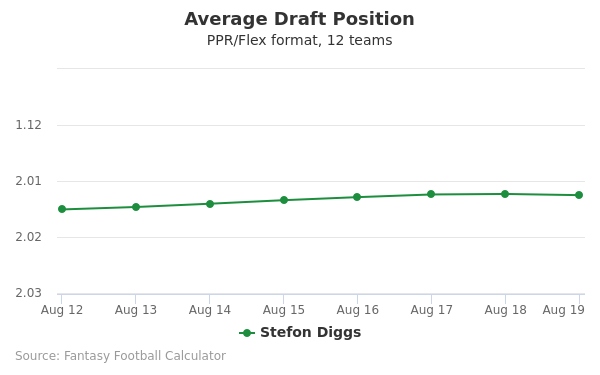 The code below will display a graph that updates every day to show the ADP data for Stefon Diggs for the past 30 days in 12-team PPR leagues.

Diggs agreed to terms on a four-year, $104 million contract extension with the Bills on Wednesday, Adam Schefter of ESPN reports.

Analysis: Diggs still had two years remaining on his five-year, $72 million contract, but after seeing the wide receiver market undergo a sea change this offseason, Buffalo decided not to wait things out. The four-year extension adds onto Diggs' previous contract, tying him to the Bills for the next six seasons. Diggs, who hasn't missed a regular-season game in his two years with Buffalo, racked up a career-high 1,535 receiving yards in 2020, and he set another career mark with 10 touchdowns in 2021. The 28-year-old will continue to enjoy his position as Josh Allen's top target heading into the 2022 campaign, a combination which has proven highly valuable for fantasy purposes.

Should I start Stefon Diggs?

Diggs played for and attended Our Lady of Good Counsel High School in Maryland. The school is located in Montgomery County. Diggs also ran track and and was awarded many athletic accolades for his performance in sports. He racked up 810 yards for receiving in 2010. That same year, he also recorded 23 touchdowns. He was a junior in high school at the time. His senior year, Diggs collected 770 yards with 8 touchdowns. He also had 277 rushing yards. He was runner up for Gatorade Maryland Player of the Year, All-metro selection from the Washington Post and All-County by the Montgomery Gazette. Another notable achievement was being named Most Valuable Player (MVP) of the U.S. Army All-American Junior Combine in 2011. A year later, he was invited to play in the 2012 U.S. Army All-American Bowl.

Diggs attended college at Maryland and his many highlights include playing as a wide receiver on special teams and ranking second and eighth in the American and National conferences respectively. Diggs broke a number of college football records including the second most all-purpose yards in a single season.

Diggs has a 35-inch vertical, according to sources like MockDraftTable. His broad jump is 115 inches and his hand size is ten inches. This makes him an agile and powerful NFL player with a contract for the Vikings. In January 2016, Diggs was named to the Pro Football Writers of America's 2015 NFL All-Rookie Team. Diggs' 40 time is also impressive, coming in around 4.4, which is extremely fast. According to Spotrac.com, his salary is in the low single millions: he signed a 4-year, $2,507,713 contract with the Vikings. There were also several bonuses and endorsements.

Diggs promotes himself, his team, his endorsements and his good service to the community of the Twin Cities on social media, including his Twitter account. His latest Tweets have included retweets from sports media channels discussing Diggs' career as well as his shopping experiences with Amazon Prime.

Diggs is in his second season with the NFL, going on the third. He has only played for the Vikings. He has had 7 career touchdowns, more than 1,600 yards, an average of almost 12 yards per game and 26 yards rushing, according to the Official Minnesota Vikings website.

Diggs' player number for the Vikings is 14. He was born in Alexandria, VA in 1993. His birthday is November 29. He is six feet tall and weighs just under 200 lbs. He was once suspended in a game against Penn State, but he has had little negative controversy in the NFL.