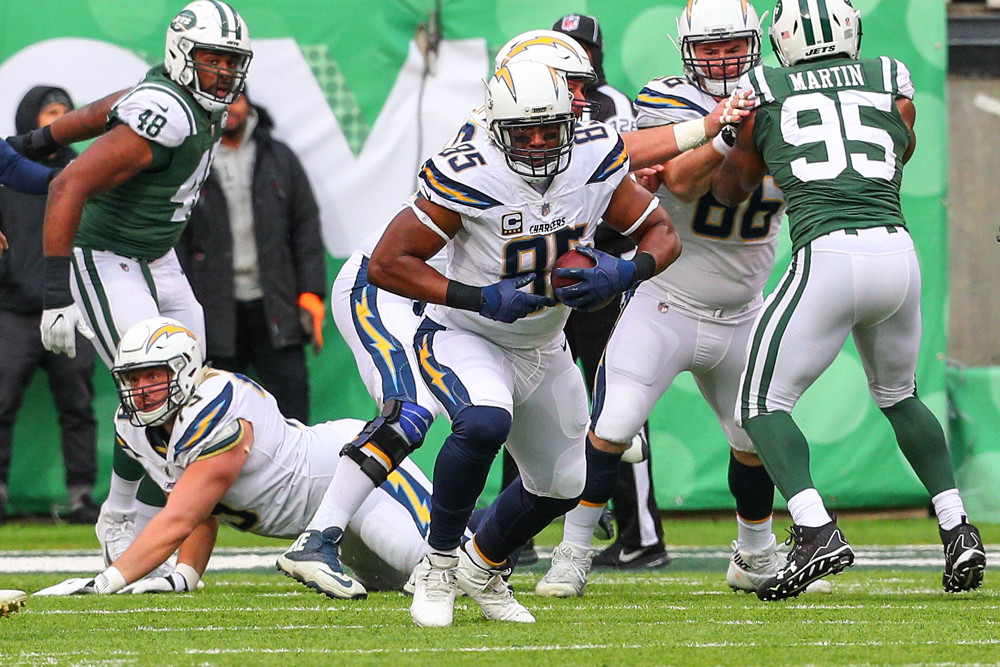 Week 17 is always tricky with some teams resting players, and no position will be affected more than tight end. Players like Travis Kelce and Zach Ertz will likely watch most of their Week 17 game from the bench as they rest up for the playoffs, forcing fantasy owners to grab a streaming option for the final game of the season. So what Week 17 tight ends should you grab?

Good God, is that Antonio Gates's music?! Hunter Henry is on the IR, so Gates was thrust back into a leading role last week and responded with his best game of the season, six catches for 81 yards and a touchdown. He should be great again this week in what could be the last game of a storied career for the Chargers, with an incredible 114 receiving touchdowns. Oakland has allowed the most receiving yards to opposing tight ends, nearly 1000 yards, so Gates should go out in style.

Always start your 2017 tight end against the Giants. New York hasn't been quiet as awful against tight ends lately but has still allowed a league worst 13 touchdowns and the second most yards. Davis hasn't seen as many targets lately as he had earlier in the season but he has found the end zone in two of the past three games and he has a great chance to find it again here.

Doyle has quietly been one of the best non-stud options at tight end this season, especially in PPR leagues. He has ten games of at least eight points and five games of 14 or more, and he had one of his best games of the season against the Texans the last time out. Houston has struggled to defend tight ends all year, so Doyle should see plenty of action again.

It's a revenge game for Charles Clay, and he usually enjoys playing the Dolphins with three touchdowns in five career games against them. Clay looks healthy now, and the Bills need a win to have any chance of sneaking into the playoffs. He should be Tyrod Taylor's go to target against a defense that has leaked points to tight ends all season.

James is a great option if you're looking to take a big swing at tight end. Cleveland has allowed the most receptions and second most touchdowns to tight ends, and James could see a lot of extra work with the Steelers missing Antonio Brown. He had a huge 10-catch 97-yard game just two weeks ago, but he also looked like a great play last week and then didn't have a single catch, so there's a lot of variance in play here. If you're up for a high risk high reward play, James is your guy.