It's impossible to draft Antonio Brown too high

2016 marked Antonio Brown’s 4th consecutive season above 1,200 yards receiving. As consistent as they come, Brown has averaged 1,579 yards over the past 4 seasons as Pittsburgh’s top receiver. During that time he also averaged 11 touchdowns per year.

The graph below shows his consistent fantasy football ADP over the past month. Data is from 12-team standard mock drafts. 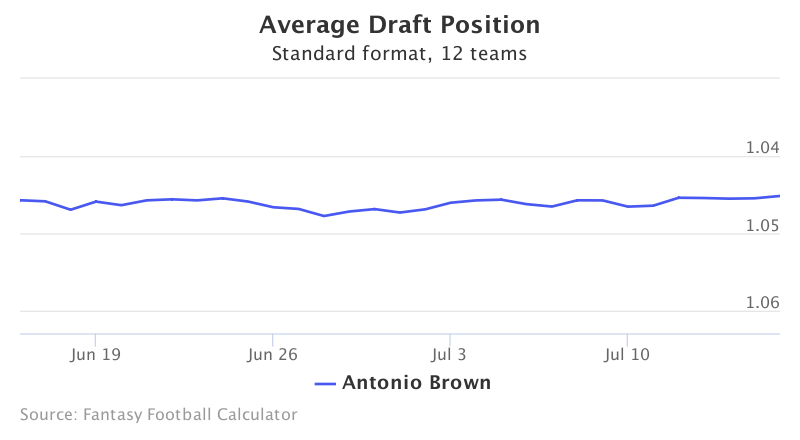 Brown’s ADP has not moved over the past month, but even 1.04 may be too low for the league’s premier receiver.

Brown has one of the league’s most valuable roles in Pittsburgh’s offense. Brown’s target totals over the past four seasons have been 165, 182, 195, and 155 respectively. The last two years this has resulted in target shares of 33% and 27.8%. With these totals Brown has never fallen below 106 receptions. Only three other players have been able to eclipse 90 receptions each of the last three seasons.

Looking a bit deeper, Brown’s role particularly valuable for two reasons. First, Brown is the primary red zone option on his team. Although, he stands only 5’10” Brown has received 30.8% and 23.4% red zone target share each of the last two years. This has been a large factor in Brown sustaining such high touchdown totals the last four seasons.

Additionally, Brown has proven to be one of the league’s elite deep weapons. His 2.47 yards per route run ranks second during his time in the league. Likewise, when targeting Antonio Brown deep, Ben Roethlisberger’s passer rating is 124.6. In fact, Roethlisberger was above average in passer rating in all deep portions of the field. This is due in large part to Antonio Brown’s exceptional route running.

Given his role as the league’s safest pass catcher, Antonio Brown is a value at an ADP of 1.04. David Johnson, Ezekiel Elliott, and Le'Veon Bell are going just ahead of Brown. However, it is not unthinkable to reach a few picks and lock up the league’s most consistent receiver.