Ben Roethlisberger's fantasy value is measured by his average draft position (ADP) in fantasy football mock drafts. In recent drafts, Roethlisberger's current ADP is 5.11, which indicates that his fantasy outlook is in the 11th pick of the 5th round, and 58th selection overall. 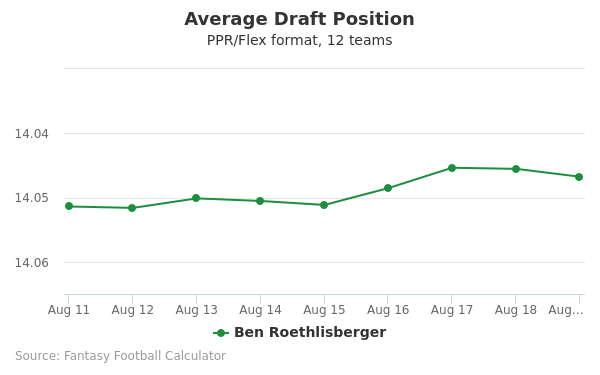 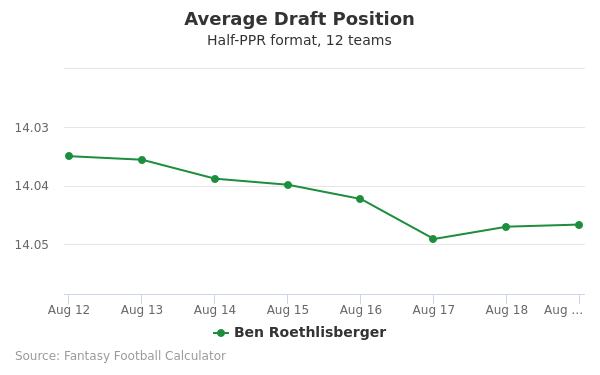 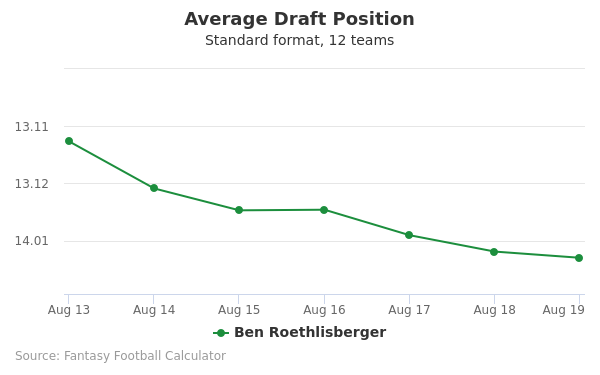 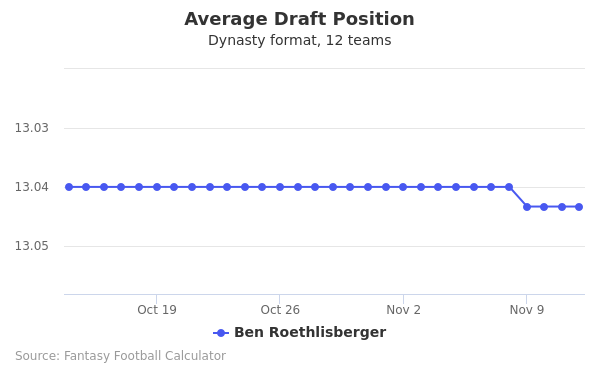 The code below will display a graph that updates every day to show the ADP data for Ben Roethlisberger for the past 30 days in 12-team PPR leagues.

Should I start Ben Roethlisberger?

Should You Start Ben Roethlisberger This Week?

Born March 2, 1982 in Lima, Ohio, Ben Roethlisberger entered the world and set on his path to change the sport of professional football, not to mention charge up Twitter fans every Sunday. He has since set a number of records on his own, including being the among the youngest quarterbacks in the NFL as well as one with a Super Bowl title and participation to his name. However, those great days first took some trying experiences Roethlisberger had to go through first to get there.

At a very young age the famous quarterback’s parents separated and divorced. Then, to add onto the psychological burden, Roethlisberger’s mother was killed in an unexpected and tragic vehicle accident before he turned nine. Amazingly, his resilience carried him through. Instead, Roethlisberger put his energy and angst into sports, first becoming a noticeable basketball player. However, by senior year in high school, his quarterbacking talents started to manifest, throwing a whopping six touchdown passes in the first game he played as a start. That set off a whirlwind performance, and by the end of the same high school season Roethlisberger collectively passed well over 4,000 yards and put at least 54 touchdown connections on the board. That got him college attention and a tenure at the Miami of Ohio University. By the time Roethlisberger was done with his alma mater, he had gained the title of All-American among related highlights.

The Pittsburg Steelers hired Roethlisberger as an 11th round NFL draft in 2004. It was a good draft position to be in for both him and the team, avoiding the chatter of the very first picks which typically end up on the worst teams of the NFL to balance out the talent pool.

Roethlisberger’s rookie year was no exception to his high performance, and the Steelers were able to enjoy a 14 to 1 record season thanks to Roethlisberger’s vertical climbing throwing talent and fast bursting 40 time power at 4.75 seconds. His skill also got the team the AFC championship title as well for the same year. However, prima donnas fade out after their first big burst, and Roethlisberger had to work hard not to end up burning out or worse, hurting himself the second season. That caused a bit of a lackluster performance in the first part of his comeback but the quarterback made up for it by ending 2005 with leading the Steelers to a Super Bowl win.

Unfortunately, the following summer almost ended Roethlisberger’s career. Injured in a very serious motorcycle accident without a helmet, the quarterback not only had to recuperate and get back to playing shape, then he had to combine the early part of the 2006 season recovery with getting back to his prime performance level. Amazingly, Roethlisberger accomplished both, and he put 3,153 passing yards on the board for 2006. Granted, he worked hard and delivered, but a triple third year was not in the cards, and the Steelers ended the season out of the playoffs.

In 2010 Roethlisberger was back with the Steelers in the Super Bowl against, of all teams, the Green Bay Packers. It was reminiscent of the Steelers Super Bowl dynasties in the 1970s. However, a win was not in the cards for the quarterback that year. Despite a lot of fight and a number of points put on the board with his passes, Roethlisberger and the Steelers lost the game in a painful 25-40 match.

By 2015 the quarterback who won a Super Bowl at the age of 23 was now sitting at 33 with joint injuries and similar catching up to him. Ankle damage and bone bruising took him out of at least five games in the 2015 season. Roethlisberger had, only a year before, produced and amazing 2014 season in which he performed his most scoring passes at 32 connections, his highest completion percent to total at 67%, and his most passing yards over 4,950. Yet again, in 2015, after making it almost all the way to the Super Bowl, the Steelers gave up the chance in playoff game to the Denver Broncos and were sent to the sidelines for another season. By 2016, Roethlisberger was out again, this time with a blown knee and subsequent surgery causing more missed games. Fortunately, he had signed a five-year extension of his contract in 2015, securing a solid salary and position despite the injury affecting his game time.

2017 may offer more opportunities, but Roethlisberger is now facing time and age, a punishing physical combination for an older quarterback.