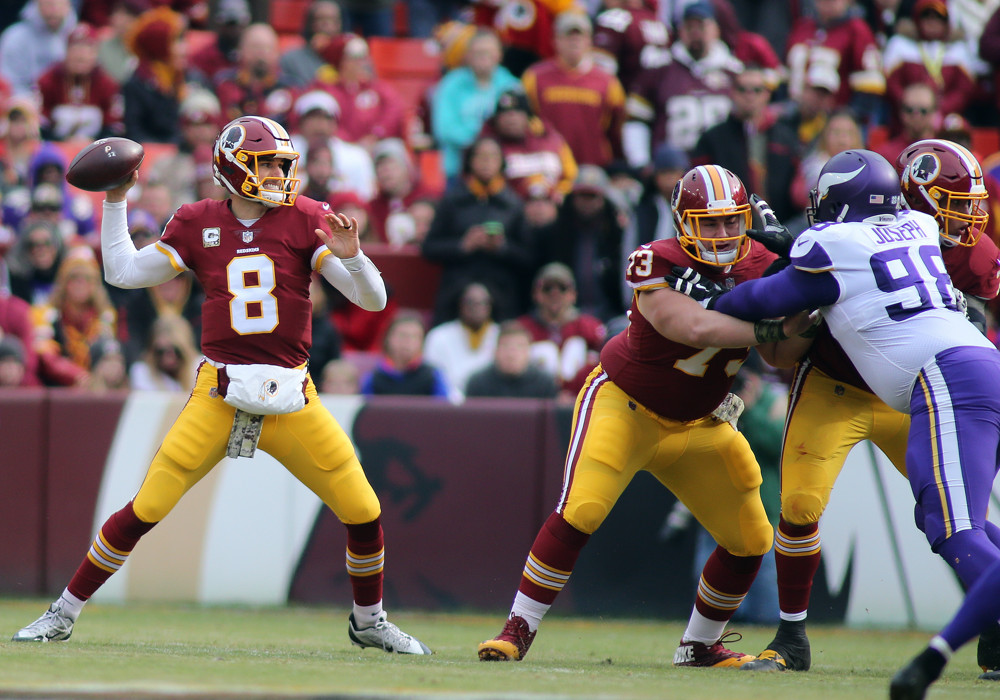 Let's review the best and the worst fantasy performances through Thursday and Sunday's games so far in Week 10's Fantasy Football Wrap Up.

Kirk Cousins had himself a fantastic game against the Vikings defense on Sunday, throwing for 327 yards and 2 touchdowns with 1 interception. On the ground is surprisingly where Cousins scored most of his points, rushing for 2 short-yardage touchdowns on 4 carries. Cousins continues to have a productive fantasy season and finished Week 10 with 27.60 fantasy points. Jared Goff has continued to dominate this season and this week was no different. Against the Texans Goff threw for 355 yards and 3 touchdowns, while rushing for 3 yards on 4 carries. Goff finished as the second-highest scoring quarterback of the week with 26.50 fantasy points.

After finishing as the second-highest scoring QB in Week 9, Tyrod Taylor had a complete-180. Taylor could not produce against the Saints and was held to 56 yards through the air while throwing 1 interception. Taylor was eventually pulled from the game once it got out of hand, and finished the day with 2.90 fantasy points. With a few QBs on byes, Josh McCown was seen as a viable replacement against a weak Buccaneers defense. While McCown threw for 262 yards, 1 touchdown, and 1 interception, he finished the week as the 23rd-ranked quarterback with 12.50 fantasy points.

For the second time in as many weeks, a Saints running back finished as the highest-scoring running back. Mark Ingram ran all over the Buffalo Bills on Sunday, rushing for 131 yards and 3 touchdowns on 21 carries. Ingram has thrived with the departure of Adrian Peterson and totaled 31.10 fantasy points in Week 10. The second-highest scoring running back of the week was DeMarco Murray who scored 29.20 fantasy points. Murray had 14 carries and ran for 42 yards and 2 touchdowns while catching 4 passes for 30 yards and 1 touchdown.

Bilal Powell had a good matchup on paper this week but failed to make an impact. Powell gained 30 yards on 10 carries, lost a fumble, and had 1 catch for 6 yards. Powell left owners shaking their heads as he finished the day with 2.60 fantasy points. Adrian Peterson had a game to forget on Thursday night, as he was only able to gain 29 yards on 21 carries. Peterson also fumbled the ball on his first carry of the game and only caught one pass for 13 yards, finishing with 3.20 fantasy points.

Robert Woods finished as the highest scoring wide receiver in Week 10 with 37.10 fantasy points. Woods had 8 receptions for 171 yards and 2 touchdowns and has now scored 2 touchdowns in back-to-back games. Adam Thielen torched the Redskins defense for 166 yards on 8 receptions and scored 1 touchdown. Thielen finished the day with 30.60 fantasy points and was the second-highest scoring wide receiver of the week.

Two receivers that have been without their Pro-Bowl quarterbacks in T.Y. Hilton and Jordy Nelson both disappointed on Sunday. Hilton caught 2 passes for 23 yards, totaling 4.30 fantasy points and Nelson was only able to haul in 3 catches for 20 yards for a total of 5.00 fantasy points. Hilton failed to produce after scoring 34.50 points a week ago while Nelson hasn't been the same without Rodgers, scoring 14.80 points combined over his past three games.

The highest-scoring tight end from this past week was Jimmy Graham who hauled in 6 receptions for 27 yards and 2 touchdowns. Graham continues to be utilized near the red zone and finished Thursday night's game with 20.70 fantasy points. With many high-profile tight ends on byes, Jermaine Gresham found himself as the second-highest scoring tight end of the week with 5 receptions for 64 yards and 1 touchdown. Gresham has now scored in back-to-back weeks and finished Week 10 with 17.40 fantasy points.

Hunter Henry was unable to provide any value on Sunday against the Jaguars as he only had 1 catch for 7 yards, a total of 1.70 fantasy points. Meanwhile, Cameron Brate's slump continued this week as he only caught 1 pass for 10 yards. Brate was only able to score 2.00 fantasy points and over his past two games, he only has 2 catches for 19 yards.

The highest-scoring defense of Week 10 was the Atlanta Falcons Defense who held the Cowboys to 7 points on Sunday. With their backup left tackle playing, the Falcons got to the quarterback early and often. The defense recorded 8 sacks and had 2 fumble recoveries, en route to scoring 17.00 fantasy points. The second-highest scoring defense this week was the Los Angeles Rams Defense who had 3 sacks, 2 interceptions, 2 fumble recoveries and scored a total of 16.00 fantasy points.

Greg Zuerlein continues to be the hottest kicker in fantasy - this week he kicked field goals from 27, 2 from 33, and 50 yards out and converted 3 extra points. Zuerlein scored 17.00 fantasy points this week and finished as the highest-scoring kicker this week. Zuerlein has now scored 17.00 fantasy points in three consecutive games this season. The second-highest scoring kicker was Washington Redskins' Nick Rose who was able to convert 3 field goals from 21, 28, and 55 yards out and kicked 3 extra points, totaling 14.00 points on the week.