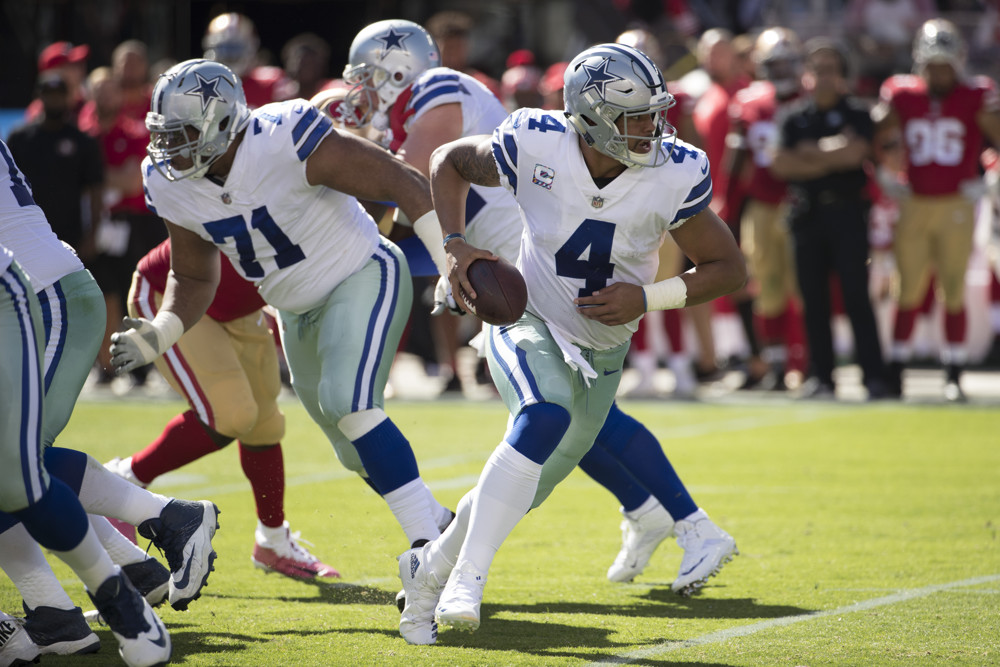 With many teams failing to score offensive touchdowns this week, let's see how this affected the best and the worst fantasy performances through Thursday and Sunday's games so far in Week 7's Fantasy Football Wrap Up.

Derek Carr bounced back and exposed the Kansas City Chiefs defense in Week 7, a week after being listed as a disappointment after his 6.80-point performance. With no running game to speak of, Carr was able to throw early and often, throwing for 417 yards, 3 touchdowns, while carrying the ball once for 15 yards. Carr finished as the 1st ranked quarterback of the week with 30.20 fantasy points. Dak Prescott took full advantage of a great matchup this week against the 49ers and finished as the second-ranked quarterback of the week. Prescott threw for 234 yards, 3 touchdowns, and 0 interceptions while gaining 26 yards on 4 carries and 1 touchdown on the ground. Prescott finished Week 7 with 30.00 fantasy points and has now thrown 3 touchdowns in his last three contests.

Cam Newton could not improve on his Week 6 performance as his offense failed to score an offensive touchdown against the Chicago Bears. Newton threw for 211 yards, 0 touchdowns, 2 interceptions, and added 8 yards rushing on 3 carries. Newton finished the week as the 23rd ranked quarterback and scored 7.40 fantasy points. Marcus Mariota didn't fare much better on Sunday when he faced the Cleveland Browns and although his team won in a kicking duel, Mariota threw for 203 yards, 0 touchdowns, and 0 interceptions. Mariota added 8 yards on 1 rush and totaled 8.90 fantasy points.

Marshawn Lynch officially hit rock bottom against the Chiefs as he only carried the ball twice for 9 yards, and was not targeted in the receiving game. Lynch recorded a season-low 0.90 fantasy points and now finds himself suspended for their Week 8 matchup against the Bills. Adrian Peterson came crashing down to reality in his matchup with the Rams in London, England who was not able to get anything going. Peterson faced stacked-boxes all day was only able to gain 21 yards on his 11 carries and 12 yards on 1 reception, totaling 4.30 fantasy points. After finishing last week ranked as the fourth-ranked rusher, Peterson finished this week as the 48th ranked running back.

Amari Cooper finally showed up for fantasy owners on Thursday night and torched the Chiefs, hauling in 11 receptions for a career-high 210 yards and 2 touchdown passes. Cooper's monster night resulted in 44.00 fantasy points, which is the second-highest amount scored in any week this season, and resulted in Cooper finishing Week 7 as the highest-scoring player. In DeVante Parker's absence, Kenny Stills finished the week as the second-highest scoring wide receiver with 6 receptions for 85 yards and 2 touchdowns. Stills finished with 26.50 fantasy points and has now found the end zone 3 times in 2 weeks.

After posting season highs in catches (7) and receiving yards (88) last week, it looks like that may have given owners false hope. On Sunday Eric Decker had 0 catches on 2 targets against the Cleveland Browns, resulting in 0 fantasy points. Jordy Nelson is not yet on the same page as quarterback Brett Hundley as he was only able to haul in 1 of 4 targets for a season-low 13 yards receiving. Nelson finished the week with 2.30 points and surely cost owners a victory with the underwhelming performance.

The highest-scoring tight end from this past week was Buccaneers' rookie O.J. Howard who caught all 6 of his targets for 98 yards and 2 touchdowns. Howard bested teammate tight end Cameron Brate this week and scored a total of 27.80 fantasy points, finishing the week as the highest-scoring at the position. Another rookie finished the week as a top-scorer at the position, as Evan Engram finished with the 2nd most fantasy points for tight ends with 18.00. With Engram being the only legitimate receiving option for the Giants, Engram caught 6 of 12 targets for 60 yards and 1 touchdown.

George Kittle was this past week's start of the week and was that ever wrong - he was not involved in the offensive plan as the 49ers were blown out at home against the Cowboys. Kittle caught 1 of 2 targets for 16 yards and scored 3.60 fantasy points. Martellus Bennett continues to disappoint, posting a season-low 17 yards on 2 receptions for 3.70 fantasy points. While Martellus Bennett (along with many others) is pure name value who hasn't delivered so far this season, owners may be better off streaming the position than squeezing him in the lineup every week praying for a touchdown.

The highest-scoring defense of the week was the Chicago Bears Defense who got to Cam Newton early and often. The Bears recorded 2 interceptions (1 returned for a pick-six), 1 fumble recovery (returned for a defensive touchdown) and 5 sacks. Additionally, the Bears only allowed 3 points against and scored 29.00 fantasy points. The second-highest scoring defense this week was the Los Angeles Chargers Defense who had 1 interception, 2 fumble recoveries, 5 sacks and a punt returned for a defensive touchdown. The Chargers shutout the Broncos are finished with 24.00 fantasy points.

For the second time in two weeks, Minnesota Vikings' Kai Forbath finished the week as the highest scoring kicker. Forbath missed his only extra point attempt but was able to kick 6 field goals from 32, 34, 43, 43, 51, and 52 yards out, totaling 24.00 fantasy points. The second highest scoring kicker of the week was Chris Boswell who kicked field goals from 22, 24, 25, 41, and 49 yards while adding 2 extra points. Boswell finished Week 7 with 19.00 fantasy points.