Geoff Swaim Primed for starting role: Swaim is the clear favorite to begin the season as the Jaguars' starting tight end, Phillip Heilman of The Athletic reports.

Our take: Swaim entered training camp with an edge for the starting job over rookie third-round pick Josh Oliver, but now that Oliver is sidelined with a hamstring injury Swaim should begin the season as the top option at the position. The 25-year-old played in only nine games with Dallas due to wrist surgery last season and posted a modest 26 receptions for 242 yards and one touchdown, which still eclipsed Jacksonville's most productive tight end. If Swaim can stay healthy he should provide a sizable red-zone option for QB Nick Foles in an offense lacking elite pass catchers.

Tommy Sweeney Temporary first-team looks: Sweeney has been seeing looks with the first team, as three other tight ends are working through injuries, Nate Mendelson of the Bills' official site reports.

What it means: Sweeney, a rookie seventh-rounder out of Boston College, may have originally been a question mark to make the team, but several injuries have pushed him up the depth chart. Right now he's the top pass-catching tight end in camp. Tyler Kroft (broken foot) is expected back somewhere around the start of the regular season, while fellow rookie Dawson Knox (hamstring) will probably be back sooner. Lee Smith is locked in with a roster spot but is primarily a blocker. As of now, Sweeney probably has the edge over Jason Croom (hamstring) if only because he's healthy and the Bills can only afford to carry so many injured guys.

The fantasy value of Hunter Henry is measured by his average draft position (ADP). The graph below shows how it's trending in the latest mock drafts . In recent drafts, Henry's current ADP is 6.05

Watch out to see if Henry's value changes in light of this update.

George Kittle Healthy in camp: Kittle has been a full participant in camp after recovering from a minor hip injury.

Fantasy impact: Kittle dealt with several injuries last season, and even admitted to playing through broken ribs during his incredible breakout campaign in 2018. After overcoming this minor hip injury, the 25-year-old appears to be healthy heading towards the regular season. To further ease fantasy owners' thoughts, Kittle was caught making a leaping 20-yard touchdown catch from Jimmy Garoppolo during Saturday's 11-on-11 practice.

The fantasy value of George Kittle is measured by his average draft position (ADP). The graph below shows how it's trending in the latest mock drafts. In recent drafts, Kittle's current ADP is 3.10

How much this impacts Kittle remains to be seen. 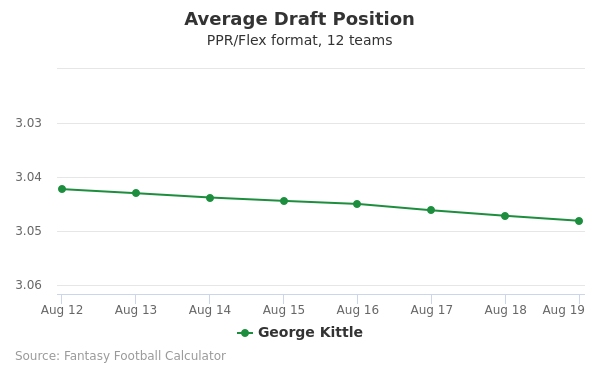 Bucky Hodges Let go Saturday: Hodges was released by the Jets on Saturday.

Fantasy impact: The move was made in order to free up a roster spot for center Ryan Kalil. It's possible Hodges could catch on with another team during the preseason, but he'd need to make a significant impression on the coaching staff as the third-year tight end is not eligible for the practice squad this season.