Javon Wims Could have role in offense: Wims looked good during offseason workouts and appears primed to compete for a role on offense, according to Larry Mayer of the Bears' official website.

Our take: The 2018 seventh-round pick led the NFL with 227 receiving yards last preseason, earning a spot on Chicago's 53-man roster throughout the year. He was active for four contests, including a four-catch, 35-yard outing Week 17 against Minnesota. The path to a meaningful role in 2019 appears difficult after the Bears bolstered their wideout depth with the signing of Cordarrelle Patterson and drafting of Riley Ridley, but there is some chance for Wims to make a push toward the No. 4 spot. Other candidates for depth roles include Marvin Hall, Emanuel Hall (sports hernia) and Tanner Gentry.

Emmanuel Sanders Easing into camp: Sanders (Achilles) expects to ease into training camp, Ryan O'Halloran of The Denver Post reports. "I don't even know if I'll do the conditioning test [Wednesday]," Sanders said Tuesday. "As far as practice, I'm definitely not going to be going full-go from the jump."

What it means: Sanders has made impressive progress from a torn Achilles, which wiped out his ninth pro season on Dec. 5. To date, he's been running full speed since early May, and on June 7 he progressed to route-running that included sharp cuts. Even with that behind him, Sanders seems to be taking a logical approach in the later stages of his recovery, increasing his workload by the day until the Broncos' training staff clears him for all activity. There's no telling whether he'll be available Week 1, but the lack of established pass-catching options in this corps could help his cause once he's deemed ready for game action.

It's possible to track the change in Emmanuel Sanders's fantasy value over time by looking at where he's drafted. According to the latest PPR average draft position data, he's being drafted in at the 11.07 spot.

Andy Isabella Poised for Week 1 role: Isabella has a chance to earn an immediate role on offense, Darren Urban of the Cardinals' official website reports.

Fantasy impact: Larry Fitzgerald and Christian Kirk are locked in for key roles, leaving Isabella to compete with a couple other rookies (Hakeem Butler, KeeSean Johnson) and a slew of veterans (Trent Sherfield, Kevin White, Damiere Byrd, Chad Williams) for the third and fourth spots at wide receiver. The No. 4 receiver doesn't get many snaps in a typical NFL offense, but it'll be a different story in Arizona if coach Kliff Kingsbury's pro version of the Air Raid is similar to what he used at Texas Tech -- a scheme heavy on four-wide sets. Given that Charles Clay, Ricky Seals-Jones and Maxx Williams are the top options, there won't be any pressure to keep a tight end on the field at all times. Of course, it's no sure thing the fourth WR will be a better choice, as the position group is full of question marks behind Fitzgerald and Kirk. Isabella's combination of speed (4.31 40), college production (3,526 receiving yards) and second-round draft status makes him an early favorite for the No. 3 job.

The fantasy value of Andy Isabella is measured by his average draft position (ADP). The graph below shows how it's trending in the latest mock drafts . In recent drafts, Isabella's current ADP is 14.05

Watch out to see if Isabella's value changes in light of this update. 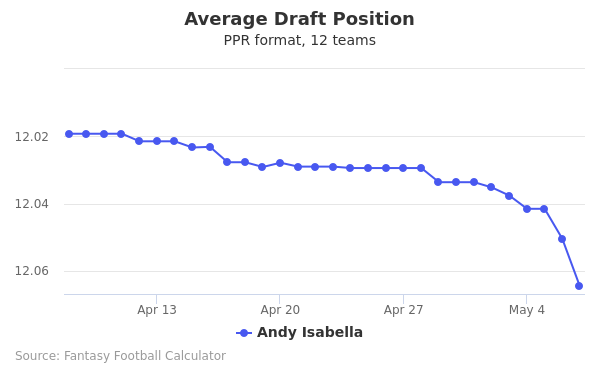 What it means: Falcons owner Arthur Blank and general manger Thomas Dimitroff both have acknowledged their intention to give Jones a new contract, but there's still work to be done on the exact terms. Jones has two seasons remaining on a five-year, $71.25 million deal, putting him 12th among wide receivers in average annual value ($14.25 million), per overthecap.com. The 30-year-old didn't hold out from mandatory minicamp in June, instead watching from the sidelines to avoid aggravating his foot. His history of foot injuries may be a concern in terms of longevity or durability, but Jones should be fine for the start of training camp unless the contract situation leads to a holdout.

The fantasy value of Julio Jones is measured by his average draft position (ADP). The graph below shows how it's trending in the latest mock drafts. In recent drafts, Jones's current ADP is 1.11

Watch out to see if Jones's value changes in light of this update.

Our take: Bryant announced his intent to apply for reinstatement earlier this offseason, and has now officially begun the process. The 27-year-old has reportedly worked with both the NFL and NFLPA in addressing his off the field issues. The former Pittsburgh and Oakland wideout received an indefinite suspension in mid-December of the 2018 season after violating the terms of his April 2017 conditional reinstatement. Less than two weeks before the suspension, Bryant had suffered a season-ending PCL injury. He ended the 2018 season with 19 catches for 226 yards on 27 targets across eight games.