In recent drafts, Henderson's current ADP is 9.01, which indicates that his fantasy outlook is in the 1st pick of the 9th round, and 96th selection overall. 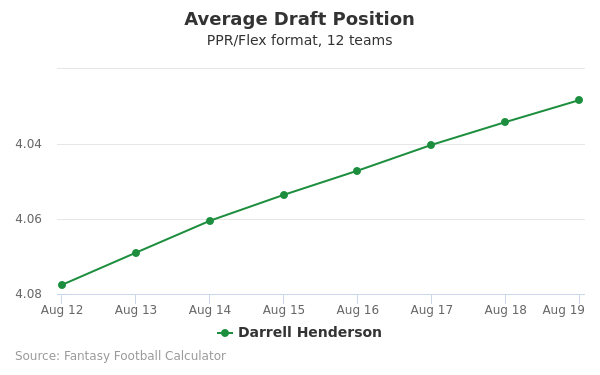 The code below will display a graph that updates every day to show the ADP data for Darrell Henderson for the past 30 days in 12-team PPR leagues.

Henderson rushed four times for seven yards and brought in three of five targets for 43 yards during the Rams' 23-20 win over the Bengals in Super Bowl LVI on Sunday.

Analysis: Activated from injured reserve on Friday after last having played in Week 16, Henderson was still the clear complementary option to lead back Cam Akers in terms of rushing volume. However, the third-year back made an appreciable impact as a receiver, particularly on his catches of 25 and 15 yards in the second and third quarters, respectively. Henderson's knee should be back to full strength early in the offseason if it isn't already, and he and Akers could have quite the competition for the No. 1 running back job in training camp this coming summer.

Another football season is coming to a close, and what better way to celebrate the end of the fantasy year by throwing in some picks to...
Read more »

Should I start Darrell Henderson?