In recent drafts, Allen's current ADP is 2.06, which indicates that his fantasy outlook is in the 6th pick of the 2nd round, and 18th selection overall. 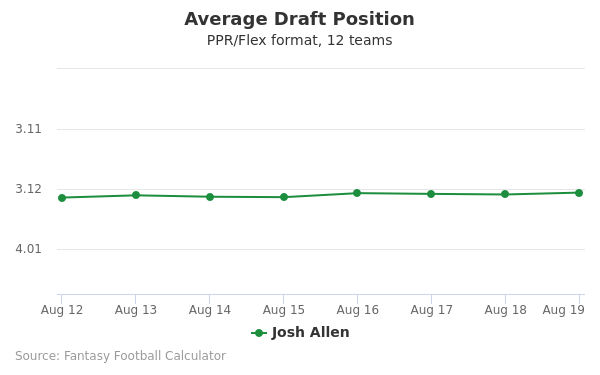 The code below will display a graph that updates every day to show the ADP data for Josh Allen for the past 30 days in 12-team PPR leagues.

Allen completed 27 of 37 passes for 329 yards and four touchdowns in Sunday's 42-36 overtime loss to the Chiefs. He added 68 yards on 11 rushing attempts and threw a two-point conversion.

Analysis: Allen did most of his damage throwing the ball to Gabriel Davis, who finished with 201 receiving yards and caught all four of Allen's touchdown passes. After scoring connections of 18 and 75 yards in the first half, Allen found Davis for a 27-yard touchdown with 1:54 remaining in the fourth quarter. A two-point conversion to the otherwise quiet Stefon Diggs gave the Bills a 29-26 lead, kicking off a wild sequence that saw the two teams combine for 25 points in the final 1:54 of regulation. Allen added a 19-yard touchdown to Davis during that sequence, but the Chiefs kicked a game-tying field goal as time expired. It felt like whichever team got the ball first in overtime would win, and that's exactly what happened, as the Chiefs marched it down the field for a game-winning touchdown after winning the toss, ending Allen's season with a loss at Arrowhead Stadium for the second consecutive season.

Should I start Josh Allen?