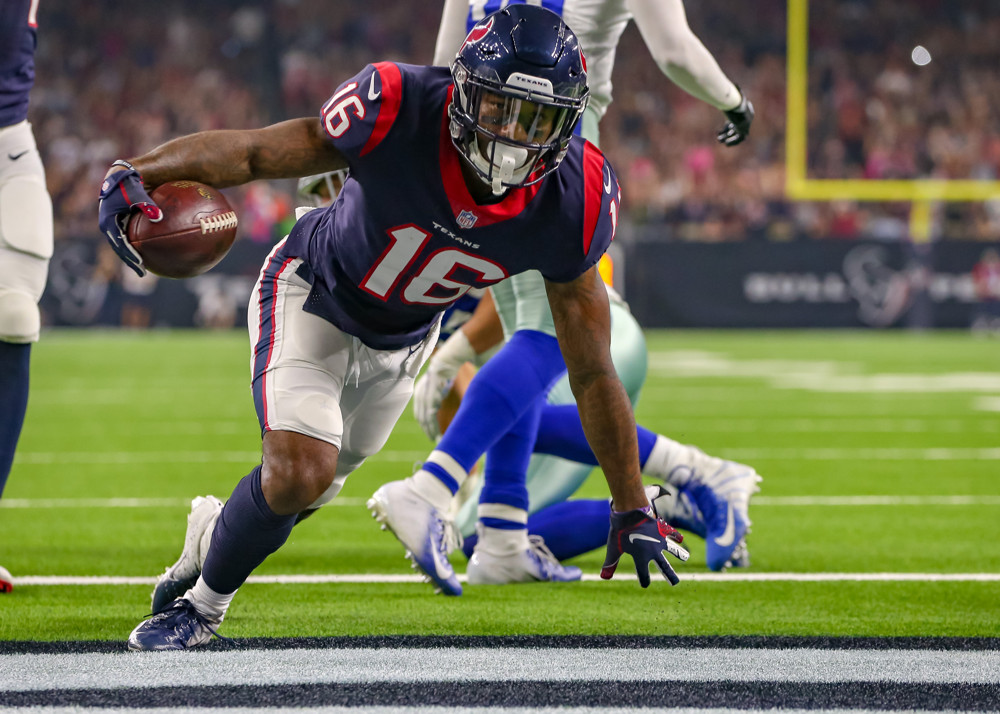 And just like that, we are halfway through the NFL season. Week 8 came and went with few injuries (sorry Will Fuller) and some big games for a few of our waiver wire gems from last week (looking at you Marlon Mack). This week is another somewhat boring waiver wire, but there is still plenty of talent and opportunity out there. For some it may be time to start looking for some deep adds for a playoff run. For others, maybe you just need someone to survive the byepocalypse. No matter what the situation is for you, here are some players to look at for after Week 8.

Peyton Barber has come alive in recent weeks, and an injury to RB Ronald Jones cements his position as the number one running back in Tampa. In Week 8 against the Bengals, Barber rushed 19 times for 85 yards and 1 touchdown. There is no real concern with backup Jacquizz Rodgers taking over the backfield, so Barber is a must own in all leagues as a heavily used runner. Although the QB position is up in the air, Barber should be a solid piece of this offense.

Keke Coutee burst onto the scene in Week 4, catching 11 of 15 targets for 109 yards. The next week, he caught 6 passes for 51 yards and 1 touchdown. Since then Coutee has been absent, mostly due to the resurgence of WR Will Fuller. Unfortunately, Fuller's season is done after tearing his ACL in Week 8. Coutee, currently out with a hamstring injury, should be the #2 WR behind Hopkins once he returns. He may not be back until Week 11 (Week 10 Bye), but after that Coutee will see a lot of middling defenses. Coutee should be added and stashed in all leagues. QB DeShaun Watson looked much better, and Coutee could be a huge benefactor.

Coach Jon Gruden said that Doug Martin would be the feature back, and he proved it in Week 8 against the Colts. Martin rushed 13 times for 72 yards and caught 2 passes for 17 yards. He also lost a fumble. For the first time in a long time, Martin looked good rushing the ball. Unfortunately for him, the Raiders were in a shootout and needed to pass the ball more than run it. RB Jalen Richard was the beneficiary of a majority of those passes, and will continue to be the passing situation back. Martin is a decent flex option in 12 team leagues.

Courtland Sutton was a beast at SMU, and has shown flashes of pure athleticism for the Broncos, catching passes for 42, 41, and 42 yards in various games this season. Sutton is currently the 3rd WR on the depth chart behind Emmanuel Sanders and Demaryius Thomas. However that may change very soon. Sanders is beat up (leaving the last two weeks with injuries) and Thomas has a chance to be traded by the deadline. It would be a huge surprise if the Broncos didn't move one of their older wide receivers this week. Sutton is more of a speculative add in 12-14 team leagues. If he becomes the 2nd WR in Denver, he will be in line for some good games.

I really didn't know who WR David Moore was, but it seems as though Russell Wilson sure likes him because he now has 4 touchdowns in the last 3 weeks. Moore caught 4 of 4 targets for 97 yards and 1 touchdown in the Seahawks' Week 8 win over Detroit. It seems as though Pete Carroll and the Seahawks have switched up their offensive scheme, opting to run it more often and open up the deeper passing game. Hopefully when the Seahawks play better opposing offenses, Wilson will have to throw more than 17 times. Moore is a 14 team league addition.

I can't believe I'm about to get back on this hype train, but there is just no doubt that something is magical behind Fitzpatrick's year. To his credit, Fitzpatrick was benched after one bad game against Chicago. Every other game he has been on fire, tossing up 75 yard touchdowns easily. QB Jameis Winston was being way too casual with his passes, and the Bucs opted for Fitzpatrick. He almost led the team to a massive comeback victory, completed 11 of 15 attempts for 194 yards and 2 touchdowns. No matter what QB starts for Tampa Bay, they need to be owned.

The Jets defense hasn't been great the last few weeks, but before that they were quietly putting up a solid amount of points in fantasy. They have a solid pass rush and a decent secondary, recording a total of 17 sacks, 10 interceptions, and 5 fumble recoveries so far this season. If you are in need for a defense for a few weeks, the Jets are a solid option. They get Miami and Buffalo the next two weeks.